Should Investors Place their Trust in Mexico’s New Deal?

Who is the real Andrés Manuel López Obrador (AMLO)? The man of the people who promises to abolish the “manifest failure and corruption of neoliberal policies”, or the fiscally-responsible statesman who promises a New Deal for Mexico? The answer to this riddle may give some pointers as to the course AMLO will steer over the six years of his presidency.

What is clear is that his election in July 2018 represents a break from the past. AMLO swept into power in the wake of widespread discontent with Mexico’s political elite. To deliver the jobs and social progress he has promised, he needs a business-friendly environment to encourage further investment in an economy that has been stuck in a rut for years. But this sits awkwardly with some of his more populist gestures – such as cancelling a third-built, US$13 billion international airport before he had even formally taken office, aided by an unofficial referendum in which less than 1% of the electorate took part.

The president is attempting a difficult balancing act – one in which he does not hold all the cards. But he does start with much in his favour. His popularity ratings are off the charts (Figure 1), especially following an early crackdown on widespread gasoline theft that costs Pemex[1], the national oil company, around US$3 billion a year. The president’s Morena movement and allied parties also control both houses of Congress.

Markets have looked favorably upon the prudent 2019 budget and initiatives to strengthen and deepen the financial sector and local capital markets. Following the news, Mexican equities, bonds, and the peso rallied. Investors also gave the government an early vote of confidence by oversubscribing a US$2 billion dollar denominated sovereign debt offering in late January. 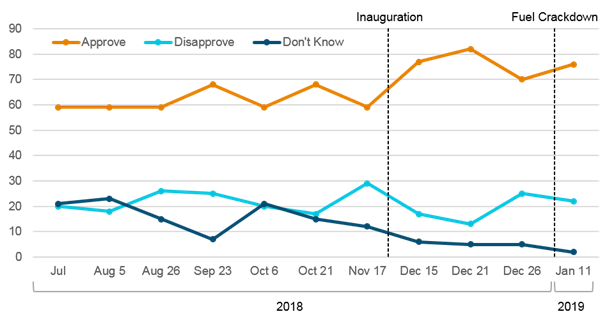 Internationally, the winds are also blowing in Mexico’s favour. A softer US dollar and the US Federal Reserve’s pause on interest rate increases are set to translate into less pressure on Banxico, the Mexican central bank, and could pave a path for less restrictive monetary policy in the coming months.

Ironically for an oil producer, weaker crude prices will help improve Mexico’s balance of payments because the country runs a trade deficit in refined petroleum products. The impact on Pemex and fiscal revenues is negative, but financial hedges have already locked in a meaningful oil price for the year and the government is working on an aid package for the state-owned oil company. Despite US President Donald Trump’s protectionist rhetoric, trade with the US is still buoyant as economic growth there remains solid. Mexico is the US’s third largest trade partner and ran a US$67 billion surplus with its larger neighbor in 2018.

In the short term, therefore, it appears that there are few clouds on the horizon. Longer-term, the skies could darken. Will the president make good on his promises to deliver higher, more equitable economic growth and what might that entail? (Inequalities between the southern states and the rest of the country have become increasingly stark, as shown in Figure 2.) Will he roll back the energy deregulation we saw under the previous administration? Will he be able to keep the leftist elements of his Morena alliance in check? And if the president’s best-laid plans falter, will his populist instincts kick in?

The start of AMLO’s presidency was inauspicious. Markets took fright following the cancellation of Mexico City’s new international airport under construction and a subsequent tussle with the holders of US$6 billion of airport bonds. Matters got worse with moves from some Morena’s allies in Congress – hastily quashed – to scrap banking fees, tap into international reserves, and nationalize private pension schemes. The new government also announced a three-year freeze on auctions for new oil exploration blocks pending the results of previous auctions. AMLO makes no secret of his preference for a state-centric oil sector, and the markets have rightly interpreted the suspension of further auctions as a step back for energy liberalization.

In December, the month in which AMLO took office, the peso tumbled past 20 to the dollar; Banxico raised interest rates by another quarter point to 8.25%, their highest in more than a decade; and some analysts cut their forecasts for 2019 GDP growth to as low as 1%. 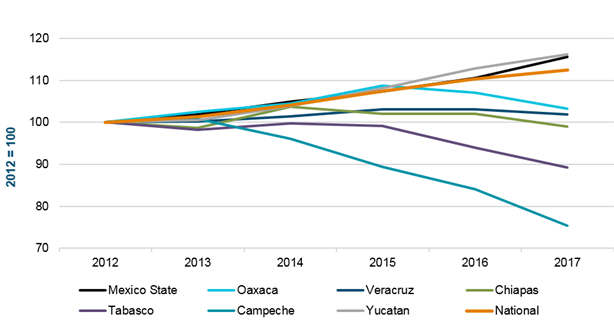 Market jitters had a salutary effect on the new administration. By mid-December, the government had presented a 2019 budget that forecast a primary surplus of 1% of GDP and no new taxes. Finance Minister Carlos Urzúa promised “an absolute commitment to fiscal and financial discipline.” The peso stabilized and the markets rallied. But for how long?

Where are the risks?

The mixed signals coming from the new administration – fanning populist sentiment one moment, trying to be investor-friendly the next – are hardly reassuring. There are also well-founded reasons to doubt the competence of the new administration to deliver on the president’s agenda: outside the Finance Ministry and Banxico, key posts tend to be held by political appointees with little professional experience.

A third set of risks concerns AMLO’s ability to deliver the progressive social agenda on which his popularity rests. To combat crime and youth unemployment, which often go hand-in-hand, the president has promised to create 2.6 million jobs through an apprenticeship program. So far, the private sector has offered only a few thousand placements. Likewise, the government’s investment and growth plans hinge, in large part, on private-sector support which has remained scarce in the face of these mixed messages.

There are also risks outside the country’s borders. For better or worse, the economies of Mexico and the US are deeply intertwined. As the saying goes: when the US sneezes, Mexico catches a cold. The Fed’s more gradual pace of monetary tightening may have won Mexico some breathing space, but a possible slowdown in the US, at a time when fiscal stimulus is running out of steam, could presage hard times on both sides of the border.

A question mark also hangs over the renegotiated NAFTA agreement (the United States-Mexico-Canada Agreement), which has yet to be ratified by legislatures in each of the participating countries. If the Democrat-controlled US House of Representatives subjects the revised treaty to prolonged debate, business sentiment in and towards Mexico might suffer.

What will AMLO do if the economy goes south?

There is much to like in AMLO’s agenda – fiscal austerity, increased investment, and a focus on reducing poverty and youth unemployment. There is also much to be said for investing in Mexico’s forgotten south, which has been in a deep recession for the past five years. But the government’s plan to build a “Mayan train” across several southern states – like much of its infrastructure program – has yet to be hammered out.

Despite all the unanswered questions, AMLO is likely to have a longer honeymoon than most people expect. The president’s popularity and charisma will let him get away with early mistakes: at home, some call him “the tropical Messiah”. His dominant position in both chambers of Congress also leaves few checks and balances to the Mexican president’s already strong executive powers. Nevertheless, we believe the president faces two big risks: that his social programmes fail and his big infrastructure projects never get off the ground. If corruption, crime and violence continue to rise, popular sentiment will also likely turn against the president. The big unknown is what the president’s response will be under pressure.

See all article(s) by Aaron Gifford...