Many investors have the ability to save for retirement with Roth contributions. There are typically two ways to get Roth exposure:

If you can save with a Roth option, it’s important to evaluate whether you may benefit more from pretax or Roth retirement contributions.

If you can save with a Roth option, it’s important to evaluate whether you may benefit more from pretax or Roth retirement contributions.

For someone whose marginal tax rate remains constant from the working years through retirement, choosing between Roth and pretax contributions is a toss-up mathematically,3 but Roth usually wins in a tiebreaker.

Unfortunately, tax rates are hard to predict due to changes in the law, income levels, or both. Consider the following hypothetical taxpayers who may help illustrate the pros and cons of the two types of contributions.

Millie, a single professional in her 20s, is currently in a low tax bracket. But a few promotions at work could easily put her in a higher bracket. Contributing to a Roth IRA or Roth 401(k) means she pays the relatively low rate on taxable income now but will pay no taxes on qualified distributions from the plan when she’s retired. That seems like a reasonable deal, especially since it’s really hard to guess what tax rates will be that far in the future.

Xavier, on the other hand, is approaching his peak earning years. He’s in his 40s and is in a higher tax bracket than Millie. When he retires, his expenses will probably be lower—no more mortgage or college bills. As a result, his income from Social Security and the amount he chooses to draw from retirement accounts may be less than what he earns today. So his federal tax bracket could go down in retirement. His state tax rate could also decrease, for example, if he moves to an income tax-free state like Florida.

For Xavier, taking the tax benefit now with a pretax contribution may make more sense than the Roth option. That’s because he reduces his current taxable income now while paying a higher tax rate and then makes withdrawals later in retirement at a potentially lower tax rate.

Bernard, our third taxpayer, is around 10 years from retirement with a more complicated situation. His tax rate is not likely to fall after he retires. He has been a disciplined saver, contributing a healthy percentage of income to his pretax accounts for many years. After reaching age 72, he must begin taking required minimum distributions (RMDs) from IRAs (and from his 401(k) if he has retired) even though he probably doesn’t need all of that income to live comfortably.

Those RMDs could bump Bernard into a higher tax bracket. Qualified distributions from a Roth 401(k) or Roth IRA, on the other hand, would not create taxable income or increase Bernard’s tax rate. Therefore, a Roth contribution may be preferable for Bernard to limit the RMD income taxed at a higher rate. Since Bernard seems likely to leave assets to heirs, in his situation, it’s especially important to ask a tax or financial planning professional about multigenerational planning.

For people who are unsure which type of contribution may be more beneficial, the tiebreaker should often go to the Roth. Roth accounts are generally better for heirs since assets can continue to grow tax-free. In addition, with the passage of the SECURE Act, most non-spouses who inherit pretax retirement accounts after 2019 will have to take full distribution of those accounts within 10 years. Since those distributions could push beneficiaries into higher tax brackets, leaving them Roth assets may be preferable.

Having a meaningful level of Roth assets helps retirees manage taxes effectively. Since the Roth 401(k) is a relatively recent development, many people haven’t amassed significant balances and could benefit from building them now. (The Roth IRA has been available for more than 20 years, but it has lower contribution limits and restrictions on high-income taxpayers.)

For people who are unsure which type of contribution may be more beneficial, the tiebreaker should often go to the Roth.

A person’s ability to save could be another factor. If prodigious saver Patricia can contribute the maximum level to a retirement plan, the Roth option effectively enables her to save more in a tax-advantaged manner. Saving the maximum ($19,500 for 2020 or $26,000 for someone over age 50) ultimately results in more after-tax retirement assets for Roth contributions than pretax contributions.

On the other hand, for someone struggling to save like entry-level Edward, the pretax approach may enable him to get the employer’s full 401(k) match with less impact on take-home pay because taxable income is reduced by the amount of his contribution.

Of course, the most important factor in reaching your financial goals is how much money you save. We recommend saving at least 15% of gross salary for retirement each year, including any employer match. That said, using different strategies like Roth and pretax contributions wisely can make a difference.

Before deciding on any strategy, we recommend discussing it with a tax accountant or financial planner.

Who Benefits From Roth or Pretax?

1Designated Roth accounts may also be offered in 403(b) and governmental 457(b) plans.
2Generally, a distribution is qualified if taken at least 5 years after the year of your first Roth contribution and you’ve reached age 59½.
3Kutner, George W.; Doney, Lloyd D.; Trebby, James P. Investment Performance Comparison Between Roth And Traditional Individual Retirement Accounts. Journal of Applied Business Research (JABR), [S.l.], v. 17, n. 1, Feb. 2001. ISSN 2157-8834. Available at: cluteinstitute.com/ojs/index.php/JABR/article/view/2064. This analysis directly compares Roth and pretax contributions that result in equivalent impact on after-tax pay at the time of contribution. For most people, our view is that this methodology is more realistic than one that assumes an individual will fund a taxable account with the tax savings generated by a pretax contribution.
4Brackets are for federal taxes, based on rates as of January 1, 2020. While rates are scheduled to revert to pre-2018 levels after 2025, those rates are not shown in this table. Note that reversion to generally higher rates in the future would make Roth savings relatively more favorable today. Income refers to gross earnings; current bracket reflects the standard deduction and potential retirement contributions. State taxes are not considered in the examples. Married status reflects joint filing.
5Based on 5.35% RMD at age 80 on a $3.2 million balance. The steady balance assumes earnings on the account until that point have been sufficient to fund withdrawals.

This material has been prepared by T. Rowe Price for general and educational purposes only. This material does not provide fiduciary recommendations concerning investments, nor is it intended to serve as the primary basis for investment decision-making. T. Rowe Price, its affiliates, and its associates do not provide legal or tax advice. Any tax-related discussion contained in this material, including any attachments/links, is not intended or written to be used, and cannot be used, for the purpose of (i) avoiding any tax penalties or (ii) promoting, marketing, or recommending to any other party any transaction or matter addressed herein. Please consult your independent legal counsel and/or professional tax advisor regarding any legal or tax issues raised in this material.

The views contained herein are those of the authors as of February 2020 and are subject to change without notice; these views may differ from those of other T. Rowe Price associates. All investments involve risk. All charts and tables are shown for illustrative purposes only.

Retirement plans and IRAs should be considered long-term investments. Both retirement plans and IRAs generally have expenses and account fees, which may impact the value of the account. Nonqualified or early withdrawals may be subject to taxes and penalties. Maximum IRA contributions are subject to eligibility requirements. For more detailed information about taxes, consult a tax advisor regarding personal circumstances.

Find an IRA to Fit Your Needs
Learn More 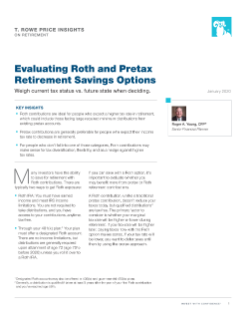 Should I Do a Roth Conversion?
Deciding whether to convert assets to Roth involves consideration around the amount of taxes you will pay on the conversion amount and whether the money will ultimately be passed on to your heirs.  Read more...