Many retirees fear outliving their money, but those fears are likely overstated

There is a perception among many retirees that health care expenses mostly associated with long-term care will spike near the end of life leaving them penniless. This becomes even more concerning if there is a surviving spouse. New research from T. Rowe Price finds that 65% of retirees are concerned about the cost of long-term care, services (i.e., nursing home, assisted care and home health care), and 51% are concerned about out-of-pocket health care expenses.1

With that in mind, fear of these unknown costs could be having an effect on retiree spending patterns. Other research around retiree spending shows that many retirees cautiously spend their money.2 In particular, those with higher assets tend to spend down at a slower rate.

This behavior is likely driven by uncertainty on many fronts, such as market risk, longevity risk, and the future cost of medical care and long-term care. It’s more about fearing the storm of the century than a rainy day. That’s not surprising given the median annual cost of a semi-private room in a nursing home tops $90,000, and the median assisted living charges now approach $50,000 a year.3

But could the fear be overblown? Not every retiree spends a year or more in a nursing home or assisted living facility. While some short-term stays in nursing homes and assisted living are covered under Medicare, it is the care that is not covered that is responsible for high out-of-pocket costs.

So, a natural question is, how much do people really pay out-of-pocket for their health care late in life and what are the actual chances that someone exhausts their finances as a direct result of those expenses?

In order to better understand what retirees can expect to pay for out-of-pocket expenses—including nursing home care—during the last two years of life, we examined data from the Social Security Administration-sponsored Health and Retirement Study.4

We excluded from our calculations:

We then looked at the out-of-pocket expenses during the last two years of life and how likely these expenses are to exhaust retirees’ assets. We also examined how these expenses vary by gender as well as the likelihood that surviving spouses would be left penniless. 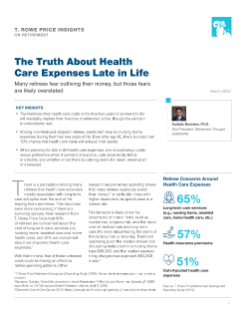 Many retirees fear outliving their money, but those fears are likely overstated.

4 Health and Retirement Study, public use data set. Produced and distributed by the University of Michigan with funding from the National Institute on Aging (grant number NIA U01AG009740). Ann Arbor, MI.

The views contained herein are those of the authors as of March 2020 and are subject to change without notice; these views may differ from those of other T. Rowe Price associates.

Sudipto Banerjee is a senior manager in the Retirement Thought Leadership Group within Global Brand Marketing of T. Rowe Price. He is also a vice president of T. Rowe Price Associates.