Earlier this year, we reduced credit risk in our international and global multi‑sector bond portfolios. Credit spreads1 were very tight by historical standards, growth was shaky, and central banks were about to start tightening monetary policy to tackle inflation. The prospect of spread widening—which would reduce the value of corporate debt relative to high‑quality government bonds—was very real. So we decided to cut our exposure.

...if anything, the outlook for credit has deteriorated since we reduced our exposure...

Despite the cheap valuations on offer, we do not believe that now is a good time to add credit back to our funds. Why? Because, if anything, the outlook for credit has deteriorated since we reduced our exposure to the asset class a few months ago. There are two main reasons for this. First, the global growth outlook has declined since Russia invaded Ukraine and COVID‑19 cases surged in China, and second, central banks seem even more determined to tighten policy to keep inflation under control. This combination of weak growth and tighter monetary policy means there is little reason to believe that a sustained credit rally is possible.

History tells us that rallies in credit have been preceded by an actual or anticipated easing of monetary policy. Whenever credit spreads have widened over the past 30 years, the peak in spreads (i.e., the point at which they stop widening before narrowing again) have almost always been immediately preceded by a rally in five‑year U.S. Treasury yields (Figure 1). This typically happened because spreads widened due to concerns about economic growth, and the usual response of central banks to growth concerns is to ease monetary policy—which creates the conditions for a credit rally. But this hasn’t been happening this time: Central banks are clearly so concerned about inflation that yields continue to climb. 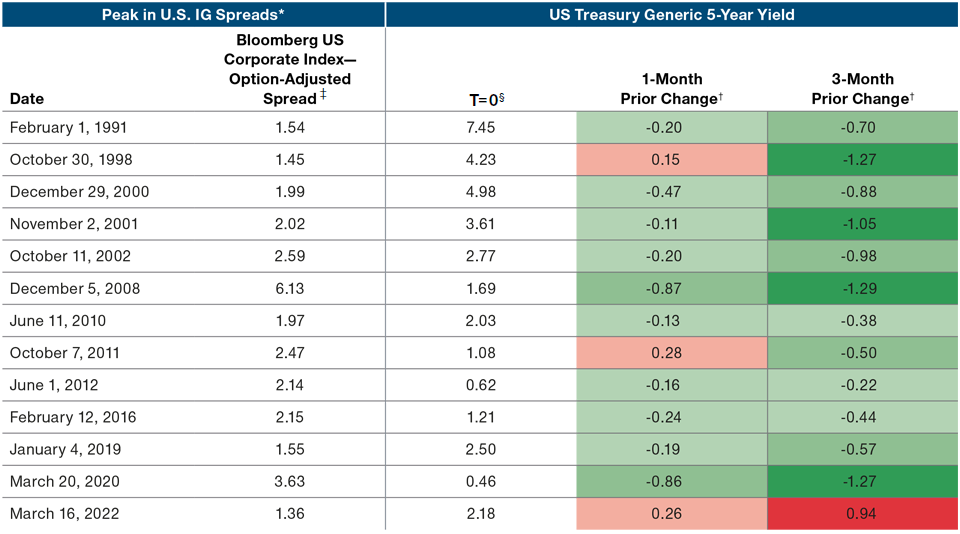 As of March 16, 2022.
Past performance is not a reliable indicator of future performance.
*The peak in US IG spreads was taken as the highest weekly closing spread among weekly closing spreads in the three months prior to, and following, the peak.
† Change in yield in percent.
§ Represents yield in percent on the date of the credit spread peak.
‡ Option‑adjusted spread is credit spread adjusted for any early redemption options.
Source: Bloomberg Finance L.P

...the current period sticks out like a sore thumb...

1 Credit spreads measure the additional yield that investors demand for holding a bond with credit risk over
a similar‑maturity, high‑quality government security.

Parallels to the 1973 Market Shocks May Be Imprecise
Next Article

Tight spreads and hawkish central banks are a concern.