How Value Can Benefit From a New Investment Cycle

Four factors set to drive a boom in capital expenditure

The changing of the guard in terms of value versus growth has been attributed to the post‑pandemic recovery, decade‑high inflation, and the potential for aggressive monetary tightening. However, as bottom‑up investors, we are excited about the potential for a new capital investment cycle forming after many years of underinvestment. For value investors, this is a positive development, as increased spending can be a significant source of investment opportunities.

...we are excited about the potential for a new capital investment cycle forming after many years of underinvestment.

Case for a New Investment Cycle

Since the global financial crisis (GFC) in 2008, we have seen large‑scale underinvestment from both corporates and governments. Both policymakers and companies have focused on repairing balance sheets. Many industries have invested only at “maintenance capex levels,” rather than investing to improve productivity or expansion (Figure 1).

After Years of Underinvestment, a New Capex Cycle Is Forming

(Fig. 1) Many companies have been investing only at maintenance capex levels

We believe many industries are now long overdue investment, after many years of neglect. A good example is the shipping industry, which has seen a dire lack of investment for years—from port capacity to ships. As the world recovered from the pandemic and demand returned, the industry has struggled due to the lack of investment. This has caused a backlog at ports and a sharp rise in container prices.

We have heard phrases like “build back better” and “leveling up” as governments seek to recover after the pandemic. However, we have seen a chronic lack of investment at a top‑down level ever since the GFC, despite an era of ultralow financing costs. There are a number of interrelated reasons for this, but a major one has been the anemic economic rebound we have witnessed after the financial crisis. In previous economic cycles, economic recoveries have been much stronger, but economic growth in recent years has frequently undershot expectations. Meanwhile, at a corporate level, the lack of demand anticipated by companies is likely the reason for the past lack of investment spending. Businesses that aren’t predicting higher demand are less likely to invest.

...we believe the inflationary environment can be the catalyst to drive increased spending and awaken entrepreneurial spirits....

Looking forward, with the cost of everything going up (including wages), we believe the inflationary environment can be the catalyst to drive increased spending and awaken entrepreneurial spirits (at both a company and government level). We have identified both near‑ and long‑term reasons why a capex boom could be underway.

Inflation and fiscal spending to drive investment in the near term, while deglobalization and the green transition should support capex in the future

Returning demand after the pandemic has met with disrupted supply chains, whether that be through China’s zero‑COVID policy (periodically closing important manufacturing hubs) or Russia’s invasion of Ukraine (sending energy and agriculture prices sharply higher). Although we expect inflation to peak at some point as demand destruction takes hold, it is likely, in our view, to settle back at higher levels than experienced in the post‑GFC environment.

...heightened geopolitical friction is likely to prove inflationary as tensions remain elevated and supply chains continue to be disrupted.

A major factor will be what we are calling “geopolitical inflation.” We believe it is unlikely that the conflict in Ukraine will be resolved quickly, and geopolitical tensions have also risen between China and Taiwan and—subsequently—China and the U.S. This heightened geopolitical friction is likely to prove inflationary as tensions remain elevated and supply chains continue to be disrupted. However, these inflationary pressures should encourage firms and governments to invest sooner—given that delaying would mean higher costs in the future.

We expect greater fiscal spending and investment to support economies, especially as countries move through a difficult part of the economic cycle. This is likely to come in the form of increased handouts to consumers (tax cuts, energy caps) and greater spending on infrastructure projects to help drive growth. Both of these are inflationary unless they are managed in a fiscally neutral way.

Infrastructure is very much the backbone of any economy and helps to provide the framework for both economic growth and modernization, but it has been neglected for many years. Historically, expenditure on infrastructure has been the primary responsibility of governments or policymakers, but governments are increasingly entering into public‑private partnerships with companies.

Importantly, the inelastic demand, high barriers to entry, and monopoly‑like characteristics of many infrastructure and utility assets mean that their financial performance is not as sensitive to economic cycles as others. These companies also tend to offer higher pricing power and, therefore, better inflation protection.

Deglobalization is already underway. We first heard about the potential in 2018 when the U.S.‑China trade war ignited, but concerns have increased with the onset of the Russia‑Ukraine conflict and supply chain disruptions stemming from the pandemic. This has focused policymakers’ minds on securing supply chain independence. With companies struggling to manufacture and deliver products throughout the pandemic, many companies are now telling us of their plans to regionalize, or “onshore,” their supply chains, despite the potential economic ramifications.

Many countries have set ambitious carbon reduction targets, but achieving them will require huge levels of investment. China is a great example, being the world’s largest fossil fuel emitter. Currently, China imports 73% of its oil and 42% of its gas needs (Figure 2). However, it has plans to take advantage of its dominance in solar and wind capacity to make greater use of renewable energy that will allow it to become much more self‑sufficient. With China having spent around USD 12 trillion during its supercycle from 2000 to 2010 (building roads, bridges, airports, and other infrastructure projects), it is now forecast to spend almost USD 16 trillion on its green transition to meet its carbon neutrality goal by 2060. 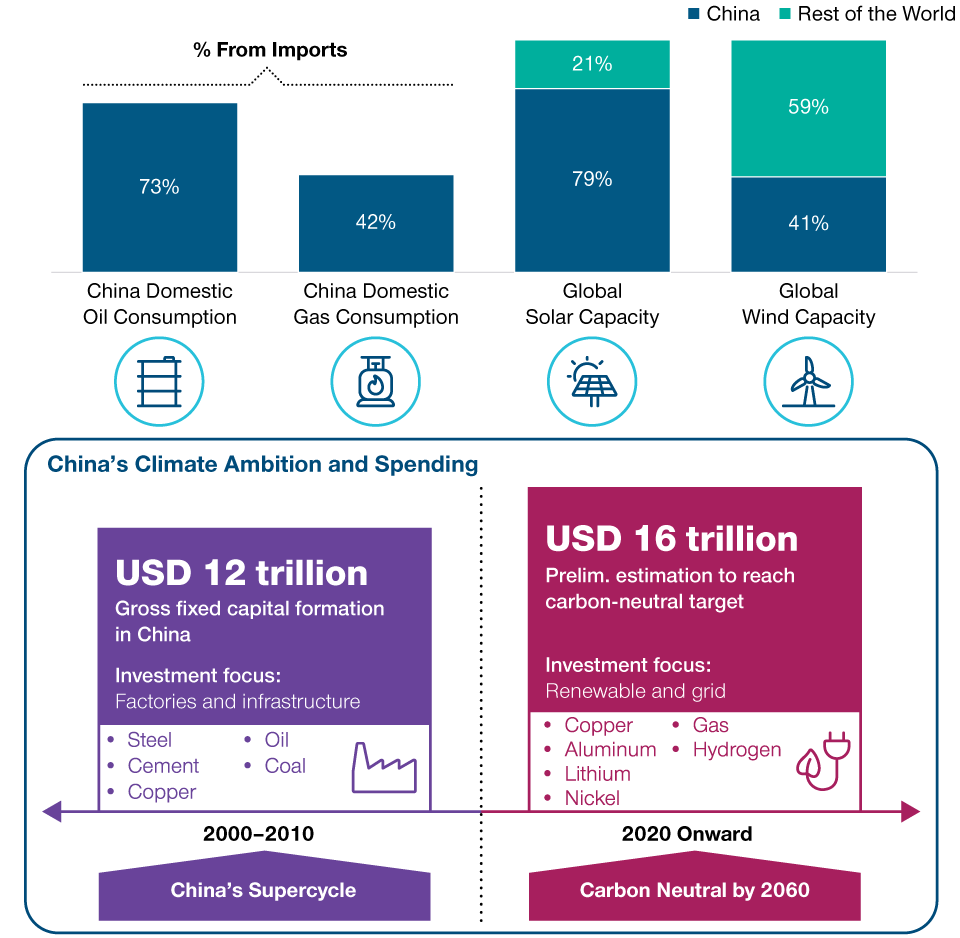 With a new capex/investment cycle in the offing, we expect this to support earnings growth, particularly in areas like utilities and industrials. Meanwhile, with inflation likely to remain elevated, we expect central banks to continue to raise interest rates, benefiting financials—banks in particular. With financials, industrials, and utilities making up large parts of the value investment universe, we are excited about the potential opportunities that lie ahead.

Webinar replay: Selectivity and a Steady Hand Amid Uncertainty
Next Article

See all article(s) by Ernest Yeung... 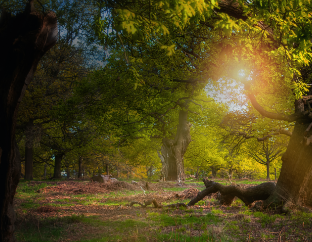 What does the future look like for Value investors post-COVID?