Tenth annual Parents, Kids & Money Survey found that young adults who received financial education when they were in school are more likely to have a budget, an emergency fund, and retirement savings

The survey, which typically samples parents of 8- to 14-year-olds and their kids, was conducted differently in 2018. For its tenth publication, the survey sampled young adults ages 18 to 24, a cohort who would have been in the age range of kids studied when the survey was first conducted. By surveying 1,000 young adults and 1,013 parents of 8- to 14-year-olds nationally, the research revealed new findings on the effectiveness of financial education in schools and homes, as well as where both are falling short.

“‘Adulting’ may be a bigger challenge for those who didn’t receive any financial education at school or home as kids since they’re less likely to have a budget, an emergency fund, and retirement savings,” says Stuart Ritter, a senior financial planner at T. Rowe Price and father of three. “When I worked on the first Parents, Kids & Money Survey in 2009, we learned then that more than half of parents were worried that they could be doing more to prepare their kids to be financially competent by the time they reached adulthood. Over the years, we’ve found that financial education works best when schools and parents work together to help kids understand money matters.

“We know that many parents have some reluctance to discuss money matters with their kids and that, oftentimes, kids begin making, spending, and saving money before parents or educators have helped them understand how it works. There’s an opportunity for parents and educators to have money conversations more consistently, sooner, and broaden the dialogue to include longer-term goals.”

To help educators and parents have money conversations, the firm created MoneyConfidentKids.com, which provides free online games for kids; tips focused on financial concepts such as goal setting, spending versus saving, inflation, asset allocation, and investment diversification; as well as classroom activities. 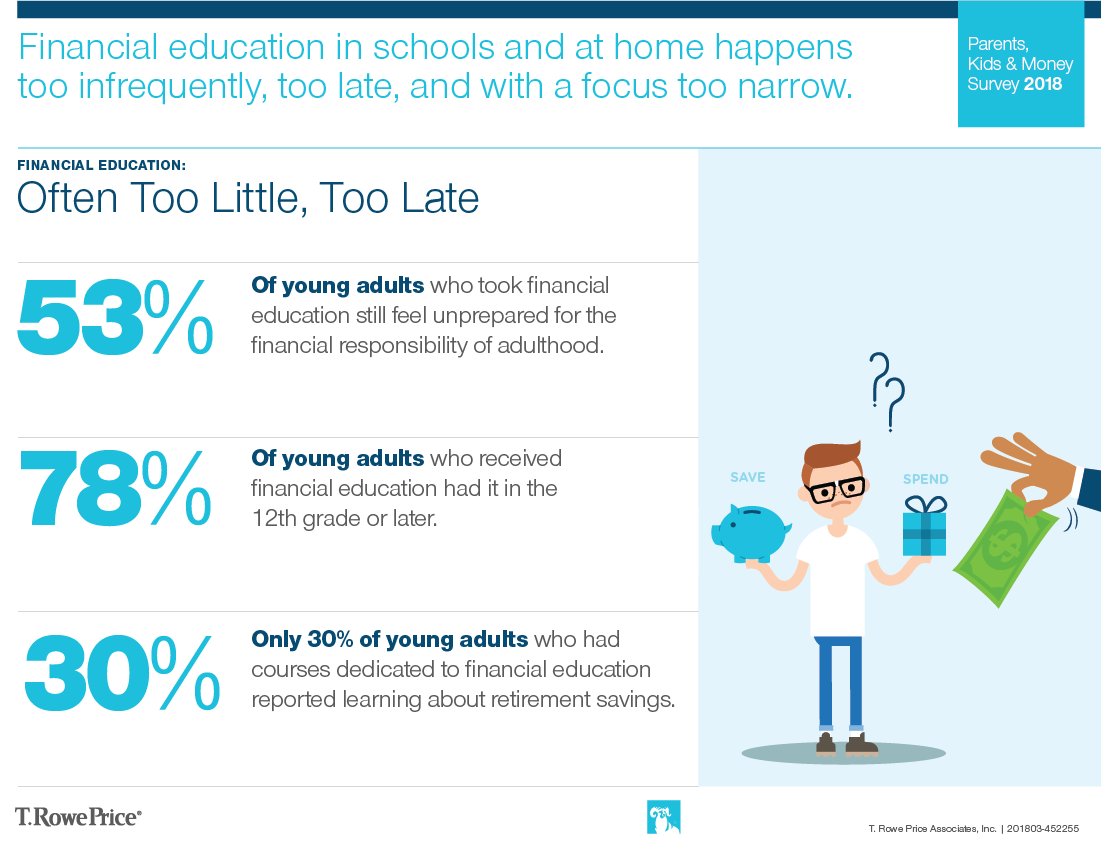 RETIREMENT SAVING IS, REGRETTABLY, ABSENT IN MOST FINANCIAL EDUCATION

The tenth annual T. Rowe Price Parents, Kids & Money Survey, conducted by Research Now, aimed to understand the basic financial knowledge, attitudes, and behaviors of both parents of kids ages 8 to 14 and young adults ages 18 to 24. The survey was fielded from January 16, 2018, through January 23, 2018, with a sample size of 1,013 parents and 1,000 young adults ages 18 to 24. The margin of error is +/- 3.1 percentage points. All statistical testing done among subgroups (e.g., those who had financial education vs. those who did not) is conducted at the 95% confidence level. Reporting includes only findings that are statistically significant at this level.