Leaning Against the Wind

In the face of challenging headwinds, a careful contrarian approach could offer potential for investors.

Soaring bond yields largely drove equity bear markets in 2022 by compressing valuation multiples. But in 2023, earnings growth could move to the top of the list of investor concerns.

As of the end of November, forward consensus estimates predicted mid‑single‑digit growth in earnings per share (EPS) for the U.S. and Japan over the following 12 months, and even slower EPS growth in Europe and the emerging markets (Figure 3, right).

Those estimates appear overly optimistic, Page cautions. Past U.S. recessions typically have resulted in 15% to 20% earnings declines for the S&P 500 Index, he notes.

Thomson lays out three possible U.S. earnings scenarios, the first reflecting a soft landing, the second a “normal” recession, and the third a recession plus a reversal in a 25‑year trend toward higher U.S. profit margins.

Although U.S. equity valuations declined sharply in 2022, the price/earnings ratio (P/E) for the S&P 500 remained relatively high historically as of the end of November, Page notes (Figure 3, left). Excess liquidity and demand from passive investors could be propping up the index’s P/E, Page suggests, leaving it vulnerable to further compression if earnings disappoint.

Thomson notes that growth fears in 2022 boosted the popularity of stocks with relatively low historical exposure to market volatility and of “durable growers”—companies with track records of delivering relatively stable revenue and earnings growth. Both groups now appear overvalued, he says.

The trend toward higher inflation and interest rates, Thomson contends, marks a “regime change,” a structural shift with major implications for relative performance.

Equity Valuations Are Cheaper, but Earnings Growth Estimates Have Decelerated 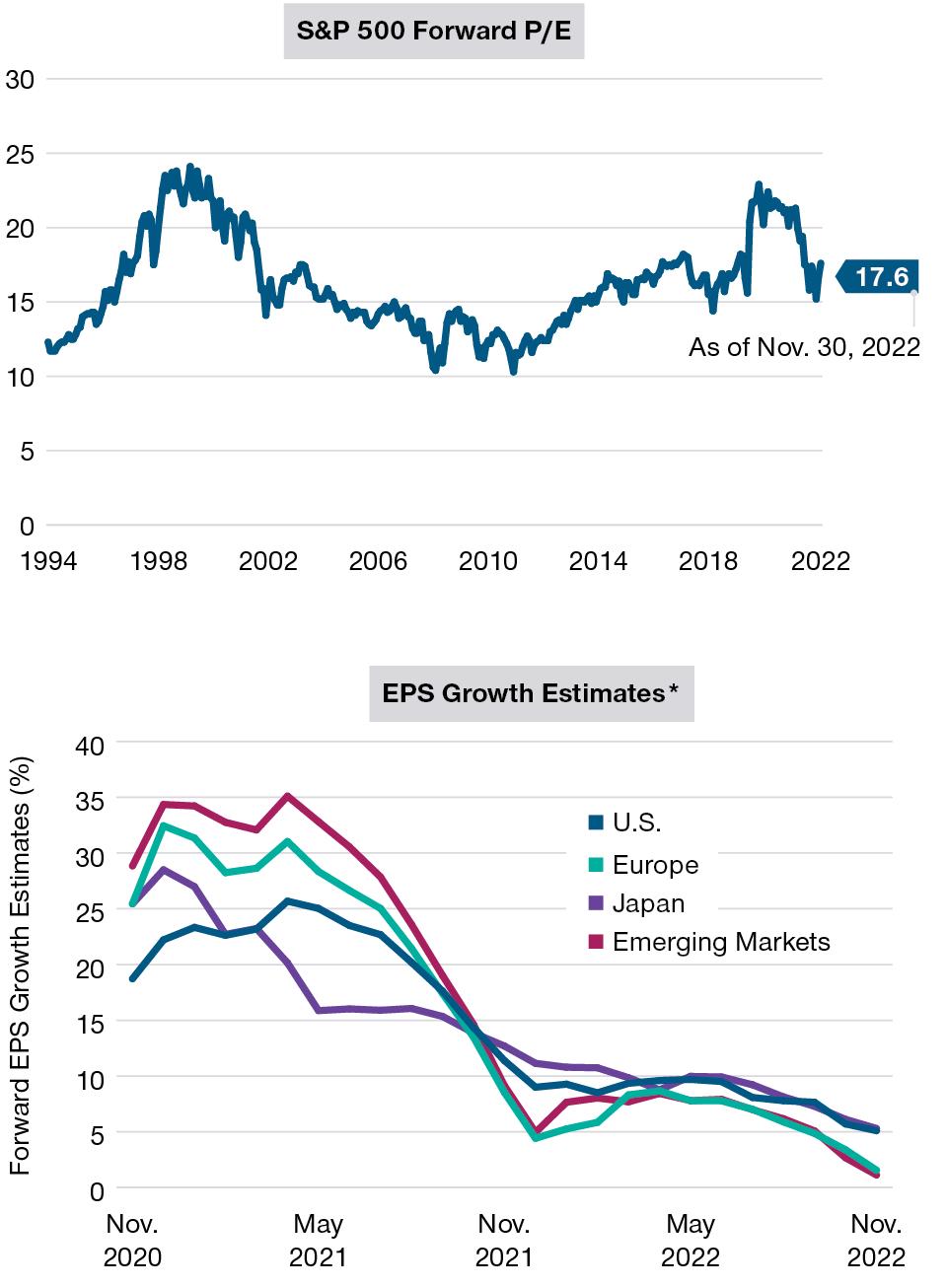 “We know from history that regime changes nearly always are associated with changes in market leadership,” he says.

We know from history that regime changes nearly always are associated with changes in market leadership.

The value style should be a long‑term beneficiary of this rotation, Thomson predicts. “I think we’re probably still in the early innings of this value cycle.”

As a group, value stocks historically have outperformed growth stocks in high‑inflation periods, Page notes. One reason: Higher inflation tends to push up interest rates, fattening lending margins for banks, which carry a heavy weight in the value universe.

U.S. small‑cap stocks also could offer relative performance advantages if the U.S. economy doesn’t fall into deep recession in 2023. On average, small‑cap earnings have recovered more quickly than large‑cap earnings in past economic recoveries, Page points out. U.S. small‑cap valuations also appear cheap, both in historical terms and relative to large‑caps, he adds.

Thomson, however, cautions against painting the small‑cap universe with too broad a brush. “It’s a diverse asset class,” he notes. “The more cyclical parts should do well coming out of a recession. But small growth is likely to do less well.”

Japan could be a less obvious beneficiary of these trends, Thomson says. If higher consumer inflation bleeds through into wage growth, it could shock the economy into a higher level of domestic demand, which would be good for Japanese equities.

The Outlook for Japan Remains Finely Poised
Next Article