Japan Ups the Ante on Corporate Governance and Regulatory Reform

One of the most significant achievements of former Prime Minister Shinzo Abe’s “Abenomics” economic reform strategy has been the improvement in Japanese corporate governance standards. The government’s prioritizing of corporate sector reform—a policy pursued with equal vigor by new Prime Minister Yoshihide Suga—has been an important influence in boosting Japanese corporate performance, as well as returns for investors. Moreover, the concepts of best practice; robust environmental, social, and governance (ESG) disclosure; and improved stakeholder engagement have been recently highlighted as central to long‑term sustainability.

Measuring the impact of governance and regulatory reform is no exact science, but a key aspect of the improvement seen in Japan has been the introduction of stewardship and corporate governance codes, in 2014 and 2015, respectively. These regulatory guidelines have effectively provided a framework for improvement for Japanese companies—a road map to becoming more economically productive, globally competitive, and better positioned to attract international investment. The recent revision of Japan’s Stewardship Code and Corporate Governance Code, in 2020 and 2021, respectively, provides an opportune time to revisit the progress made to date, expectations moving forward, as well as some of our own firsthand engagement experiences with Japanese companies and regulatory bodies alike.

With this in mind, it is worth delving deeper into some of the key areas of regulatory changes, as targeted in the 2020 revision of the Japanese Corporate Governance Code.

Board independence levels continue to be an area of increasing importance in Japan. Governance codes currently include increased external director representation on Japanese company boards (at least two independent directors required, with a recommended level of one‑third representation) and improved diversity at both senior management and boardroom levels.

Boardroom Independence in Japan Has Improved 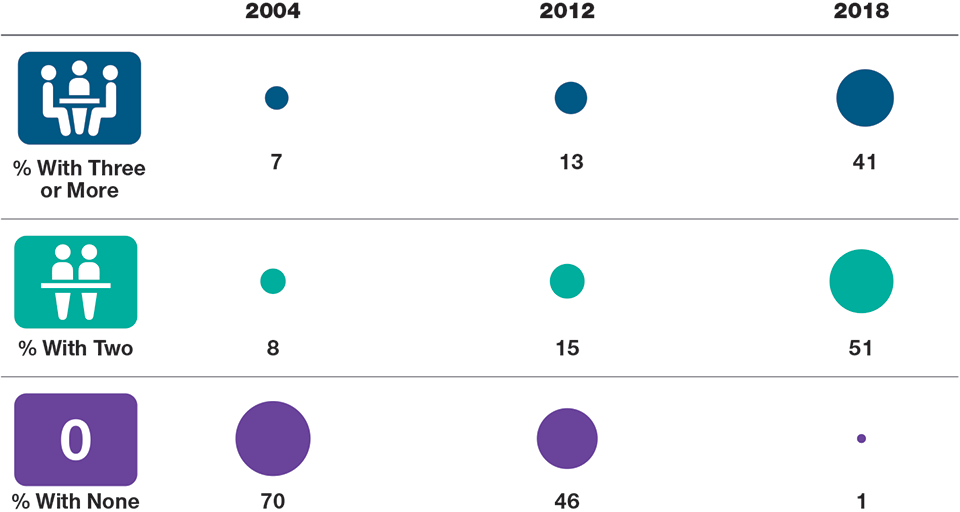 Certainly, where director independence is concerned, clear progress has been made, with more than 90% of TOPIX‑listed companies boasting two or more independent directors on their boards more recently. Companies are recognizing the value of appointing independent directors, bringing fresh ideas and new skills, and providing a wider, more diverse, range of experience and knowledge. The increase in outside representation is certainly positive and signifies crucial progress in moving Japan closer to global best practices. However, it is not enough on its own. We believe a more holistic approach is necessary, looking at a company’s whole governance structure, the separation of powers, and a board that is acting in the best long‑term interests of shareholders.

The Japanese Corporate Governance Code includes a direct reference to diversity, stating that boards must have a level of gender and international diversity to ensure they can operate effectively. For our part, at T. Rowe Price, we have also formalized our position on gender diversity within our Proxy Voting policy, a central tenet of which is to generally vote against any Japanese company with no female board representation.

Five years ago, in 2016, the percentage of women directors represented on Japanese company boards was just 4.8%.1 However, the government has vowed to rectify this situation, targeting certain industries in particular. Greater regulatory demands have been placed on the energy and utilities sectors, for example, where companies continue to lag behind global market peers when it comes to boardroom diversity. Progress is slow, but inroads are clearly being made. In 2020, the percentage of female company directors in Japan has more than doubled, to 10.7%.1

Beyond the boardroom, greater representation of women in senior management is also being championed by the government, seeing increased female workforce participation as a potential solution to Japan’s demographic shrinkage and a potential boost to productivity (Figure 2). Diversity is an issue that we continue to engage with companies we are invested in about extensively, providing guidance on best practices and the potential benefits to long‑term performance, as well as pushing for improved levels of disclosure.

Corporate cross‑shareholdings have been directly referenced in the most recent update of the Stewardship Code, calling for additional corporate disclosure on the practice. Capital misallocation and reduced market discipline resulting from complicated company cross‑shareholdings have long been viewed as among the most serious corporate governance problems in Japan. It is not uncommon for Japanese companies to own large shareholdings in other companies for reasons unrelated to pure investment purposes, for instance, in order to strengthen relationships with customers, suppliers, or borrowers. The practice, which is often criticized for supporting underperforming companies, reducing company returns on equity through inefficient capital allocation, and insulating management teams from shareholder interests and engagement, has been under regulatory scrutiny for years. And definite progress has been made. Cross‑shareholdings as a percentage of total market capitalization were well above 30% at their peak in the early 1990s, but this level has progressively declined since then and today sits at around 10%.2 This positive trend should continue to reduce the protection of underperforming management teams and free locked‑up capital so that it can be more efficiently deployed elsewhere.

(Fig. 2) Efforts to boost the number of women in the workforce are working

Notably, the Tokyo Stock Exchange has deliberately restructured in order to force directors of companies involved in these cross‑shareholding networks to sell down these holdings. Similarly, leading proxy research provider, International Shareholder Services, is implementing strict new voting guidelines against companies that continue to engage in the practice. It has recently detailed plans to vote against management of any companies with more than 20% of net asset value tied up in cross‑shareholdings. This marks a step up in action against the practice. Where previously companies just had to disclose cross‑shareholding data, they are now being held to account.

While it will take time to eliminate cross‑shareholdings completely, with pressure from industry bodies and a regulatory focus on challenging vested interests likely boosting capital efficiency and improving returns potential, the direction of travel is positive.

Large institutional investors, and a growing number of activists, are placing ever greater emphasis on climate change in 2021, not only in Japan, but globally. With this in mind, in October 2020, the Japanese government pledged that the country would achieve net zero carbon emissions by 2050. This ambition is similarly reflected in the corporate governance regime. As a result, we are seeing an increase in carbon emissions disclosure from Japanese companies, not yet to the levels displayed in Europe, for example, but a clear improvement, nonetheless. That said, our own engagement with Japanese companies on ESG disclosure reveals an interesting paradox. While Japan leads the world in terms of the number of companies signed up to the Task Force on Climate‑Related Financial Disclosures—the globally recognized benchmark—until the recent net zero announcement, most companies’ disclosure reporting was actually fairly average, both in terms of level of detail as well as a lack of actionable items.

The focus on corporate sector reform has been a key influence in the rise in company earnings and profitability seen in recent years. Japanese companies are allocating capital more efficiently; instead of maintaining inefficient balance sheets with high cash stockpiles, companies are putting their sizable reserves to work by buying back shares and paying higher dividends.

The focus on corporate sector reform has been a key influence in the rise in company earnings and profitability seen in recent years.

And evidence of the improvement in shareholder returns is plain to see. The level of share buybacks by Japanese companies reached a record high in 2019, as both regulators and management teams looked to deliver higher returns to shareholders.

The quality of Japanese companies, in terms of governance standards, profitability, and, ultimately, returns paid to investors, has continued to visibly improve, closing the gap with European and U.S. equity markets. Companies have been allocating capital more efficiently, paying higher dividends, and increasing share buybacks, and these improved returns have been attracting greater foreign investment.

The quality of Japanese companies, in terms of governance standards, profitability, and, ultimately, returns paid to investors, has continued to visibly improve...

We believe this focus on improvement will only gather pace, creating both risks and opportunities for companies as they respond to, or fall behind, the pace of change. We believe that an active management approach can be quick to identify these potential winners and losers and allocate investment accordingly within an investment portfolio.

At T. Rowe Price, our company engagement programs have always been driven by our fundamental research and supported by local market expertise. In recent years, our research platform has been bolstered by substantial investment in our dedicated ESG research team, which provides proprietary analysis to integrate into our investment decision‑making. This provides us with a deeper understanding of potential ESG risks or opportunities in our investment universe and identifies prospects for engagement among our portfolio holdings. Combined with the deep expertise of our nine‑member Japanese equity research team, we believe this positions us well to actively respond to the ever‑evolving investment needs of our clients.

The Eurozone Faces an Inflation Roller Coaster
Next Article

Archibald Ciganer is the portfolio manager for the Japan Equity Strategy, having previously covered the telecom, transportation, utility, media and consumer sectors as a research analyst in the Equity Division.