T. Rowe Price: Parents Are Likely To Pass Down Good And Bad Financial Habits To Their Kids

T. Rowe Price’s 2017 Parents, Kids & Money Survey, which sampled 1,014 parents of 8 to 14 year olds nationally and their kids, analyzed parent attitudes and behaviors that were associated with kids’ financial habits. The survey found that positive money behaviors and expectations among kids are often associated with parents’ decision to let their kids decide how to save and spend their money on their own, as well as modeling good financial habits. Conversely, troubling financial habits among kids were more frequently seen when parents have a troubling history with money.

“Kids who have the freedom to manage their own money seem to have better money behaviors and are more truthful with their parents about how their money was spent,” says Roger Young, a senior financial planner at T. Rowe Price and father of three. “I know firsthand the temptation of helicopter parenting, but there is evidence of a downside to this approach when it comes to money. More than three-quarters of the kids who manage their own money say that they have money conversations with their parents. Giving them real life money experiences brings finances out of the conceptual and puts it into practice.

“We know that kids’ money habits are formed before they get to high school and that their parents are often their most influential teachers. It’s unsurprising, but still saddening, that parents with troubling money habits seem to be passing them on to their kids. These parents are hit with the double consequences of their own financial mistakes and the prospect that their kids may be set up to relive them.

“To prevent this, parents may want to consider openly discussing their finances with their kids—the good, the bad, and the ugly. Kids who are aware of their parents’ bankruptcy are more than twice as likely to say that they are very or extremely smart about money compared with those who weren’t aware of it (68% vs. 30%). So I don’t think they are destined to follow in their parents’ footsteps,” says Mr. Young.

T. Rowe Price encourages parents to invest in their kids' futures by talking to them about money matters weekly. The survey found that parents who discuss financial topics with their kids at least once a week are significantly more likely to have kids who say they are smart about money (64% vs. 41%). Frequent topics parents have used to initiate money conversations have included:

•  Figuring out how much was saved by purchasing sale items (45%)

•  Discussing why they didn’t take a bigger vacation (34%)

To help parents have money conversations, the firm created MoneyConfidentKids.com, which provides free online games for kids; tips for parents that are focused on financial concepts such as goal setting, spending versus saving, inflation, asset allocation, and investment diversification; as well as lessons for educators.

BAD MONEY HABITS GET PASSED DOWN 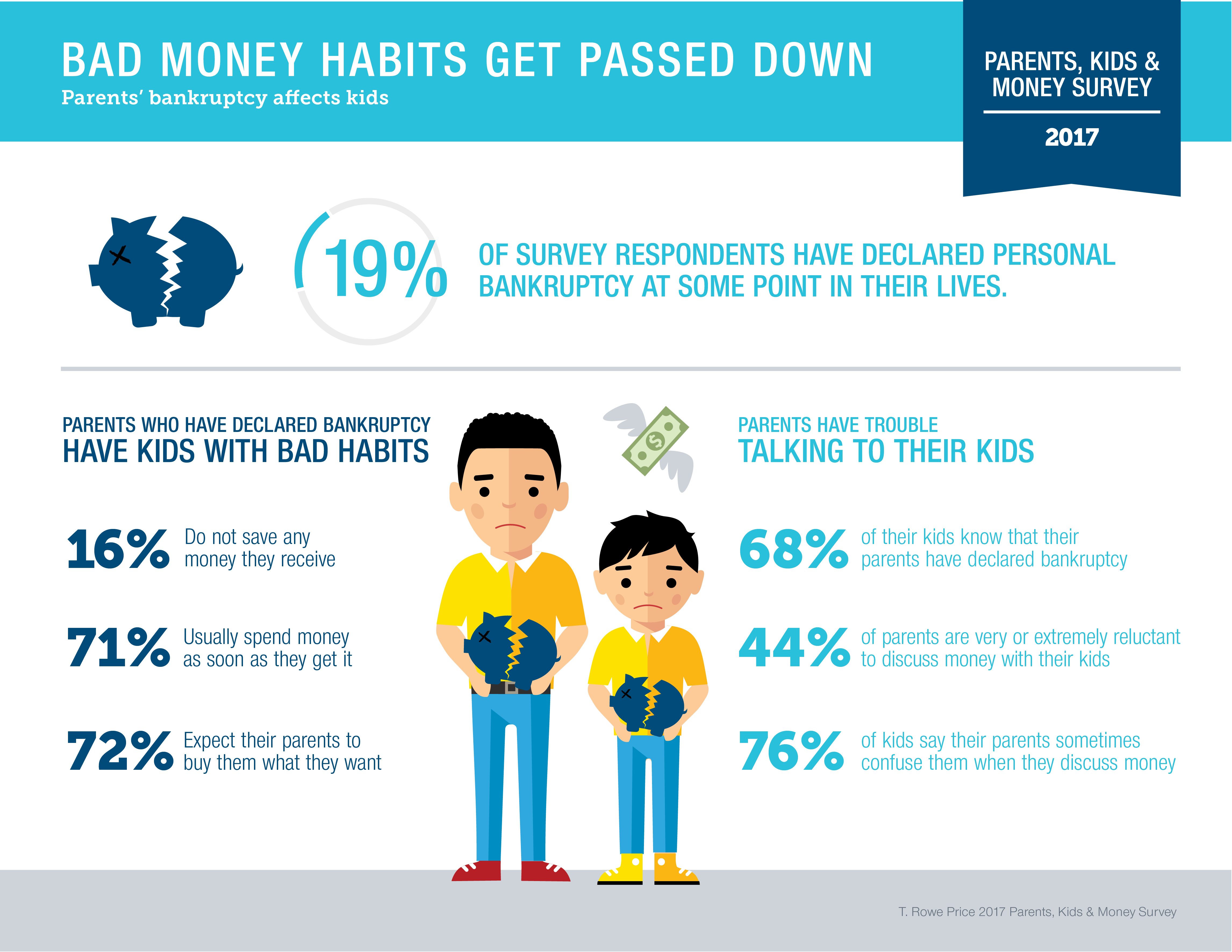 The ninth annual T. Rowe Price Parents, Kids & Money Survey, conducted by Research Now, aimed to understand the basic financial knowledge, attitudes, and behaviors of both parents of kids ages 8 to 14 and their kids ages 8 to 14. The survey was fielded from January 18, 2017, through January 26, 2017, with a sample size of 1,014 parents and 1,014 kids ages 8 to 14. The margin of error is +/- 3.1 percentage points. All statistical testing done among subgroups (e.g., boys versus girls) is conducted at the 95% confidence level. Reporting includes only findings that are statistically significant at this level.