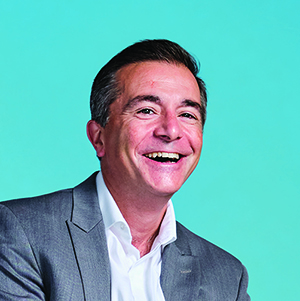 “At T. Rowe Price, diversity, equity, and inclusion, isn't a corporate platitude. I see it as more than that. We're taking action and having engaging dialogue around self-identification, gender identity, and orientation."

Eskandar Sadeghi didn't come to T. Rowe Price because of its inclusive culture. “It was entirely professionally motivated," the VP says. But after working at the firm for a couple of years, Eskandar, who goes by Essi and uses he/him or she/her pronouns depending on his gender presentation, felt safe enough to take a risk.

“I came to work one day presenting as a woman," Essi recalls. “I didn't know if what I was doing at the time was career suicide. To all intents and purposes, I had up until that point been viewed as a heterosexual white male. And I wasn't."

Essi's colleagues took the change in his appearance in stride, although there was some initial confusion. “It was an adjustment for a lot of people, and it caused some discomfort," he recalls. “There's a fear of the unknown, so it was an education process more than anything else." Now, although Essi presents as a man or a woman at different times, he's just another face at the office—and that's exactly how he likes it. “My gender identity is probably the least interesting aspect of me as an individual."

Essi started his current job in 2017 with over 17 years of experience in finance behind him. “I came to T. Rowe Price because I had an opportunity to do something different, to help build something from the ground up. My group was sort of an early startup, so I have been privileged to influence how that set of services and capabilities has grown. We have an opportunity to be quite transformative, and being a part of that journey has been exciting." Plus, the ex-Massachusettsan says, he was seduced by the prospect of no longer having to use a snowblower.

In his role as Vice President, Portfolio Construction Specialist, Essi works as a consultant to financial advisors. “I help them achieve great investment outcomes." Along with around 15 others—a group he calls the "portfolio construction family"—he supports U.S. distribution in selling the firm's products and services.

As for the training and education required for the role, Essi spotlights strong education. But personality is equally important. “I've got a degree in French and Russian," he laughs, “so I mean, anything goes, I guess!" Besides having a passion for capital markets, Essi suggests that intellectual curiosity, a willingness to learn, and an empathetic and adaptable disposition will serve prospective employees well.

“T. Rowe Price is a very relationship-oriented organization," he says. “You get by not just on your smarts, but your ability to navigate a close-knit organization. I think people often underrate the power of relationships."

When asked to describe the work culture, Essi doesn't hesitate. “It's collaborative. It's energizing," he says, adding that there's room for disagreement. “We feel comfortable enough as colleagues to call [it out] when something isn't right," he explains, “but it's done in the spirit of, 'Hey, we're trying to get to the best outcome here.'" That's where accountability comes in. “You can disagree, but you still have to commit."

These days, Essi sits on the T. Rowe Price Pride advisory board, which serves associates that identify as or who are allies to the LGBTQ+ community. “We ensure that they're able to bring their full selves to work," Essi says, noting, as an example, that the new T. Rowe Price campus will have gender-neutral bathrooms.

Essi welcomes that dialogue, particularly in the finance industry. “It's slowly beginning to change," he notes. “At T. Rowe Price, diversity, equity, and inclusion isn't a corporate platitude. I see it as more than that. We're taking action and having engaging dialogue around self-identification, gender identity, sex, and orientation."