No, We Are Not About to Return to 1970s-Style Inflation

Today’s central banks are willing and able to tackle the problem.

The world loves a label. The very low price increases during the decade that followed the global financial crisis (GFC) were termed, appropriately enough, “lowflation”—in other words, inflation that fell short of central banks’ targets but was positive and therefore wasn’t deflation. Now, amid the current surge in inflation, have we entered the decade of “highflation”—inflation that that is too high relative to central banks’ inflation mandate but too low to qualify as hyperinflation?

The current inflation surge rests on a few moving pieces but is mostly cyclical...

Actually, let’s cool it with the labels. The current inflation surge rests on a few moving pieces but is mostly cyclical—and central banks have both the ability and willingness to address the problem at hand. Contrary to some reports, we are not on the cusp of a return to the 1970s inflation inferno. Let me explain why. 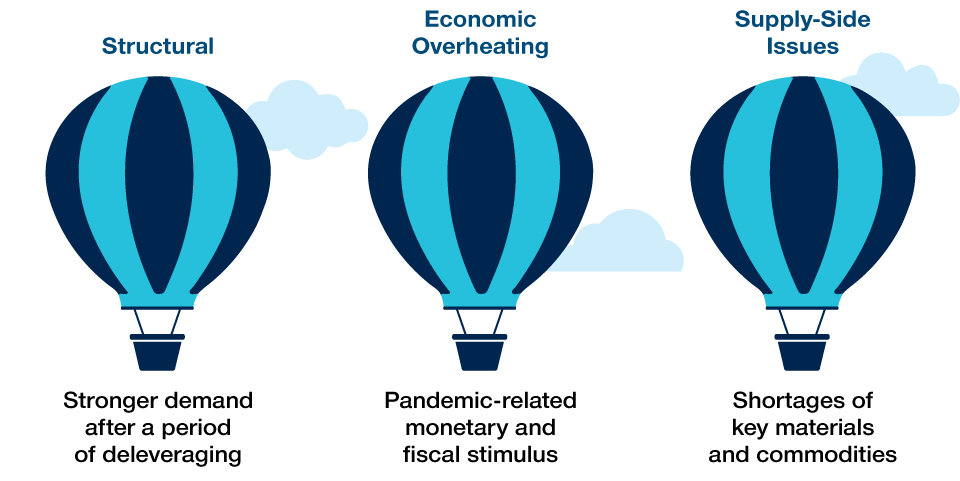 To understand the post‑COVID surge in inflation, we need to understand the post‑GFC period of lowflation that preceded it. The universally accepted explanation for the tepid post‑GFC recovery is secular stagnation, but, in my view, the true cause was deleveraging. As the U.S. financial system plunged into the abyss, the country’s financial sector and households had an epiphany: We have too much debt. Assisted by the rollout of stringent regulation, banks tightened lending standards and households spent the subsequent decade paying off debts.

This process wasn’t limited to the U.S. In Europe, the eurozone existential crisis kicked off a drive for both the public and the private sector to prioritize debt repayments, and, through the taper tantrum, most emerging markets were also roped into deleveraging. Consequently, the post‑GFC world was a world of deficient demand and idle resources—a very noninflationary world.

Three Reasons Why Inflation Has Returned

I believe there are three main factors behind the return of inflation. The first is structural. In 2019, prior to the coronavirus outbreak, I argued that the deleveraging process in the developed world had run its course and that we were about to enter a period of structurally stronger demand. I still believe this is the right paradigm and that it provides the structural underpinnings of a more inflationary world. This doesn’t mean we are entering a world of runaway inflation, though; rather, it means that central banks need to raise rates to keep demand in line with supply. In central bank parlance, the R‑star—the interest rate that keeps supply exactly in line with demand—has risen.

...the stimulus was just too large for the global economy to absorb.

The second factor behind the return of inflation is simple economic overheating. The crux of the issue here is the sheer size of the fiscal and monetary policy response administered during the COVID recession: Put simply, the stimulus was just too large for the global economy to absorb. The fact that we’ve now run out of labor tells its own story. Fortunately, cyclical demand management is another thing that central banks are well equipped for: tighten monetary policy and demand falls.

Third, there are some supply‑side issues that admittedly can’t be resolved by clever monetary policies. Most of these issues are well known, such as the shortage of semiconductors and the war in Ukraine, which have led to surges in vehicle and commodity prices, respectively. Although central banks are ill‑equipped to address supply‑side problems, we shouldn’t be too downbeat about this—first, because the issues are temporary and supply chains will eventually normalize; and second, because central banks know they shouldn’t use monetary policy to resolve temporary supply chain issues. Imagine if the Fed tightened monetary policy to bring the demand of autos to the current supply‑constrained output of 13mn units when the normal demand is 17mn units! It would likely plunge the economy into a very severe recession.

Independent Central Banks Mean We Are in a Different World

Inflation is a social choice...

Leaving aside these supply‑side issues, the good news is that central banks have the tools to control most of the causes of the inflation we see today. The question is whether they are willing to employ these tools. My answer is an unequivocal yes—and this is where modern central banking bears little resemblance to the central banks of the 1970s. Inflation is a social choice, and by choosing independent central banks with clear inflation objectives and accountability, we have made the choice to keep inflation controlled. Anyone in doubt as to whether central banks like the Fed will fall prey to political pressures should revisit the experience of the 2018 hiking cycle, when then‑President Donald Trump threatened to dismiss Federal Reserve Chair Jerome Powell in response to what he saw as an unwelcome tightening of monetary policy. The result? Powell kept his job, interest rates went up, and the Fed remained independent.

For participants in the financial markets, the bad news is that to bring inflation under control, central banks must tighten monetary policy to the point where growth slows to potential and, given our initial conditions, probably somewhat below potential. When growth slows sharply, particularly when it is accompanied by rising interest rates, financial market volatility usually ensues.

There’s no getting around this, I’m afraid. It’s the cost we incur to avoid the inflation infernos of the past, and, over the long term, it’s frankly a small price to pay.

This material is being furnished for general informational purposes only. The material does not constitute or undertake to give advice of any nature, including fiduciary investment advice, nor is it intended to serve as the primary basis for an investment decision. Prospective investors are recommended to seek independent legal, financial and tax advice before making any investment decision. T. Rowe Price group of companies including T. Rowe Price Associates, Inc. and/or its affiliates receive revenue from T. Rowe Price investment products and services. Past performance is not a reliable indicator of future performance. The value of an investment and any income from it can go down as well as up. Investors may get back less than the amount invested.

This material is only for investment professionals that are eligible to access the T. Rowe Price Asia Regional Institutional Website. Not for further distribution.