Deglobalisation in a Connected World

We are seeing a shift in the global economy that could shape the investment landscape for years to come.

Geopolitical tensions and supply disruptions have led some analysts to question whether an era of economic integration has ended, dimming prospects for productivity and growth. But that risk appears to have been exaggerated, the CIOs say.

“Globalisation isn’t dead. It may not even be dying,” Thomson argues. Economically, he notes, globalisation has been defined by the fivefold rise in international trade as a percentage of world gross domestic product since the early 1950s. While that ratio has stopped rising, it also isn’t falling, he notes.

But recent events have shown that globalisation is changing, Thomson adds. A number of economies have become dependent on critical imports from one specific part of the world, he says. Europe’s heavy reliance on Russia for natural gas, for example, put its energy security at risk when the war in Ukraine sent gas prices soaring.

Market forces can correct such imbalances if given time, Thomson says. This was demonstrated by the large declines seen in European gas prices in the second half of 2022 (Figure 5, left) as demand forecasts were slashed and new supply was rerouted to those markets.

Over the longer run, Thomson argues, energy development could drive a massive global surge in capital spending on the transition from fossil fuels to renewable energy sources. “The numbers that will be required are mind‑boggling,” he says. “I’ve seen estimates as high as USD 100 trillion.”

Capital expenditures on that scale, Thomson predicts, should generate investment opportunities on an equally grand scale in the technology, materials, and capital goods sectors, as well as in alternative energy producers and efficiency innovators.

Moving into 2023 and beyond, supply chains in some industries are likely to be reconfigured to limit future disruptions, McCormick argues. This will impose frictional costs. “I think it supports Justin’s argument that inflation will be stickier and volatility higher going forward,” he says. 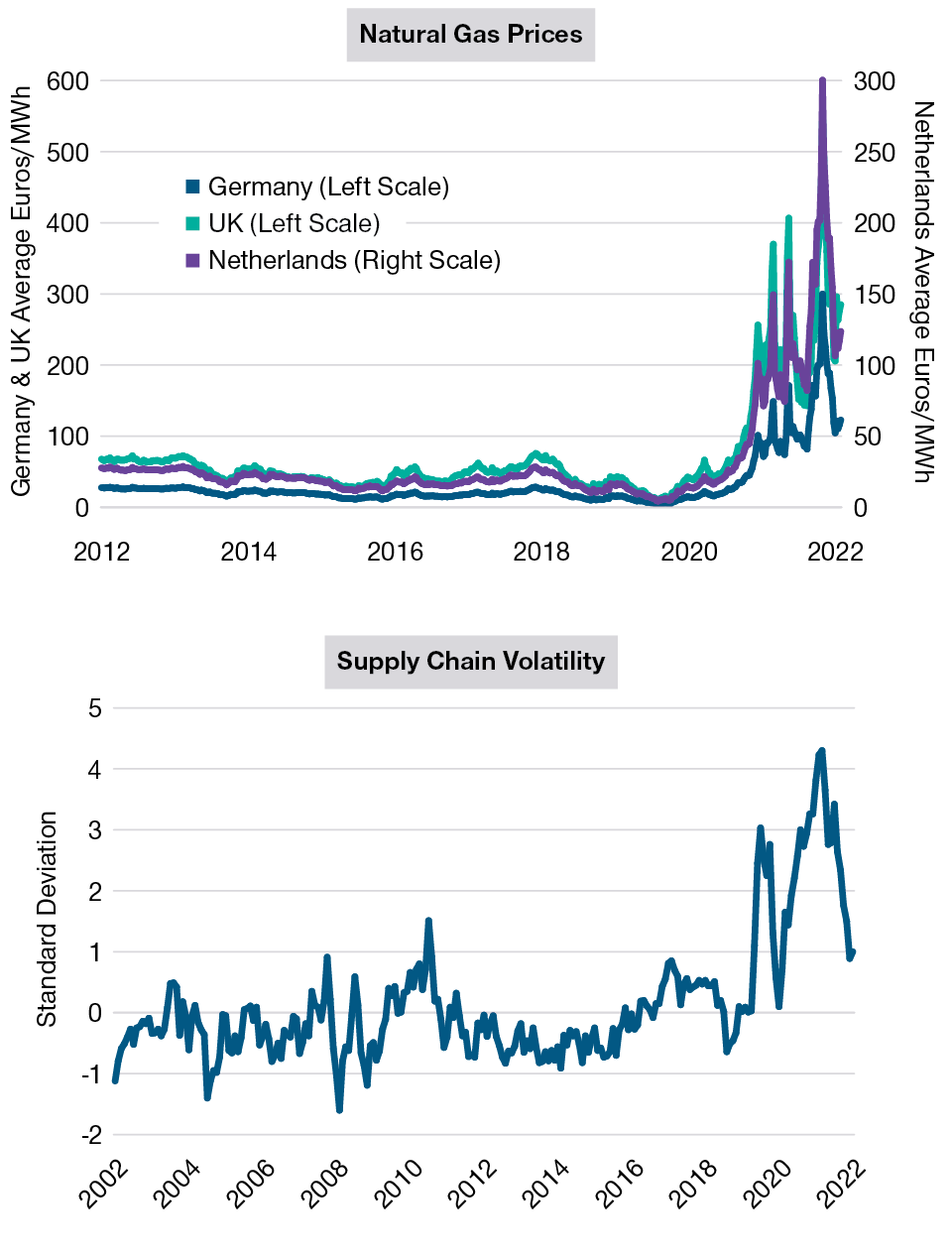 But adaption also will create potential opportunities for investors, McCormick and Thomson say. “The companies that can carve out important roles in the newer supply chains will be among the big winners,” McCormick predicts. “We think it could be the investing story of the next five years, if not the next decade.”

The companies that can carve out important roles in the newer supply chains will be among the big winners.

Skilled active management will be critical to take advantage of potential opportunities, McCormick adds. “Individual name selection will be important. The quality of management teams will become really important.”

A Contrarian Case for China

Investor anxiety about the economic and political future of China, the world’s second‑largest economy, weighed heavily on Chinese markets in 2022.

“Sentiment about China has never been worse than it is now,” Thomson says. But Thomson thinks the pessimism has been overdone. His arguments:

“I understand that these issues will continue to weigh on asset valuations and raise capital costs,” Thomson concludes. “But I think we need to stay objective here, keep an open mind, and watch the data points as they evolve.”