Why the Eurozone Will Not Mirror China’s Post-COVID Recovery

After an initial strong rebound, a period of eurosclerosis could loom

China’s success in quickly getting its economy back on track in the wake of the coronavirus will be studied closely by other regions hoping to achieve the same. The eurozone in particular, which faces the possibility of extended lockdowns as the European Union (EU) struggles with its vaccination program, will be hoping that China’s experience offers a template for its own path to recovery. However, while China’s experience contains some lessons for the EU, the economic and political differences between the two regions mean that, after a strong initial rebound, the EU’s recovery is likely to take longer and be more painful.

We would expect this to weigh on medium‑term eurozone growth, keeping yields on euro‑denominated debt lower than the debt of other major economies, particularly the U.S. It will also mean the renminbi is likely to strengthen against the euro over the medium term.

A Tale of Two Pandemic Responses

China’s approach differed from the eurozone’s in key respects 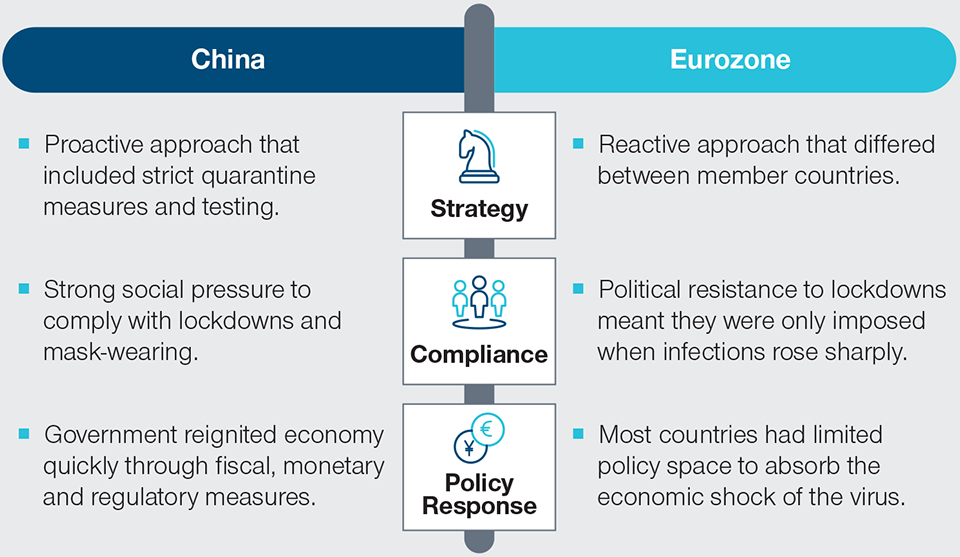 China’s Lesson in How to Respond to a Crisis

China responded relatively aggressively to contain the initial outbreak via a mix of strict quarantine policies, technology, and large‑scale testing. Social pressure to comply with measures such as mask‑wearing and lockdowns was high. As a result, while the outbreak initially spread to most cities in China and the authorities were grappling with significant scientific uncertainties given the novelty of the virus, they managed to successfully contain the spread and began reopening the country over February and April for the Hubei province. Although there have been a handful of scattered outbreaks since then, the authorities have been able to get them quickly under control with minimal disruption via mass testing and targeted quarantines.

China’s Economy Is Back on Track

(Fig. 1) It has assumed its pre‑COVID trajectory

As of February 28, 2021.
Past performance is not a reliable indicator of future performance.
SA = Seasonally Adjusted.
Sources: Caixin and IHS Markit/Haver Analytics.

As the public health situation came under control and movement restrictions were relaxed, the government reignited the economy through a mix of fiscal, monetary, and regulatory tools. A key feature of the government’s approach was its focus on getting the supply side of the economy back up and running while being relatively more measured in its support for demand.

On the fiscal side, the Chinese government expanded its augmented deficit (as measured by the International Monetary Fund) by 5% to 6% of gross domestic product (GDP). Fiscal measures focused on providing tax and social security contribution relief, boosting unemployment assistance—including expanded coverage to migrant workers—and enabling local governments to borrow more to spend on infrastructure. On the monetary side, the People’s Bank of China increased the pace of its liquidity injections by lowering repo and term lending rates and cutting bank reserve requirements.

Deep recessions often lead to vigorous recoveries, but economies typically do not return to the path they were on prior to the recession. China’s priority of getting the supply side back up and running enabled it to buck this trend: Although the initial shock from lockdowns was painful (GDP fell 7% year on year in the first quarter), the successful public health and economic policy response led to a relatively quick V‑shaped recovery, with growth returning in the second quarter and getting back to its pre‑COVID trend rate by the fourth quarter.

...the initial outperformance of its manufacturing sector helped China to return to the previous trend growth path...

As in a regular business cycle recovery, China’s rebound was initially driven by the manufacturing sector: China supplied key goods to the rest of the world as other countries faced disruptions, with a large jump in exports driven by medical equipment and electronics to aid working from home. On the other hand, those services requiring personal interaction (e.g., eating out) lagged and only began to recover toward the end of last year. Nevertheless, the initial outperformance of its manufacturing sector helped China to return to the previous trend growth path—almost as if the pandemic‑induced recession had never happened.

Why Europe Is Different

EU governments adopted a reactive and mostly national approach to containment in the first wave. Political resistance to imposing restrictions on personal liberty, combined with concerns over the cost of shutting down economies, meant that most countries only imposed significant restrictions in response to sharply rising case numbers. On the other hand, central and Eastern European (CEE) members of the EU that had preemptively imposed very tough personal restrictions avoided the first wave almost completely. This showed that, even in Europe, strong preemptive action supported by modern technology could have significantly reduced the initial outbreak of COVID‑19, and the associated economic losses.

Monetary and fiscal authorities have supported their economies to the best of their abilities, but most countries had little policy space left to absorb a shock of this magnitude. The European Central Bank’s pandemic emergency purchase programme certainly helped, but it only reduced the 10‑year bund yield by about 25bps, as it was at already very low levels compared with the more than 100bps reduction of U.S. Treasury yields as a result of the U.S. Federal Reserve’s asset purchase program. Given the limited impact that monetary policy could have in the eurozone, there was a greater reliance on fiscal policy—however, fiscal policies varied very widely across EU countries. Germany and France were able to be more generous in providing income replacement and direct fiscal stimulus than other eurozone countries, which resulted in a two‑speed recovery and exacerbated the growth differentials that were present in the currency union before the crisis.

A shining light has been the EU’s recovery fund, which will distribute EUR 750 billion in grants and loans to member states. Agreeing to a package of this size is a great breakthrough for an economic bloc known for strongly opposing views about risk‑sharing. However, the requirement for individual country ratification, a conflict about certain clauses, and a bureaucratic approval process mean that the biggest initial impact will likely be in late 2021 and in 2022—later than ideal to support a strong recovery.

Like China, the eurozone’s initial recovery from the coronavirus has been driven by the manufacturing sector, which has been supported by strong domestic and global demand. However, the EU services sector has been hit hard by two lockdowns, and several countries maintain restrictions on services activity. The services sector initially recovered rapidly after lockdowns were lifted, but it was hit hard again when social consumption was restricted during the autumn and winter. A broad‑based recovery needs to be supported by an improvement in the services sector as well.

After a strong initial rebound, we believe the transition back to normality in the EU will take time.

After a strong initial rebound, we believe the transition back to normality in the EU will take time. Even when the majority of the eurozone’s population is vaccinated and all coronavirus‑related restrictions are removed, it is unlikely that the economy will be able to return to the pre‑pandemic pattern of services consumption as quickly as in China. Furlough schemes and business support loans across the eurozone saved jobs and businesses, but the lengthy nature of the coronavirus crisis, the stop‑start nature of lockdowns, and changes in consumer preferences raise the risk that these jobs and businesses have become less viable. Rather than returning to business as usual, it is therefore plausible that a sizable number of firms will need to shut down and that employees will be forced to find new jobs once restrictions are lifted. These wide‑ranging government interventions have therefore delayed creative destruction from the middle of a recession to the beginning of the recovery. This process should inevitably lead to a difficult period of adjustment, which could result in a degree of “eurosclerosis1” and, hence, lower long‑run growth.

Eurozone economies will be able to follow China in lifting all COVID‑19 restrictions once mass vaccination begins to have an impact on the spread of COVID‑19. In anticipation of that event, it is expected that bond yields will initially sell off, and the euro will strengthen. However, the eventual onset of higher unemployment and greater firm bankruptcy in the services sector once fiscal support is withdrawn would weigh on economic growth after the initial rebound from lifting restrictions. In practice, this should mean that yields will rise less than in other major economies such as the U.S.

The current account surplus in both China and the eurozone is an important determinant of their respective exchange rates. Both economies will likely benefit from the global boom in demand for manufactured goods and, hence, maintain their current account surpluses. However, likely eurosclerosis in the eurozone’s services sector would weigh on the euro. This suggests that the renminbi could outperform the euro in the medium term, especially after the initial eurozone growth impulse from lifting restrictions fades.

But the exclusion of some areas brings opportunity for reform