Based on research originally published in the December 2020 Journal of Financial Planning.

Many people have two types of tax-advantaged options to save for retirement in an employer's plan or an individual retirement account (IRA): Roth and pretax contributions. With Roth, an investor gets no tax break upon contribution, but qualified distributions in retirement are tax-free. Pretax (also referred to as traditional or tax-deferred) contributions reduce taxable income, but distributions are taxed as ordinary income.

In general, the Roth/pretax decision should largely be based on a person’s expected tax rates: at the time of contribution versus distribution. For some people, this is relatively straightforward. A young person in a low tax bracket may expect higher tax rates in the future and choose Roth. A mid-career worker in a high tax bracket probably benefits more from pretax contributions.

The decision is more difficult for late-career workers (for example, those over age 50) who have already amassed significant pretax assets. Their marginal tax rate may be at (or near) its peak. However, their tax rates may fluctuate over the course of their retirement, making the analysis challenging. For example, when affluent people who don’t need all the money for retirement spending take required minimum distributions (RMDs), they may be pushed into a higher tax bracket.

In addition, someone with significant assets may expect to leave an inheritance, so the tax impact on beneficiaries should also be considered, if possible. The passage of the Setting Every Community Up for Retirement Enhancement (SECURE) Act of 2019, which generally requires full distribution of an inherited retirement account within 10 years, will likely result in higher taxes for many non-spouse beneficiaries of pretax assets.

We analyzed the Roth/pretax decision for late-career households at a variety of income and asset levels and considered several other factors. We found that asset levels are an important factor for late-career workers. Those who are solidly on track for retirement might benefit from switching to Roth contributions. Choosing Roth can result in lower taxes in retirement for the account holder, along with beneficiaries, which can outweigh higher working-year taxes in many cases. This can result in after-tax value to beneficiaries increasing by tens of thousands of dollars, without sacrificing spending in retirement. Pretax contributions are often preferable for people with lower assets and those with income at certain levels relative to tax bracket boundaries. As a result of the SECURE Act, Roth contributions have become more favorable at significantly lower asset levels than before the passage of the act.

What You Need to Know When Deciding Between Roth and Traditional

If you’re in a low tax bracket now and expect to be in a higher bracket later, you may want to consider a Roth.

Suppose a dual-earner married couple, both age 50, has a combined $225,000 of gross income. They plan to retire at 65 and expect a 30-year retirement. Based on several assumptions (see the Appendix in the full Download Article link), they spend $136,400 annually before retirement, which will drop by 5% to $129,500 in retirement. They will claim Social Security at 65 and receive $54,200 in annual benefits. Their beneficiaries are two children, earning the same income as their parents.

First, let’s assume they have accumulated 3.4 times their annual income, or $765,000, in tax-deferred accounts for retirement. We estimate that if they continue with pretax contributions, their beneficiaries end up with $88,000 after taxes. If they switched to Roth contributions at age 50, however, they would incur much more in income taxes before retirement, outweighing tax savings in retirement. Therefore, the beneficiaries only get $42,000: $46,000 less than if the couple had stuck with pretax contributions. In this example, pretax is preferable because the couple’s tax rate will be lower in retirement.

Now, assume the couple has accumulated 4.6 times their annual income, or $1,035,000 in tax-deferred accounts. Other assumptions remain the same. The additional $270,000 at the start results in more compounded growth and a much larger balance at the time of their death. While that doesn’t affect the couple’s tax situation much, if they stick with the pretax strategy it has a big impact on their two beneficiaries. Having to take full distribution of the account within 10 years generates significant extra taxable income and pushes the beneficiaries into a higher tax bracket. By switching to Roth contributions at age 50, the couple would leave their beneficiaries an after-tax inheritance of $915,000, a $35,000 improvement over the pretax strategy.

These examples illustrate the value of considering the full picture, including the impact on beneficiaries. Looking only at marginal tax rates before and during retirement would lead the couple to choose pretax contributions in both asset scenarios. That choice would be good for the couple in the scenario with more modest assets, but not for the one that is better positioned for retirement.

Choosing Roth can result in lower taxes in retirement for the account holder, along with beneficiaries, which can outweigh higher working-year taxes in many cases.

Choosing Roth can result in lower taxes in retirement for the account holder, along with beneficiaries, which can outweigh higher working-year taxes in many cases.

For a wide range of scenarios, we calculated break-even points—the asset level where either choice results in the same after-tax inheritance. People with assets above those levels (and whose situation fits the assumptions) should switch to Roth. Regarding the couple with $225,000 of preretirement income in the previous example, that break-even point is around four times their income in savings.

(Fig. 1) If your retirement assets relative to your income are above the line for your age, it is beneficial to switch to Roth contributions.

Looking at the graphs, you’ll notice a few things:

Keep in mind that these graphs assume there are two beneficiaries, both with the same income as the original household (during working years). Clearly, that does not describe all families. Therefore, we also evaluated scenarios for different numbers of beneficiaries and with different income levels. We found that:

Impact of the SECURE Act

The SECURE Act was enacted in December 2019. Unless an exception applies, the act generally requires non-spouse beneficiaries of retirement accounts to withdraw all of the funds from the accounts within 10 years.2 Previously, beneficiaries could stretch those distributions over their expected lifetime. This change can significantly affect retirement and estate planning decisions.

Therefore, we evaluated the Roth/pretax decision using both current rules and those in effect prior to the SECURE Act. For the pre-SECURE Act calculations, we assume beneficiaries spread distributions evenly over a 25-year period. In addition, the pre-SECURE Act case uses the previous RMD starting age of 70½, which was changed, for those turning 70½ in 2020 or later, to 72 by the act.

A comparison of the pre-SECURE Act and post-SECURE Act break-even asset levels is shown in Figure 2. The graph shows that those break-even points were significantly higher before the passage of the act. Under the baseline assumptions, those asset levels relative to income were higher by at least 4x income for dual-earner married couples, and at least 5x for single filers. Before the SECURE Act, the break-even points were affected much more by tax brackets during working years.

This finding highlights the importance of considering asset levels after 2019. Many people who were making the right decision to stick with pretax contributions before may benefit from changing course now. Put another way, before the SECURE Act, you probably had to be a truly prodigious saver to benefit from Roth contributions later in your career. Now, just being relatively on track for retirement could make Roth the better choice.

Before the SECURE Act, you probably had to be a truly prodigious saver to benefit from Roth contributions later in your career. Now, just being relatively on track for retirement could make Roth the better choice.

Before the SECURE Act, you probably had to be a truly prodigious saver to benefit from Roth contributions later in your career. Now, just being relatively on track for retirement could make Roth the better choice. 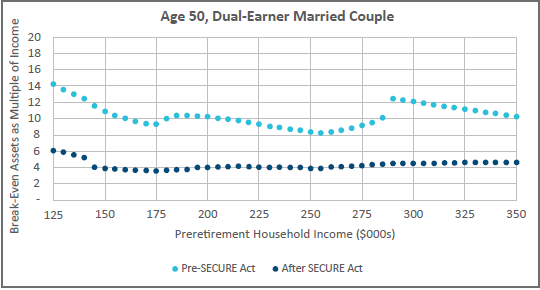 Impact of Other Factors

Factors other than income, asset levels, and beneficiary characteristics can also affect the decision. In general, situations that result in higher asset levels in retirement tend to favor the Roth strategy.

Other Factors That Affect the Decision, Relative to the Baseline Assumptions

For workers later in their careers who are relatively confident that they will not run out of money in retirement, switching to Roth contributions may improve outcomes for beneficiaries without sacrificing spending in retirement. This change in strategy is appropriate for people in many more situations following the passage of the SECURE Act.

This analysis also has ramifications for younger workers. This analysis finds that late-career workers can benefit from switching to Roth even if their tax bracket isn’t particularly low. But those workers would have been even better positioned if they had used Roth contributions earlier at lower tax rates. That was not necessarily feasible decades ago, but now employers increasingly offer Roth 401(k) contributions. The takeaway is that young workers with the ability to save aggressively should strongly consider Roth contributions.

Although this analysis does not cover every situation, the break-even asset levels can be a starting point to evaluate your decision. It also demonstrates the value of financial conversations with your adult children. As you approach retirement, evaluating your situation more closely—on your own or with a financial planner—can help you make informed choices that benefit you and the next generation.

1Break-even points are only shown at income levels where the assumed savings rate is feasible under statutory deferral limits. Points are not shown for age 60 above an income of $285,000 because those points would result in negative ending balances under one or both strategies. While in a few cases the analysis identified multiple break-even points, only the lowest ones are shown.
2Exceptions apply, such as beneficiaries less than 10 years younger than the owner, minor children of the original owner, and disabled or chronically ill beneficiaries.

This material has been prepared for general and educational purposes only. This material does not provide recommendations concerning investments, investment strategies, or account types. It is not individualized to the needs of any specific investor and is not intended to suggest that any particular investment action is appropriate for you, nor is it intended to serve as the primary basis for investment decision-making. Any tax-related discussion contained in this material, including any attachments/links, is not intended or written to be used, and cannot be used, for the purpose of (i) avoiding any tax penalties or (ii) promoting, marketing, or recommending to any other party any transaction or matter addressed herein. Please consult your independent legal counsel and/or tax professional regarding any legal or tax issues raised in this material.

All investments involve risk, including possible loss of principal.

What You Need to Know When Deciding Between Roth and Traditional

If you’re in a low tax bracket now and expect to be in a higher bracket later, you may want to consider a Roth.