Towards the end of each year, mutual fund shareholders—equity fund shareholders in particular—face potential tax consequences. That’s because mutual funds must distribute any dividends and net realized capital gains earned on their holdings over the prior 12 months. For investors with taxable accounts, these distributions are taxable income, even if the money is reinvested in additional fund shares and they have not sold any shares.

Investors in tax-advantaged accounts such as individual retirement arrangements (IRAs), 401(k) accounts, and other tax-deferred savings plans do not pay taxes on dividends and capital gain distributions in the year they are received, as long as the money remains in the account and no withdrawals are made.

Keep in mind that funds may hold securities for several years, and any appreciation in the value of the shares during that time is not distributed as taxable capital gains until after they are sold. Fund managers may sell holdings—and thereby realize gains—for a variety of reasons, such as concerns about earnings growth, or if a stock has become fully valued in the manager’s opinion, or to reinvest the proceeds in a more attractive opportunity. Corporate mergers and acquisitions also may result in a taxable sale of shares in the company being acquired.

Taxable gains in a fund potentially could be offset by realized losses on other sales.

When dividend and net capital gain distributions are made, the net asset value (NAV) per share of the fund drops by the amount distributed. Importantly, the shareholder has not lost money because of this decline in the NAV. They either have taken the distribution in cash or reinvested the money in additional fund shares purchased at the lower adjusted NAV.

Fund shareholders who reinvest their distributions in fund shares—and most fund investors do—could benefit if the acquired shares rise in value.

While no investor enjoys paying taxes on income that they have not actually received in cash, reinvested distributions are considered part of the investor’s cost basis. This could significantly reduce the taxable capital gains realized when fund shares ultimately are sold by the investor, especially if the fund has been held for a long time.

For example, consider the hypothetical scenario illustrated below: Suppose you bought $10,000 of an equity mutual fund on January 1, 2014. Over the next five years, the fund paid distributions totaling $2,000, which you reinvested in the fund account and included on your tax returns. When you sold all your shares on June 30, 2019, you received $26,500—$16,500 above the $10,000 you originally invested. But you wouldn’t pay taxes on the whole $16,500 since you had already been taxed on the $2,000 of distributions over the prior five years. You would only include $14,500 as your capital gain on your 2019 tax return.

Over a period of five years 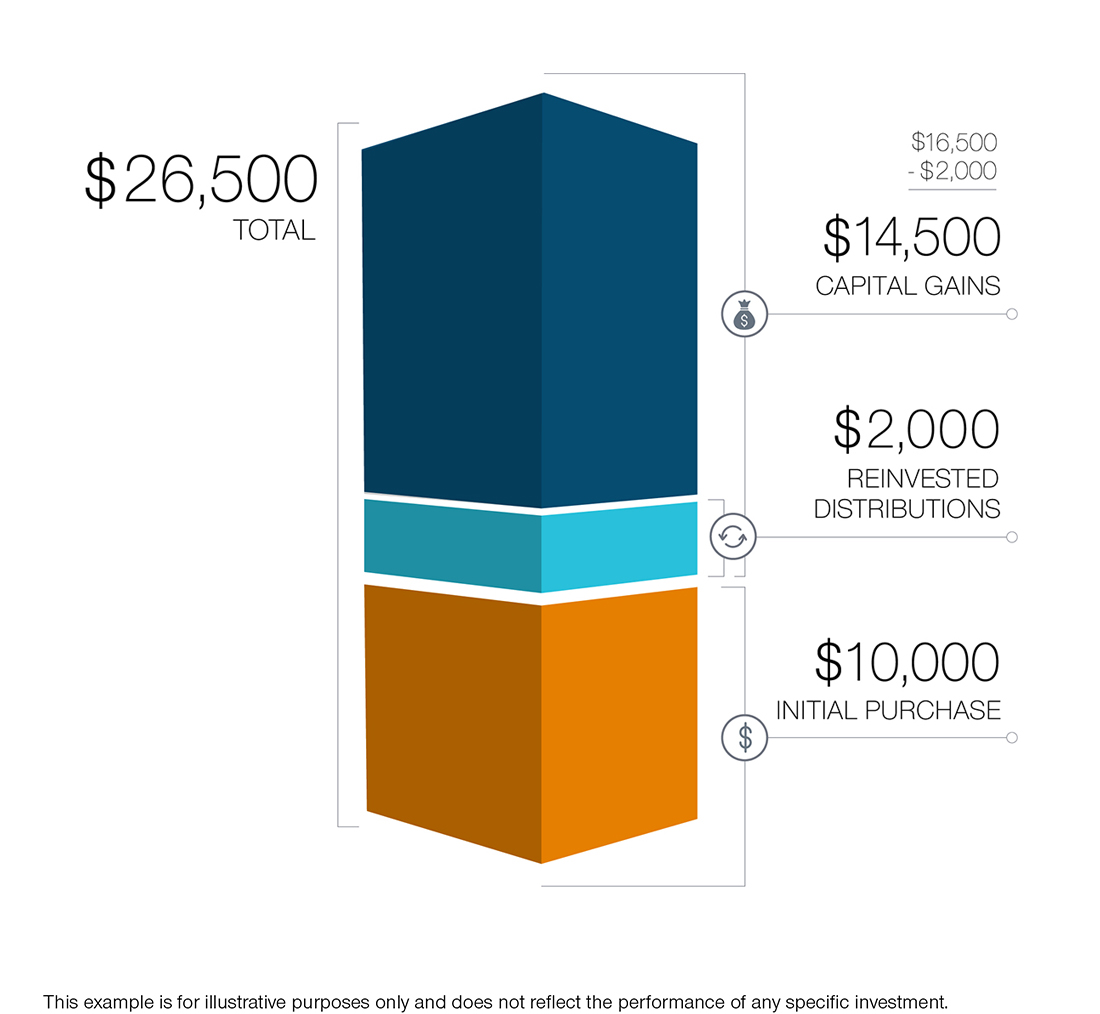 Investors in taxable accounts planning new or additional investments in a fund may decide to wait until after a dividend or capital gain distribution is made in order to buy fund shares at the lower NAV and avoid having to pay tax on the distribution. Depending on how long the investor has to wait, however, this strategy could result in missing out on appreciation of the fund shares in the interim. The longer the investor has to delay their purchase, the greater this risk becomes.

Some investors also may consider selling fund shares before a distribution to avoid the tax due. If the investor had gains on the shares at the time of the sale, the realized gains would be taxable in the year the shares were sold. And if the shares sold were held for 12 months or less, that gain would be taxed at ordinary income rates. Ultimately, this strategy may or may not reduce taxes owed for the year.

On the other hand, an investor might be able to sell fund shares at a loss to avoid a distribution. However, if the investor then repurchases shares in the same fund within 30 days, the “wash sale rule” prevents them from claiming a capital loss for that tax year. Instead, the loss is deferred and added to the investor’s cost basis for the new shares acquired. This may reduce taxable gains, or increase tax losses, on future sales. The investor’s holding period for the shares sold also is tacked on to the holding period for the new shares acquired.

Investors concerned about tax exposure might want to consider investing in tax-efficient equity funds. Such funds typically are managed with an eye toward limiting capital gain distributions when possible by keeping holdings turnover low and harvesting losses to offset realized gains.

While tax considerations may play an important role in investment decisions, T. Rowe Price financial planners encourage investors to focus primarily on their long-term financial goals. Making investment decisions based solely on tax considerations could result in expensive mistakes that reduce returns overall—making it harder, not easier, for investors to achieve their objectives.

Call 1-800-225-5132 to request a prospectus or summary prospectus; each includes investment objectives, risks, fees, expenses and other information that you should read and consider carefully before investing.

This material has been prepared by T. Rowe Price for general and educational purposes only. This material does not provide fiduciary recommendations concerning investments, nor is it intended to serve as the primary basis for investment decision-making. T. Rowe Price, its affiliates, and its associates do not provide legal or tax advice. Any tax-related discussion contained in this material, including any attachments/links, is not intended or written to be used, and cannot be used, for the purpose of (i) avoiding any tax penalties or (ii) promoting, marketing, or recommending to any other party any transaction or matter addressed herein. Please consult your independent legal counsel and/or professional tax advisor regarding any legal or tax issues raised in this material. 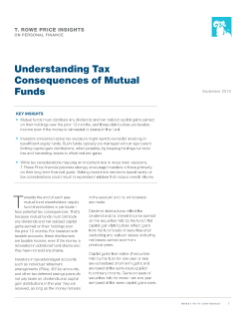