Spotlight on Bangladesh, Myanmar, and Vietnam

May 6, 2019
A recent research trip took us on a tour of Bangladesh, Myanmar, and Vietnam, where we are finding attractive investment opportunities across a range of companies.

South Asian markets suffered amid a broader global sell‑off in emerging markets and their currencies due to concerns about the U.S. Federal Reserve’s monetary policy tightening cycle in the final quarter of 2018. However, economies in the region remain underpinned by some of the fastest growth rates in gross domestic product (GDP) in the world, while favorable population dynamics are providing an added tailwind. A recent research trip took us on a tour of Bangladesh, Myanmar, and Vietnam, where we are finding attractive investment opportunities across a range of companies. Veering off the beaten track, many of these companies are uncovered by mainstream investors. 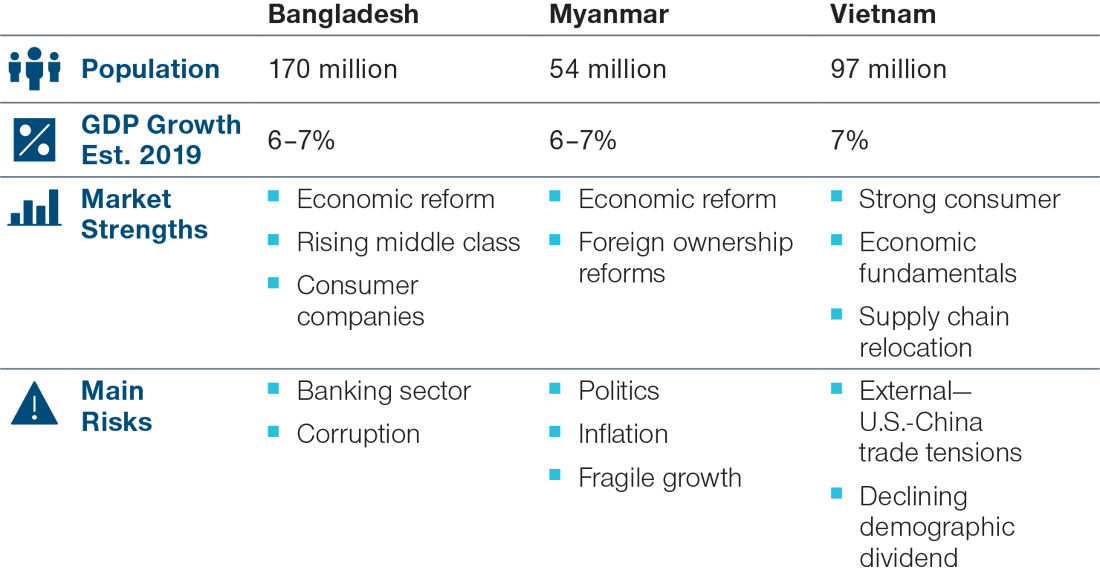 Veering off the beaten track, many of these companies are uncovered by mainstream investors.

GDP Growth From A Low Base, But Risks Remain

Bangladesh is a country undergoing monumental change. Over the past decade, GDP per capita nearly doubled to over USD 1,500, adult literacy rates rose from 47% to 73%, foreign direct investment (FDI) trebled, power generation tripled (now reaching 90% of the population), and exports compounded in the high teens. Going forward, the government is investing to sustain economic growth, and public accounts are reasonably managed, according to the International Monetary Fund.

There are two key risks threatening the Bangladeshi investment case. First, the currency appears overvalued, which suggests that it is fragile to shocks. However, central bank reserves of over USD 30 billion have been stable and amount to seven months of import cover, while the trade balance is back in surplus. Anecdotally, the currency did not feel expensive on the ground, and minimum wages remain among the lowest in the world (USD 95 per month versus USD 153 in Vietnam and USD 195 in Indonesia).

The second risk pertains to the weak asset quality in the banking system. Industry nonperforming loans are officially 12%; however, it is widely recognized that the real number is likely to be in the mid‑20s. A bailout and subsequent consolidation are desperately needed with over 61 local banks. However, the government can afford to bail out the ailing banks, considering the low public debt level of less than 35% to GDP.

Against this mixed backdrop, we have identified two key drivers of change that could prove monumental for the country’s growth prospects: economic reforms and population dynamics.

Economic reforms have the potential to help Bangladesh evolve its export market as low-cost manufacturing moves from China to countries such as Bangladesh, Cambodia, Myanmar, and Vietnam. In addition to infrastructure projects in ports, metro, roads, and power, the government is creating 100 special economic zones designed to ensure land rights, access to utilities, and easy dispute resolution. Bangladesh is starting from a low base, with exports composing only 15% of GDP (versus an estimated 102% in Vietnam, 61% in Cambodia, and 19% in India) and 83% of exports made up of garments.

Bangladesh has a burgeoning middle class of nearly 19 million people, which is growing by more than 10% annually, according to Boston Consulting Group. This has profound implications on the growth prospects of most consumer companies. For example, the packaged food market has trebled in size over the past decade to nearly USD 4 billion (Euromonitor). GDP per capita has nearly doubled in the past decade, while adult literacy rates have improved dramatically.

The companies that we met with are among potential beneficiaries of reforms and population growth dynamics, as they come to drive growth in domestic consumption.

On our recent trip, we met with the management of a leading health and beauty products company. The new CEO has sought to diversify the product range away from basic hair oil, which has resulted in accelerating sales growth, while profit margins have remained broadly stable. We have confidence in the management team and know the Indian parent company well.

We also met with the management of a telecommunications company, which operates in one of the most attractive markets globally; SIM penetration is less that 60%, while data penetration is low in terms of user numbers, both of which bode well for expansion. The company also has a low subscriber churn rate but faces regulatory risks, which we factor into our view of the stock.

Our final visit was with the management of a pharmaceuticals producer. The company has a leading return on capital invested, while its target market is expected to grow in the mid‑teens on account of favorable demographics and consumers’ growing purchasing power.

Adding 8 million people to the middle class every five years

Bangladesh has a burgeoning middle class of nearly 19 million people, which is growing by more than 10% annually...

Myanmar is one of Southeast Asia’s fastest‑growing economies, expanding at an annual rate of 6%–7%, driven largely by domestic consumption and an influx of FDI. Exports, while modest in comparison with regional peers, were up from 16.8% of GDP in 2017 to 20% in 2018, led by growth in garment manufacturing.

In the latter half of 2018, the domestic currency—the kyat—suffered double‑digit losses against the U.S. dollar, trending downward with emerging market peers amid concerns about the Federal Reserve’s monetary policy tightening cycle. Inflation rose to its highest level in two years as food prices spiked as a result of severe flooding during a particularly fierce monsoon season.

However, economic reform momentum is finally beginning to pick up after a disappointing first four years in office for Aung San Suu Kyi’s National League for Democracy (NLD). In January, the rate cap for unsecured lending was increased to 16%, and the insurance sector was opened to foreign competition. Foreign investors can now own up to 35% of domestic private businesses (including banks) in Myanmar, and foreign banks can now lend to domestic firms. The Myanmar Investment Promotion Plan was launched in October, ambitiously aiming to attract over USD 200 billion in FDI over the next 20 years.

To some degree, levels of FDI are expected to be affected by political developments, given the persecution of the ethnic minority Rohingya people and a resultant refugee crisis. Net FDI flows actually increased year on year to USD 4 billion in the 2018 fiscal year, but commitments reflecting current investment decisions were down 14% year on year. We anticipate the impact to be fairly contained, given continued investment from Singaporean, Thai, and Chinese firms, which account for around 70% of fixed capital investment from overseas.

Poor credit quality in the banking sector is also a risk for the broader economy. While no reliable data exist, estimates for nonperforming loans fall in the 30–40% range.

We met with the management of a leading investment company that engages in property development and construction services. The stock is a beneficiary of improving domestic consumption trends, with the healthy pace of GDP growth providing a tailwind. In our view, investors are underestimating the firm’s progress in its turnaround strategy, which has been focused on operational execution in existing businesses rather than idea generation for new revenue streams. We anticipate that the firm’s shift into affordable housing will catalyze rapid volume growth, with other developers yet to expand into the segment. Conditions of housing shortage coupled with urban population growth are providing a favorable backdrop.

Foreign investors can now own up to 35% of domestic private businesses (including banks) in Myanmar, and foreign banks can now lend to domestic firms.

The Vietnamese economy is on firm footing, without major imbalances. Vietnam’s GDP in 2019 is expected to be one of the highest in the world at close to 7%, with expansion fundamentally consumer‑driven, underpinned by urbanization dynamics and wage growth. Positive net exports will add to GDP and achieve a current account surplus again this year. Furthermore, the central bank has been monitoring the economy closely for any inflationary pressures and, so far, has been very effective in maintaining inflation below the 4% target, learning the lessons from past crises.

The main risk for now is an external shock, such as a sharp escalation in U.S.‑China trade tensions. From a short‑term perspective, there could be a notable impact on aggregate demand. Medium term to long term, however, supply chain movement could be very positive for the country.

We met with the management teams of several banks in Vietnam and are expecting a good year with significant earnings growth potential. Three trends are set to provide a tailwind: a continuing shift toward higher yielding retail credit; positive asset quality trends, with many banks fully provisioned, and overall support for further resolutions bringing system wide non-performing loans lower; and increased profitability due to broader product offering. The banks’ low capitalization levels ahead of Basel II implementation next year remains a key concern, however.

On the consumer front, we had a number of meetings, including with the management team of a dairy products company. While discretionary spending has held up well this year, supported by strong wage growth, the company faces a structural headwind in the form of a declining birth rate—given that the cohort of 0–12‑year‑olds is the largest consumer of dairy products. We prefer other consumer‑related companies.

7%
Vietnam’s GDP in 2019 is expected to be one of the highest in the world, with expansion fundamentally consumer driven, underpinned by urbanization dynamics and wage growth.

Our recent meetings with companies in South Asia helped us refine our levels of conviction in the investment opportunities on offer. This entails taking into account both company‑specific factors as well as the broader economic and political trends that exert an impact on valuations.

A common underpinning for markets across Bangladesh, Myanmar, and Vietnam is favorable population dynamics, in particular a growing middle class seeing wage growth trending upward. As these economies and markets develop, and if economic growth continues to outpace global averages as we anticipate, the opportunities for the long‑term investor to benefit are ample.

The development of the economies of Bangladesh, Myanmar, and Vietnam is closely linked to a burgeoning middle class and growing export orientation driving growth. We will continue to monitor these trends and assess their impact on the earnings growth prospects of the companies that we are invested in or that we might be looking to add exposure to. The potential in the region appears unrivaled and offers ample opportunity to generate profits for active managers with a good grasp of the risks associated with investing in developing markets.

he views contained herein are those of the authors as of May 2019 and are subject to change without notice; these views may differ from those of other T. Rowe Price associates. 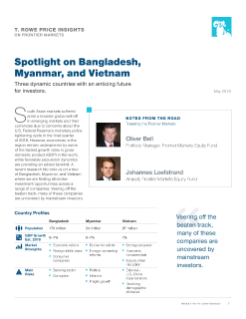