The UK’s Autumn Statement provided reassurance to markets following the turmoil of September’s mini-budget, but painted a bleak picture of the economy. A difficult period ahead looms as the government juggles with the competing goals of restoring growth, controlling inflation and trying to avoid exacerbating the cost-of-living crisis.

Rt Hon Jeremy Hunt MP had to walk a tightrope, with investor demand on one side and voter concerns on the other. The former were looking for a coherent plan that included a strong commitment to fiscal rules on debt and borrowing; the latter (who will go to the polls in a general election no later than January 2025) sought reassurance that the Conservative Party would stick to its manifesto pledges to not raise headline tax rates and keep the pensions ‘triple lock’.

Chancellor Hunt largely succeeded in balancing the demands of these two groups. The plan he presented was coherent and did not shy away from acknowledging the £55 billion fiscal black hole facing the UK Treasury. At the same time, by freezing tax thresholds and keeping headline rates largely unchanged, Hunt ensured that the more painful measures will be postponed until 2025 and later – after the next election.

The decision to largely backload the impact of fiscal consolidation is a smart macroeconomic strategy, especially given the current stage of the business cycle. The UK faces a sizeable recession as real disposable incomes fall sharply due higher energy prices and high inflation. Backloading will ensure that fiscal consolidation does not exacerbate the recession unnecessarily. The Bank of England (BoE) will now be able to continue raising interest rates to get inflation under control, and once this is achieved it will be able to cut rates to support the recovery. A stronger recovery, lower inflation and flatter yield curve will make fiscal consolidation easier and possibly less painful.

Market reaction to Chancellor Hunt’s announcements was largely muted. On the day of the statement, the FTSE 100 index ended largely flat and gilt yields were slightly up, but not dramatically so. The UK Debt Management Office announced that it will sell £169.5 billion of bonds this year, down from a previous estimate of £193.9 billion in September after the mini-budget (although this is still well up on April, when it was £131.5 billion).

The economic outlook presented in the statement was sobering, however. Based on Office for Budget Responsibility (OBR) forecasts, Chancellor Hunt announced that the UK is already in recession, with growth expected to be 4.2% this year before falling to minus 1.4% next year. The OBR predicts growth will then rise by 1.3%, 2.6% and 2.7% over the subsequent three years. The OBR’s forecasts are based on the assumption of a potential real GDP growth rate of 1.75% over the forecast horizon.

Given the supply side challenges facing the UK economy, achieving this rate of potential growth will likely be challenging. Like in many European economies, the UK’s capital stock will need to adjust to higher energy prices over the coming years, which is one drag on potential growth. Another likely drag on the UK’s growth – and one that it does not share with other countries – is its persistent and broad-based labour shortage. This UK-specific factor is underestimated, in our view.

At the heart of the problem is the fact that the UK is the only industrialised economy where the labour force participation rate has contracted significantly since the pandemic. The number of people who have become economically inactive since 2019 citing long-term illness or mental health problems has risen by 630,000, according to the Office for National Statistics (ONS). BoE governor Andrew Bailey told MPs that the UK is “the only OECD country showing this pattern of labour force shock”. An analysis by Bailey’s BoE colleague, Prof. Jonathan Haskel, has shown that in most OECD countries more people entered the job market between 2019 and 2022. 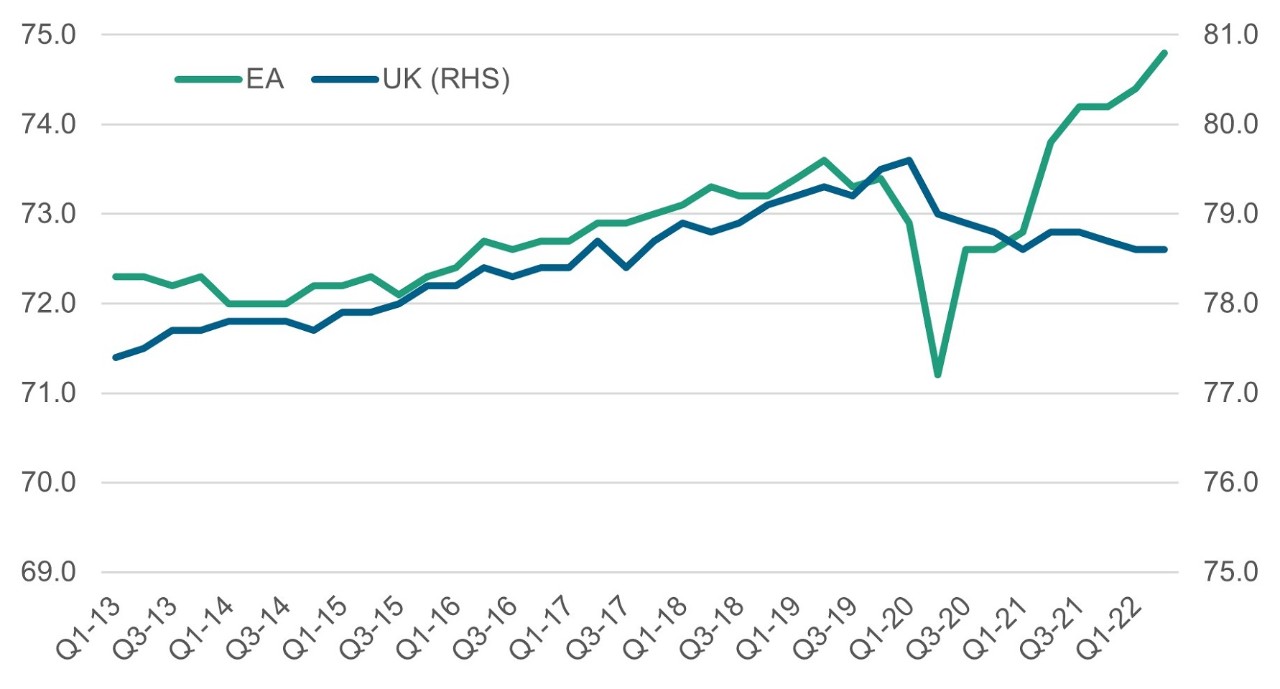 Meanwhile, job vacancies are high. In the three months to September, there were 1.5 vacancies per unemployed person in the UK. Although the shortage is particularly acute in high-skill services sectors, it is broad-based across the economy. While the reasons why so many people are leaving the workforce when vacancies are so high are still a matter of debate (potential factors include early retirements, longer hospital waiting times and long Covid), the resulting wage dynamics will require the BoE to keep labour demand in check, likely resulting in higher interest rates and lower growth in the medium term.

Fig. 2: Number of vacancies per unemployed person by sector, UK As at 30 September 2022 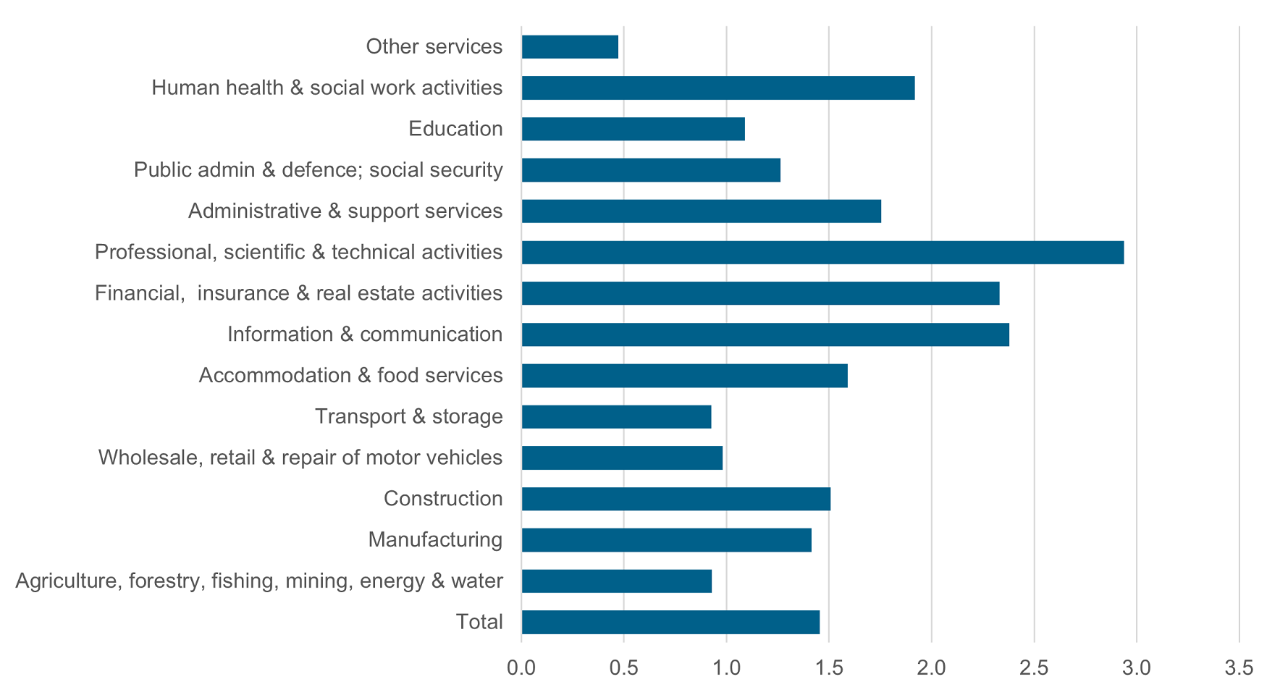 There are two ways this problem can be solved. The first – and economically most efficient – solution will be to find a way of encouraging UK residents who have left the workforce to return. This will require structural change in the labour market, support and reform of the NHS and helping workers to gain new skills. The Chancellor announced a review of the issues holding people back from participating in the jobs market, to be published early next year, alongside new funds to tackle fraudulent benefit claims.

The budget continues to support the NHS. Chancellor Hunt announced a long-term NHS work force plan based on independent forecasts and the government is exploring a number of areas for NHS reform. The commitment to levelling up in terms of infrastructure development can also support greater labour market participation. Despite these efforts, it is hard to know whether these measures will be sufficient to have a large impact on labour supply in the short term. Past evidence has also shown that the effects of such structural reform may take a long time to show in growth data.

The second way for the UK to boost its workforce would be to issue more visas to foreign nationals to fill vacancies in key areas. The government is already exploring this solution for highly skilled workers in the most affected sectors such as IT. The recent experience with work permits for Ukrainian refugees has shown that more broad-based schemes can be successful, but such an approach would likely carry a significant administrative burden if adopted on a larger scale. There are also temporary political constraints: voters are likely to feel uncomfortable with large scale economic migration in the current economic climate. While implementing either path will therefore be difficult, the best approach will be to address the root causes of the labour shortage.

Structural supply-side reform is always challenging, particularly in the labour market and when times are tough. Nevertheless, this is the best way for the UK to achieve the sustainable potential growth embedded in the OBR’s forecasts and therefore medium-term fiscal sustainability. So far, Chancellor Hunt’s statement achieved his primary objective of reassuring investors and voters. But the hardest part of following through with supply side reform to address UK labour market shortages is still ahead. Until these reforms are completed, uncertainty over the UK’s medium-term growth outlook will remain.

China—The Interplay of Policy, Growth, and Geopolitics
Next Article

Tomasz Wieladek is the chief European economist in the Fixed Income Division in London. Tomasz is a vice president of T. Rowe Price Group, Inc.

After Goldilocks, Which Bear (Market) Will Prevail?

After Goldilocks, Which Bear (Market) Will Prevail?

After Goldilocks, Which Bear (Market) Will...

A clearer picture of the U.S. market outlook should emerge over the coming weeks