Aggressive rate hikes are slowing economic growth. But a deep downturn across the globe is not inevitable

The outlook for inflation and interest rates (Figure 2) will remain critical in 2023 as investors try to estimate where ates will peak and when the Fed might “pivot” toward monetary easing.

U.S. consumer inflation slowed in late 2022, thanks to a partial unwinding of the oil and other commodity price spikes seen earlier in the year. But inflation in the services sectors remained “sticky” as tight labor markets continued to push wage costs up at a relatively rapid clip.

“In the U.S., inflation has likely peaked,” Thomson predicts. “But the key question is where it lands. And I think it’s unlikely to be at the Fed’s presumed target of 2%. We know that inflationary shocks like this one can take years, not months, to work through.”

Sticky inflation creates considerable uncertainty about where interest rates will peak in this Fed tightening cycle.

With rates now in “restrictive” territory, McCormick says, Fed policymakers, may slow the pace of hikes. But futures markets suggest investors still expect the Fed to lift the target for its key policy tool, the federal funds rate, to around 5%.

Fed policymakers hope to be able to pause at some point to allow the impact of previous rate hikes to work their way through the economy, McCormick adds. Whether a pause turns into a pivot or is followed by additional hikes, he says, will depend on the balance between inflation and recession risks. But a quick turn to easing in 2023 appears unlikely.

This means investors waiting for a clear sign that Fed policymakers are ready to cut rates could be left standing on the sidelines longer than they currently expect. “A lot of investors are looking for a Fed pivot,” Page says. “But I think it’s unlikely as long as U.S. employment numbers remain strong.”

The inflation picture is more mixed in other major developed markets, as is the expected path of monetary policy. 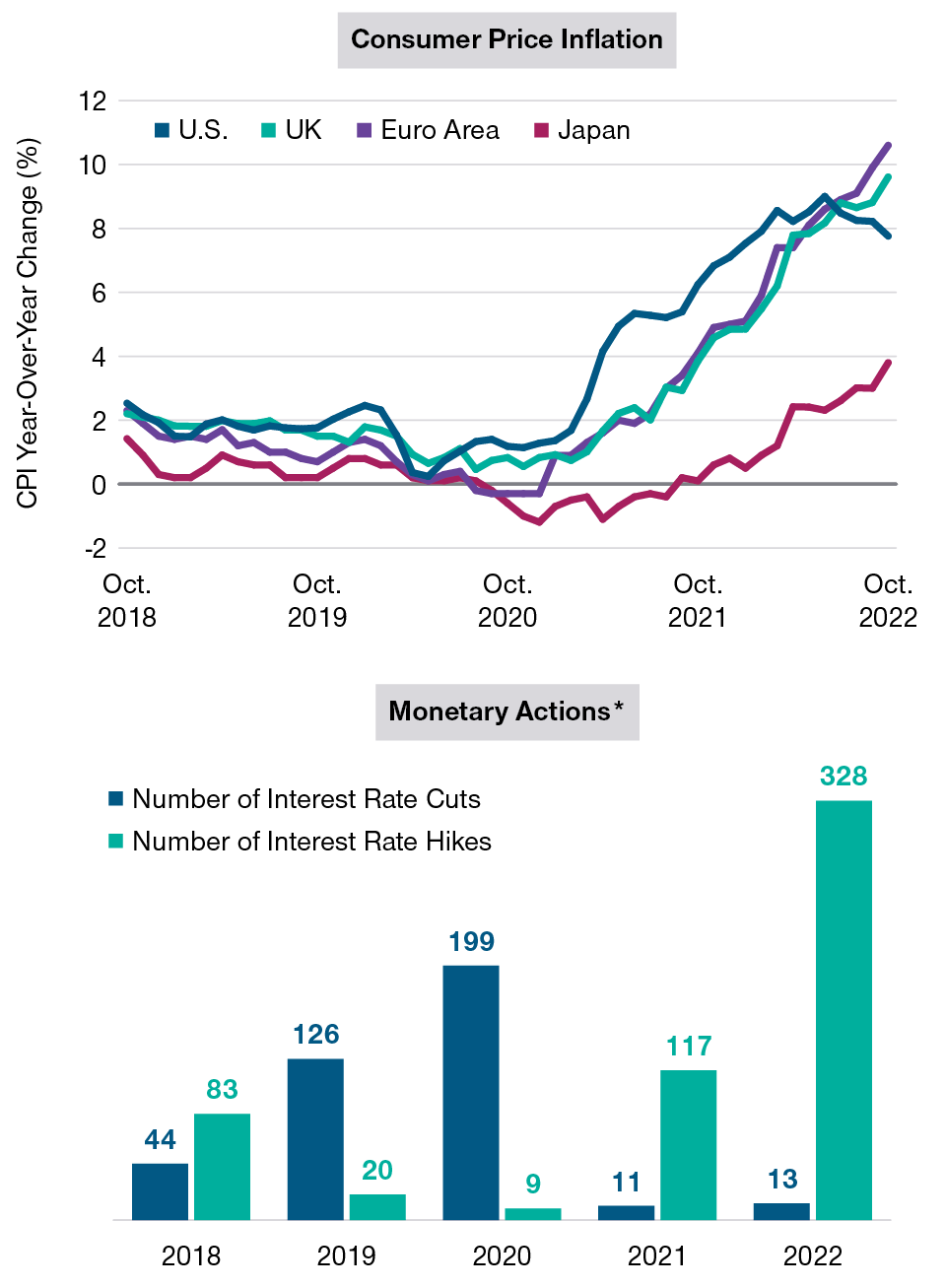 Over the longer term, Thomson argues, a number of structural factors are likely to tilt the U.S. and other major developed economies toward higher inflation. These include:

Over the longer term, a number of structural factors are likely to tilt the U.S. and the other major developed economies toward higher inflation.

U.S. Dollar Strength Could Be Challenged

Fed rate hikes contributed to a surge in the value of the U.S. dollar (USD) in 2022, Thomson notes, creating tight conditions for non‑U.S. borrowers, both public and private, who rely on USD funding. Less clear, he says, is whether this trend will continue in 2023.

“The dollar has always traded as a risk‑off asset,” Thomson observes. “What was unusual this time around was its persistent strength against other major developed market currencies.”

Despite weakening somewhat in the last quarter of 2022, as of late November the USD remained between 35% and 50% overvalued against the euro, the yen, and the British pound on a purchasing power parity basis, Thomson estimates.

Exchange rates can defy fundamentals for lengthy periods, Thomson notes. But, given the level of USD overvaluation, economic surprises—such as a sooner‑than‑expected Fed pivot—easily could push the U.S. currency lower in 2023. “We should expect a weaker dollar and think about what that would mean for portfolio construction,” he says.

Deglobalisation in a Connected World
Next Article