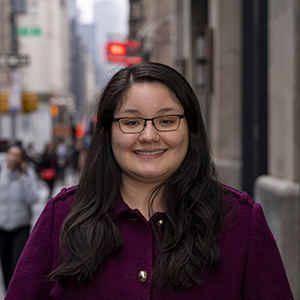 “You may face battles as a woman in tech, but it comes down to the company you work for. I'm so glad to say that T. Rowe Price is a company that views the fact that I'm female as an asset because I bring a different perspective to things."

Technology has become so central to conducting business that computer science majors now have seemingly endless career options open to them. Christina Thompson, a platform engineer in T. Rowe Price's Technology Development Center in New York City, fits that description. She spent several years after graduation working at various companies it provided her with the perspective to now know what matters most to her in the workplace.

"I was at a startup for about nine months before I joined T. Rowe Price," she recalls. "There were consistent issues with funding and turnover, such as a new person hired and fired every four weeks. It just didn't feel good to me."

Before accepting that job, Christina had worked at Amazon as a support engineer, which she describes as being a help desk for other software developers. "I missed the stability there and not being worried about whether your next paycheck would happen," she says.Then she learned about an opportunity with T. Rowe Price. For Christina, the firm's workplace atmosphere combined the best of both worlds. "T. Rowe Price offered the chance to work with cutting-edge technology," she says. "But it also offered the stability that I felt at Amazon."

She started at T. Rowe Price almost three years ago as a junior engineer. And just a year later, she was promoted to platform engineer. "I mostly write Java backend services," she explains. "It's a huge system that will provide data for all of the other software engineers in the company so they can write all of their services using financial data."

Her current project uses technologies she had never heard of before joining the firm platforms like Spark, EMR, and AWS. "We're the first team at T. Rowe Price to implement a project using this language, which is incredible," she says. "Having the flexibility to use something the firm has never used before is pretty unheard of in tech. We're also going to set the guidelines for how such platforms should be used within the firm, which is so exciting."

At past jobs, Christina was often the only female software engineer on her team or even in the entire company. But at T. Rowe Price, she has half a dozen women colleagues out of the 55 associates in the firm's Technology Development Center.

"While there are many, many instances where you're going to face battles just because you're a woman in tech, it comes down to the company you work for," she says. "I'm so glad to say that T. Rowe is a company that views the fact that I'm female as an advantage because I bring a different perspective to things."

In contrast with most workplaces, the firm is known for identifying associates' talent and nurturing growth while on the job. For example, Christina had been working in support roles when she applied for the T. Rowe Price job and hadn't been a so-called "handson-keyboard" software developer for years. Instead of seeing this as a disadvantage, the firm recognized her experience as something that could add real value to her computer science background.

Christina also gives credit to her manager for letting her learn new systems, platforms, and technologies in a way that makes sense for her learning style. "I don't learn from taking classes, and my boss has been very understanding of that," she says. "I get more from starting small projects with the technology, just tinkering with it to see how it's different and how it compares to existing platforms until it clicks. My boss has been very flexible in working with me, which is probably the reason why I was able to get promoted so quickly."

Her experience with the firm has also shattered her prior misconceptions about what working in the financial services industry. For instance, tech workers regularly anticipate struggling against red tape and other obstacles to get new programs going. "There's a belief that, in finance, it's going to be all mainframes and code that hasn't been touched for 30 years," she says.

"The reality is that working at T. Rowe Price is like working for a startup, but you have the stability of a big company," she explains. "Our Chief Technology Officer is the one who's passing down initiatives to bring the firm into the 21st century and find the smartest solutions available. It feels very refreshing to know that you don't have to fight to get the latest and greatest."