Why Deleveraging Is The True Culprit Weighing On Growth

February 10, 2020
Fears over “secular stagnation” appear to be overdone.

Persistent low and negative interest rates have prompted fears that the global economy has entered a period of chronic weak demand, famously described by former U.S. Treasury Secretary Larry Summers as “secular stagnation.” It is easy to see why people are concerned: Since the 2007–2008 global financial crisis (GFC), monetary policy has been continuously loosened to prop up growth—with disappointing results. The proximity of policy rates to the lower bound also means there is little policy space should we encounter a negative demand shock, leaving central banks with a major headache.

I do not believe that the primary cause of the sluggish growth over the past decade is secular stagnation. Rather, the unprecedented low rates of recent years are, in my view, the product of a protracted deleveraging process that is likely to reverse at some point. As such, I think that the global economy is probably in better shape than the proponents of secular stagnation would have us believe.

...the unprecedented low rates of recent years are, in my view, the product of a protracted deleveraging process...

The Four Phases of Postcrisis Deleveraging

What were these imbalances? I think there were three main ones. First, in the years preceding the financial crisis, loose financial conditions facilitated an enormous construction boom. This imbalance, most pronounced in the United States and the troubled economies in the south of Europe, left the world with an inventory backlog that we have been working to reduce ever since. Second, shocks to housing caused more damage to household balance sheets than shocks to the financial markets. Housing is the prime store of wealth for most families, whereas stock investing is the privilege of the elites only. In combination with more prudent lending standards, the impairment of households’ balance sheets has frustrated households’ access to credit. Third, in response to the financial crisis, fiscal deficits ballooned and emerging markets, which entered the crisis with pristine private sector balance sheets, promoted a rapid expansion of credit to the private sector.

The deleveraging process has diverged across regions. In the U.S., while households have aggressively brought down their debt levels, the nonfinancial corporate sector has substantially increased its borrowing. The borrowing by the nonfinancial corporate sector has been mainly used for financial engineering (stock repurchases, dividend payments, acquisitions), which, unlike capital formation, does not support growth. In Europe and Japan, deleveraging has been multifaceted, but there has been a strong impulse to reign in the fiscal deficits that ballooned during the great financial/Eurozone sovereign crisis. The deleveraging process in China has been orchestrated by a decisive swing in the policy priority from growth to financial stability and has been concentrated in the non‑household sector.

What happens when everybody wants to deleverage—i.e., save—at the same time? Deficient final demand drives down growth and a surplus of loanable funds drives down interest rates. However, it would be a mistake to believe that there is anything “natural” about a secular state of deleveraging. In any economy with a growing population, household debt should be an increasing share of aggregate income as growth in the number of households requires growth in the stock of available housing. In turn, this requires someone to take on a mortgage—either the household or the landlord.

One consequence of the deleveraging process is that it has left the global economy with very few macro imbalances...

One consequence of the deleveraging process is that it has left the global economy with very few macro imbalances: We do not experience capex or consumption booms in economies that deleverage. Most recessions emerge in response to excesses; therefore, seen through a macro prism, the global economy finds itself in an unusually resilient state given the already long‑lived expansion. So while there will inevitably be a correction at some point, the absence of a real economy macro imbalance should lessen its severity.

Are we too cavalier about the rising debt levels of the U.S. nonfinancial corporate sector? This is clearly a financial fragility that, most likely, will play a prominent role in the next recession. However, as this debt has not found its way into the real economy in the form of a capex boom, it has likely not created much of a macro distortion.

What will it take for consumers and businesses to begin to borrow again and trigger growth? That is a more difficult question. Beyond completing the inventory adjustment in construction/housing, taking on debt requires a certain amount of confidence in the future, of which stable politics is a key component. The past few years, however, have given us the on‑off U.S.‑China trade dispute, the prolonged saga of Brexit, and the rise of populist, antiestablishment political parties in many countries. A degree of political stability may need to return before households and firms begin spending again.

We will explore the likely timing of any return to leveraging in a separate article. For now, we reemphasize the point that the chronically low demand and low level of interest rates that we have experienced over the past decade seem to be, more likely, the result of a deleveraging process instigated by a large buildup of macro imbalances prior to the global financial crisis and not to secular stagnation. As such, the global economy is likely in much better shape than the proponents of secular stagnation argue.

The views contained herein are those of the authors as of February 2020 and are subject to change without notice; these views may differ from those of other T. Rowe Price associates.

Get strategies and tips for today’s market conditions.
Learn More 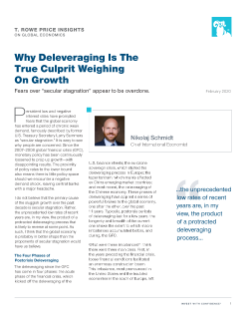