June 17, 2019
A good signal for environmental reforms and their impacts on companies.

Water, Energy. Food. Three vital components for sustainable development. The interaction of these factors is commonly referred to as the water‑energy‑food nexus (WEF‑Nexus). Understanding how the three components interact provides a platform for identifying and analyzing potential effects on companies and industries, most notably through the nature and pace of resulting regulatory reform.

As Figure 1 illustrates, a multitude of factors work to drive demand for food, water, and energy—including changes in population, urbanization, diets, and economic growth. These dynamics are creating complex challenges around the globe. If one WEF‑Nexus component is mismanaged, the other two will ultimately feel the impact.

The linchpin of the WEF‑Nexus is water—as a finite resource, water scarcity has a direct impact on food supply. If a local WEF‑Nexus spirals out of balance, lack of water shifts from being a global, long‑term sustainability concept to a more local and immediate problem. As a result, a country’s water‑energy‑food balance can be a good indicator of the likelihood of greater environmental regulation.

The factors driving demand for water, energy, and food 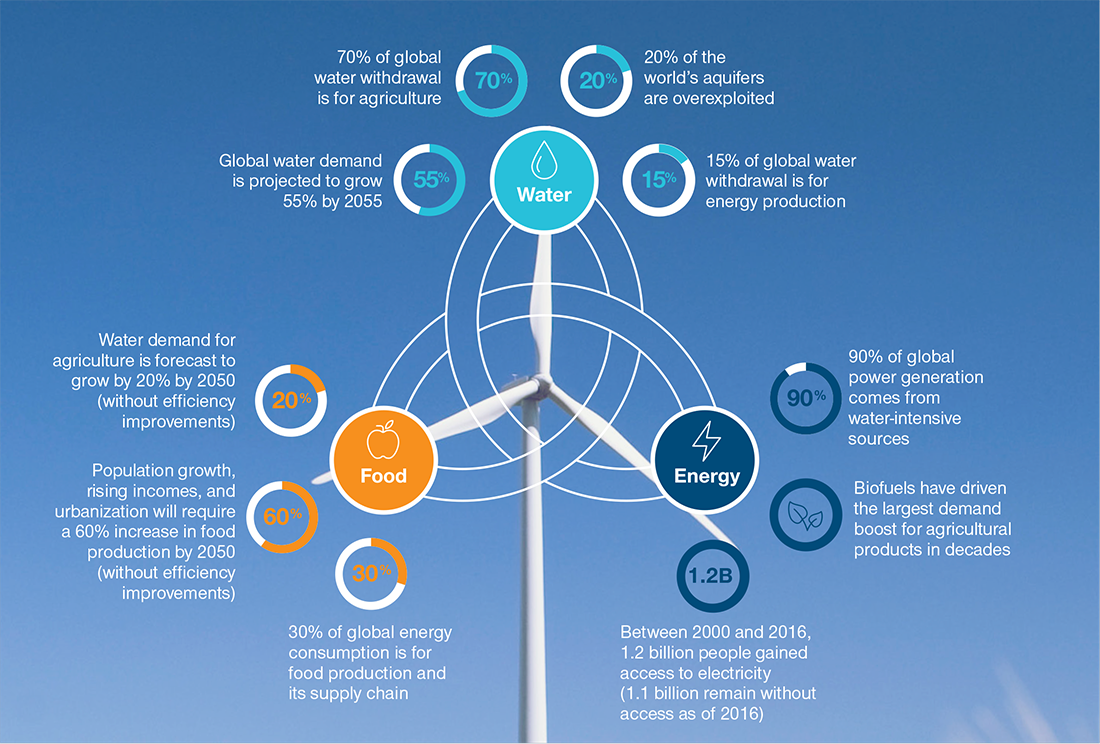 These rapid changes have had a significant impact on each country’s WEF‑Nexus, which has been further compounded by the fact that neither is water‑rich. Water scarcity isn’t only an issue for China and India. Today, nearly a quarter of the world’s population live in water‑scarce regions. In the next two decades, the number of people exposed to water scarcity is expected to double from the current 1.6 billion, largely due to economic growth and urban migration.

It is typically easier for politicians to mobilize around locally impactful issues (like water scarcity, rising food prices, or pollution) than a globally focused, long‑term issue like climate change. However, as the impact of climate change intensifies, scientists predict more regions will encounter water scarcity. This means WEF‑Nexus pressures will become a local issue in more and more countries over time.

As the pull on this finite resource forces more regions into water scarcity, we expect greater intervention by governments as they struggle to manage their water, energy, and food resources.

This in turn will likely have a downstream effect, impacting the energy, utility, and transportation sectors as well as other sectors indirectly exposed to the WEF‑Nexus.

From an investment standpoint, water, energy, and food are each important considerations, but the emergence of water issues is often a catalyst for swift regulatory intervention.

From an investment standpoint, water, energy, and food are each important considerations, but the emergence of water issues is often a catalyst for swift regulatory intervention. The mismanagement of water resources is difficult to reverse, and because prices often do not signal a scarcity issue until too late, regulatory responses can be drastic.

As current water data are not always readily available, water often needs to be considered as an intangible factor in the investment process. While an imbalance of the WEF‑Nexus can be a catalyst for swift environmental reforms, it is important for investors to consider the interplay of environment, price, and security that policymakers must account for.

Insights into the WEF‑Nexus provide a valuable lens from which we can better understand the potential impact of environmental dynamics on company performance. When we see one WEF‑Nexus component fall out of balance, we can monitor the impacts likely to be experienced by the other WEF‑Nexus components and the companies that operate within them.

The views contained herein are those of the authors as of June 2019 and are subject to change without notice; these views may differ from those of other T. Rowe Price associates. 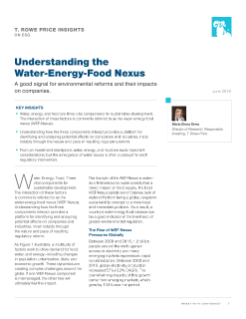