Registration incomplete.
Please reference the email we sent you and click the link to confirm. If you don't see an email, please check your spam folder orrequest another email.
We need to confirm your email.
We've been unable to send a confirmation through to the email address provided. Please kindlyconfirm your email address to complete your subscription and start receiving email updates.
Home / Insights / 2019 / Q4 / Comfortable With the Uncomfortable

The "reflation trade" appears real, but risks are still elevated.

David Giroux, CIO, equity and multi‑asset, thinks much will depend on whether the economic reacceleration that equity markets appear to expect in 2020 actually happens.

While economic headwinds were strongest in non‑U.S. markets in 2019, signs of stabilization are visible there as well, according to Thomson. EM equities appear to be best positioned to benefit from global reflation, Thomson adds. “Emerging markets are a cyclical asset class and should do better in that environment.”

Renewed efforts by the U.S. Federal Reserve and other key central banks to support the global economy with monetary easing appeared to be working as 2019 drew toward a close, potentially setting the stage for a reacceleration in economic growth in 2020.

“I think we now have a reasonable understanding that growth and inflation expectations are bottoming,” Thomson says. Some of the signs:

These signals do not mean the global economy is entirely on solid footing, Vaselkiv warns. A major political or financial shock potentially could trigger a renewed downturn. “We may be at an inflection point, where some sort of catalyst or crisis could tip the world economy into recession.”

As of late 2019, the U.S. economy remained in an expansion, largely sustained by consumer spending. But the slowdown in capital spending had put the brakes on earnings momentum, with 2019 per‑share earnings growth for companies in the S&P 500 Index expected to fall into the low single digits.

As of late November, forward‑looking multiples for the S&P 500 appeared somewhat high, although not exceptionally extended in historical terms, Giroux says. However, those valuations were predicated on consensus estimates of 10% earnings growth in 2020. That might be overly optimistic, Giroux cautions.

If an economic reacceleration doesn’t materialize, or isn’t strong enough to produce the expected earnings gains, “I think equity markets have a lot of room for the downside,” Giroux warns.

European economic and earnings growth were weak in 2019, as the slowdown in global trade hurt Germany’s export‑dependent manufacturing sector. Although European economies started to see “green shoots” of recovery late in the year, longer‑term factors—such as declining populations and weak productivity—could limit growth to 1% in 2020, Vaselkiv says, citing recent forecasts from the International Monetary Fund.

The European equity outlook also will depend on earnings in Europe’s financials sector, which has a heavy weight in regional indexes. But low interest rates and flat or inverted yield curves are major obstacles. “We need to see banks be able to start making positive spreads on new lending,” Thomson says.

However, by the same token, Japanese equities have benefited disproportionately from an improved global outlook. Whether that relative trend persists in 2020 will depend on a continued global reflation, Thomson says.

China’s growth slowed sharply in 2019, and is likely to continue decelerating in 2020, Vaselkiv says. This slowdown is only partially due to the trade war. High debt levels and declining demographics also have imposed structural constraints.

Chinese policymakers appear less inclined than in past slowdowns to stimulate credit and spending, as curbing debt growth among highly leveraged financial institutions appears to be a higher priority.

On the positive side, China’s consumer market continues to expand, driven by real (after‑inflation) gains in wages and household disposable income, Thomson notes.

On a cyclically adjusted basis, relative price/earnings ratios favor non‑U.S. equities by the widest margin since at least 1995.

Like Japan, the EM economies as a group are highly leveraged to the global economy. This led to volatile equity returns in 2019.

With currency values adjusted on a purchasing power parity basis, EM equities appear inexpensively priced, particularly compared with the U.S. market, Thomson says. Currency effects could add to their appeal if the dollar weakens in 2020.

Central Banks and the Search for Yield

The policy shift has been both widespread and dramatic, Vaselkiv notes. While 2018 saw approximately two interest rate increases globally for every cut, that trend flipped in 2019, with 91 rate cuts worldwide but only 16 rate hikes.

“Clearly, central banks have been making a synchronized effort to expand liquidity to support the global economy,” Vaselkiv says.

Vaselkiv does not expect the Fed to cut rates further in the closing weeks of 2019 and says it probably will not cut them in 2020. However, he predicts that global monetary policy will remain supportive as the European Central Bank and the Bank of Japan continue their quantitative easing programs.

While the pool of negative‑yielding debt shrank somewhat as bond markets recovered from a late‑summer flight to quality, it still accounted for over USD 13 trillion in bonds outstanding—24% of total global market value—as of the end of October 2019. 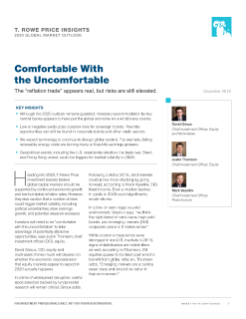 Comfortable With the Uncomfortable

Information has been obtained from sources believed to be reliable but J.P. Morgan does not warrant its completeness or accuracy. The index is used with permission. The Index may not be copied, used, or distributed without J.P. Morgan’s prior written approval. Copyright © 2019, J.P. Morgan Chase & Co. All rights reserved.