Registration incomplete.
Please reference the email we sent you and click the link to confirm. If you don't see an email, please check your spam folder orrequest another email.
We need to confirm your email.
We've been unable to send a confirmation through to the email address provided. Please kindlyconfirm your email address to complete your subscription and start receiving email updates.
Home / Insights / 2019 / Q2 / Understanding the Water Energy Food Nexus

A good signal for environmental reforms and impacts on companies.

Water. Energy. Food. Three vital components for sustainable development. The interaction of these factors is commonly referred to as the Water‑Energy‑Food Nexus (WEF‑Nexus).

Changes in population, urbanization, diets and economic growth drive demand within each segment—creating complex challenges around the globe. If one WEF‑Nexus component is mismanaged, the other two will ultimately feel the impact.

The linchpin of the WEF‑Nexus is water—as a finite resource, water scarcity has a direct impact on food supply. If a local WEF‑Nexus spirals out of balance, lack of water shifts from being a global, long‑term sustainability concept to a more local and immediate problem. As a result, a country’s water‑energy‑food balance can be a good indicator for the likelihood of greater environmental regulation.

Understanding how the three components interact provides a platform for identifying and analyzing potential effects on companies and industries, most notably through the nature and pace of resulting regulatory reform.

This paper analyzes the rise of WEF‑Nexus pressures across the globe and highlights how insights into the WEF‑Nexus imbalance in China is guiding our investment analysis across a range of industries.

Water, energy and food are three vital components for sustainable development. The interaction of these factors is commonly referred to as the Water‑Energy‑Food Nexus (WEF‑Nexus).

As Figure 1 illustrates, a multitude of factors work to drive demand for food, water and energy—including changes in population, urbanization, diets and economic growth. These dynamics are creating complex challenges around the globe.

As we seek to understand the effect of these complex interactions on companies and industries, a key indicator is the nature and pace of resulting regulatory reform.

(Fig. 1) The Water‑Energy‑Food Nexus
The factors driving demand for water, energy, and food

While this paper largely focuses on the effects of the WEF‑Nexus on the environment, it is important to recognize its significant social impact.

Two of the most important social factors affecting environmental reforms are employment and public health. In China, for example, the planned shift to a “circular economy” will stimulate growth in better‑quality jobs. The ability of the government to put pressure on “non‑circular” industries has been made easier as the growing service sector has created new employment opportunities.

Meanwhile, as China’s air, soil, and water pollution problems have prompted public health concerns, the government’s regulatory agenda has evolved to place a greater emphasis on ecological factors. As in the developed world, public health is often a good catalyst for environmental reform—particularly in countries with universal health care.

Between 2000 and 2016, 1.2 billion people around the world gained access to electricity and many emerging markets experienced rapid industrialization. Between 2000 and 2015, global electricity production increased 57% (3.0% CAGR). The overwhelming majority of this growth came from emerging markets, which grew by 135% over the period. Electricity production in China and India increased 332% and 143%, respectively, while water withdrawals increased 24% and 25%. These rapid changes have had a significant impact on each country’s WEF‑Nexus, which has been further compounded by the fact that neither is water rich.

Water scarcity isn’t only an issue for China and India. Today, nearly a quarter of the world’s population live in water‑scarce regions. In the next two decades, the number of people exposed to water scarcity is expected to double from the current 1.6 billion, largely due to economic growth and urban migration. Regions and countries facing the greatest water and pollution stresses include:

It is typically easier for politicians to mobilize around locally impactful issues (like water scarcity, rising food prices, or pollution) than a globally focused, long‑term issue like climate change. However, as the impact of climate change intensifies, scientists predict more regions will encounter water scarcity. This means WEF‑Nexus pressures will become a local issue in more and more countries over time. Key indicators of looming environmental reforms include:

As the pull on this finite resource forces more regions into water scarcity, we expect greater intervention by governments as they struggle to manage their water, energy, and food resources. This in turn will likely have a downstream effect, impacting the energy, utility, and transportation sectors as well as other sectors indirectly exposed to the WEF‑Nexus.

From an investment standpoint, water, energy, and food are each important considerations, but the emergence of water issues is often a catalyst for swift regulatory intervention. The mismanagement of water resources is difficult to reverse, and because prices often do not signal a scarcity issue until too late, regulatory responses can be drastic.

As current water data are not always readily available, water often needs to be considered as an intangible factor in the investment process. Figure 2 illustrates how an investment process may be modified to consider the WEF‑Nexus. In this example, the traditional “energy trilemma”—which balances the security of supply, price, and environment—is reconfigured to include water dynamics.

While an imbalance of the WEF‑Nexus can be a catalyst for swift environmental reforms—as has been the case in China—it is important for investors to consider the interplay of environment, price, and security that policymakers must account for.

Policy measures to improve the environment are generally tied to both environmental and social benefits. However, the attainment of any social benefit is typically longer‑term and can come with short‑term trade‑offs. For example, measures to lower pollution by transitioning to cleaner fuels aim to bring long‑term societal health benefits, but energy prices are likely to rise in the short term. This type of trade‑off can make it more difficult for policymakers to implement environmental reforms on a consistent basis. It can drive a start‑stop approach in regulation implementation due to dependency on prevailing economic conditions.

In China, WEF‑Nexus problems have been amplified by three decades of exceptional economic growth and rapid industrialization. As the economy expanded, energy demand was largely met by coal‑fired generation. As a domestic resource, coal had the benefit of security of supply at a low price, but its use took a toll on the environment in the form of air pollution and water intensity. Overdependence on coal, coupled with relatively lax environmental standards for the industry, has thrown China’s WEF‑Nexus out of balance. China faces threats to food supplies from soil and water pollution, health hazards for citizens due to poor air quality, and a multitude of risks due to water shortages.

China began a “war on pollution” many years ago and is beginning to see benefits, including regional improvements in air and water quality. T. Rowe Price analysts and portfolio managers have been navigating China’s changing environmental landscape for several years and believe it is still early innings for what will likely be a multi‑decade restructuring of the country’s economy.

Environmental damage in China is felt at both global and local levels. Consequently, the country’s ecological reform program has a twofold approach. At a global level, China’s water supply is predominantly sourced by rivers flowing from the Hindu Kush Himalayan glaciers, referred to as the “water towers of Asia.” These are vulnerable to climate change and are showing signs of retreat. Retreating glaciers not only affect China’s long‑term water supply, but also have the potential to instigate regional conflict.

In 2015, China made a strong commitment to help address climate change by pledging to reduce its carbon intensity by 60%–65% by 2030 relative to 2005 levels. To achieve this, the country intends to double the level of low‑carbon fuels within its energy mix to 20% by 2030. Power generation is expected to drive the bulk of this shift, with coal de‑emphasized while renewables are prioritized as a key industry on the “Made in China 2025” agenda.

China’s efforts to mitigate global climate change should yield domestic dividends in the form a healthier water system and rivers. It should also help reduce water demand from energy generation due to lower dependency on water‑intensive, coal‑fired electricity production.

The country is also aggressively managing its economy at the local level to bring its WEF‑Nexus back into balance. At the heart of its local environmental reforms is a shift toward a circular economy, which is de‑emphasizing any industry that overextends China’s natural resource balance without a commensurate social gain.

Maria Elena Drew is a director of research for Responsible Investing at T. Rowe Price. 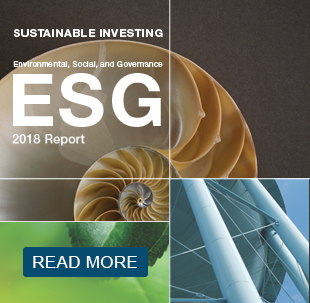