For private sector American workers, funding retirement is now largely dependent on workplace-provided 401(k) plans and Social Security. New T. Rowe Price research shows that it is a system that can be successful when people have access to it and use it.

What is a successful retirement? Our research shows that retired workers are faring better than current workers expect to fare (Figure 1), and better than what they had expected themselves.

of satisfied retirees report that they live as well or better in retirement as they did while working.

Of the total population of retirees we surveyed, 85% indicated that their retirement turned out to be as good or better than expected, with 80% saying that their retirement years are more enjoyable than their working years. By contrast, 14% indicated that retirement was worse than expected. We can gain valuable insights into potential drivers of satisfaction by examining the differences between satisfied and unsatisfied retirees.

Also critical for individuals is their ability to maintain a standard of living in retirement that is similar to their working years. This affirms our belief that finances play an important role in retiree satisfaction:

Retiring When I Want, and Working Only for Enjoyment

Our research finds that a 401(k) plan can make the difference between a satisfied retirement and an unsatisfied one. Employees with sufficient retirement savings can retire when they want, work in retirement only if they choose to, and generally enjoy a more satisfactory retirement. The key to success is saving enough—starting early, saving at high enough rates, and staying on track.

Actions for Advisors and Plan Sponsors

Understanding the drivers of retiree satisfaction can help plan sponsors and their advisors create better plans. First, and most importantly, since retirement assets and income play such an important role in satisfaction, plan design initiatives should push early, steady, and higher rates of saving. These include increasing the initial automatic deferral rate to at least 6% and adding automatic escalation so that participants reach a savings rate of 15% (including employer contributions) as early as possible in their careers.

Second, employee communication strategies should teach employees that beyond the savings rate, other factors such as health care costs, how someone retires, and post-retirement employment, can make the difference between retiree satisfaction and dissatisfaction. Many plans ignore these, stressing only a targeted savings goal. But participants who first understand the reasons for accumulating assets by learning about the causes of an unsuccessful retirement, and then understanding their own ability to retire on their own terms, might actually take the actions that their calculators suggest.

T. Rowe Price engaged NMG Consulting to conduct a national study of 3,005 adults aged 21 and older who have never retired and are currently contributing to a 401(k) plan or are eligible to contribute and have a balance of at least $1,000. We also included an oversample of 1,005 adults who have retired with a rollover IRA or left-in-plan 401(k) balance. The online survey was conducted from July 24 to August 14, 2018. This is the fourth in a series of participant surveys, and data from prior surveys is used in this report for comparison purposes.

For more information on this and our other extensive research on retirement savings and spending, please contact your T. Rowe Price representative.

1Agreed "somewhat" or "completely" that "so far, my retirement has turned out to be just as good or better than expected."

2Agreed "somewhat" or "completely" that "so far my retirement has turned out to be worse than expected."

4Market value of accounts of self and other adult, including traditional or Roth IRAs, 401(k), Roth 401(k), 403(b), 457, profit sharing, or other DC accounts at current or former employers.

This material has been prepared by T. Rowe Price Retirement Plan Services, Inc., for general and educational purposes only. T. Rowe Price Retirement Plan Services, Inc., its affiliates, and its associates do not provide legal or tax advice. Any tax-related discussion contained in this material, including any attachments/links, is not intended or written to be used, and cannot be used, for the purpose of (i) avoiding any tax penalties or (ii) promoting, marketing, or recommending to any other party any transaction or matter addressed herein. Please consult your independent legal counsel and/or professional tax advisor regarding any legal or tax issues raised in this material. 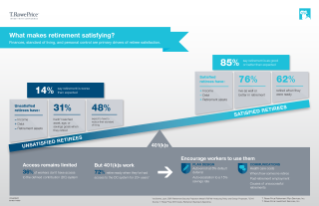 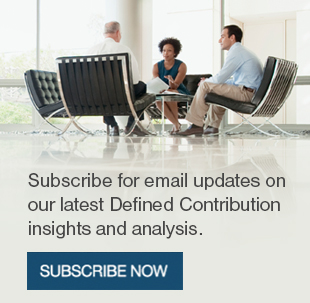