THE PATH TO TRANSFORMATION— PEACE, POLITICS, INVESTMENT, AND GROWTH

When T. Rowe Price launched the Frontier Markets Equity Strategy in June 2014, we noted that many characteristics of the frontier countries were reminiscent of the emerging markets of the late ’90s—state of democracy, levels of investment, demographics, rising urbanization, nominal GDP levels, GDP per capita, and very low market capitalization (Figure 1). As we see improvements in these political and economic indicators, we should expect frontier markets to grow significantly in terms of market representation.

Starting with peace: Looking back to the mid-90s, there were close to 50 separate major conflicts going on between and in frontier markets (e.g., Sri Lanka’s civil war and conflict in the Niger Delta). That number has significantly reduced as of today, and the ending of these major conflicts has provided a foundation for political improvements. In many of the frontier countries, we have seen an embracing of the democratic process and several examples of peaceful handovers to political oppositions (e.g., Nigeria, Argentina, Sri Lanka, and Georgia). Notably, Pakistan’s government served its first full term without a coup in almost 70 years. The democratic process encourages governments to focus on economic improvements with the motivation of getting reelected and has led to completion of IMF programs, capital market liberalizations, and policies to attract investment.

FIGURE 1: Frontier Markets’ Growth Potential Is Similar to That of Emerging Markets in the Late ‘90s

Vietnam is one such case, where levels of foreign direct investment (FDI) have been rising year-on-year, with its booming electronics market attracting the lion’s share of inflows as the country becomes a global manufacturing hub (Figure 2). Meanwhile, Argentina is playing catch-up as Mauricio Macri’s administration continues to enact market-friendly reform, which has won praise and renewed the confidence of international investors.

FIGURE 2: Countries Like Vietnam Are Attracting Huge Levels of FDI

Many frontier countries also have debt and inflation under control. The combination is a powerful driver for growth, with frontier markets consisting of some of the fastest-growing economies globally. The group as a whole is expected to outpace emerging markets and significantly outpace developed markets in terms of GDP growth throughout the rest of this decade and likely beyond.

Our belief is that this favorable economic backdrop will translate into robust earnings growth for well-managed companies, in turn leading to better investment returns. We saw this in the last decade with the emerging markets equity asset class where country investment returns were highly correlated to nominal GDP growth. We have identified many companies that have the ability to generate positive and potentially sustainable double-digit earnings growth for many years to come. In fact, our bottom-up fundamental research shows that there are some companies with visible earnings growth that could potentially reach 100% over three years.

FRONTIER MARKETS IN A PORTFOLIO CONTEXT

Over the past five years, frontier markets significantly outperformed emerging markets and most developed market regions on a risk-adjusted basis, while exhibiting lower standard deviation than these asset classes (Figure 3). Efficient frontier analysis easily confirms the benefit of including an allocation to the asset class. Of course, we should still expect some volatility from frontier, markets but in a portfolio context, one of their key attributes is a very low level of correlation between other markets, and therefore, other asset classes, so, adding frontier market exposure to portfolios provides significant diversification benefits.

Frontier economies are at an earlier stage of development and, in most cases, are not tied into global manufacturing supply chains and are therefore less impacted by global cycles. Even though frontier’s correlation with global stocks has increased over the last couple of years, it still remains very low at 0.44 (Figure 4). In the period in 2012 when correlations were higher, the UAE and Qatar were significant parts of the frontier asset class (since then reclassified to emerging market), and there was much higher participation from non-dedicated investors, a situation that tends to increase correlations as flows become more driven by global markets.

FIGURE 4: Frontier Markets if You Are Looking for Diversity

According to our research, the current level of this “crossover” or non-dedicated investment in frontier markets is extremely low, leaving us more comforted that the asset class should not be affected by their outflows (particularly the situation of non-dedicated investors cutting their “riskiest” or off-benchmark positions during tough times). Looking at the top 15 emerging market portfolios, only seven of them have any frontier market exposure, and typically, that consists of just one or two stock holdings (Figure 5). That leads us to advise that if you are seeking exposure you need a dedicated frontier portfolio to access the opportunity in these markets. Gaining exposure to a couple of holdings via your emerging market manager is not enough.

One area where there is correlation with global trends is in the oil and commodity space. While the sector allocation is low (energy and materials represent 12.3% of the MSCI Frontier Markets Index1), several of the large index countries are net oil exporters and oil can represent a significant portion of fiscal revenues and impact overall economic health. The large oil exporters, are Kuwait, Oman, Kazakhstan, and Nigeria, along with non-index Saudi Arabia. There are also several countries largely dependent on at least one other commodity, although typically, these tend to be the smaller African nations (e.g., Zambia’s dependency on copper).

Frontier markets as a whole have therefore not been immune to the downward shift in oil and other commodities. However, many of the frontier countries have adjusted to the new oil price reality by tweaking budgets and currencies and are now, in many cases, much better positioned to weather future volatility. Some economies, such as Saudi Arabia’s, are also taking initiatives to diversify away from oil and commodity dependence by channeling investment across different sectors.

NOW COULD BE THE TIME TO INVEST IN FRONTIER

Now could potentially be a particularly good time to allocate to frontier markets in our opinion. Frontier investing is still in its formative stages with investment coverage relatively scarce, making the asset class much less efficient than its emerging and developed market counterparts. By making at least a small allocation to frontier today, and staying invested in what are predominantly long-term investment opportunities, clients can potentially achieve strong investment returns as companies and economies grow quickly from a very low base. While there may be pockets of volatility, the longer-term direction of travel is clear.

Supporting this argument are frontier markets’ low valuations, which look relatively attractive when compared with other asset classes. Frontier market performance, as measured by the MSCI Frontier Markets Index, peaked in August 2014, from which point the market declined by 36%—amid sluggish global growth and the end of the commodities boom—to reach a trough in January 2016. Since then, frontier markets rebounded 25% as of the end of June, but the index still trails its peak levels by a significant margin. Corporate earnings have meanwhile outpaced these returns, resulting in cheap valuation levels on an array of metrics (Figure 6).

Low valuations come in tandem with a continuation of positive macroeconomic change and resulting news flow. Recent examples include Argentina, which typifies the investment case for the asset class as we define it. President Mauricio Macri was elected in November 2015, and through his administration’s focus on market-friendly reform, he has successfully renewed investor confidence in the country, attracting record levels of FDI. Necessary adjustments to the fiscal budget and currency have helped return Argentina to positive growth and have been supportive to local businesses.

Another good example of a country in the earlier stages of macroeconomic transformation is Sri Lanka, where we recently took an investment trip. The country has weathered a two-year period of relative inactivity and consequent underperformance, prompting participation in an IMF program that includes the formulation and oversight of proactive economic plans. The coalition government elected in 2015 is showing some seriousness in driving reforms, and we see a gradual adjustment playing out with support from a new wave of FDI led by China, a visible construction boom, and increasing tourism. While some risks remain, well-run companies have been performing strongly and are well positioned for future growth.

With the frontier markets strategy having just reached its third anniversary with almost 800 basis points of alpha (annualized) under its belt, we would like to highlight the key differentiators that have driven the outperformance versus both the benchmark and peers:

Frontier Markets: The Path to Transformation 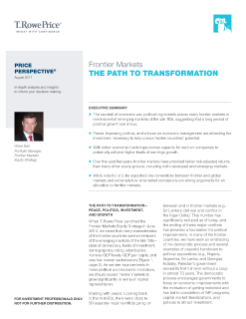 While volatility is to be expected, low correlations between frontier and global markets and extremely low intramarket correlations are strong arguments for an allocation to frontier markets.

Information and opinions presented have been obtained or derived from sources believed to be reliable and current; however, we cannot guarantee the sources’ accuracy or completeness. There is no guarantee that any forecasts made will come to pass. The views contained herein are as of the date noted on the material and are subject to change without notice; these views may differ from those of other T. Rowe Price group companies and/or associates. Under no circumstances should the material, in whole or in part, be copied or redistributed without consent from T. Rowe Price. 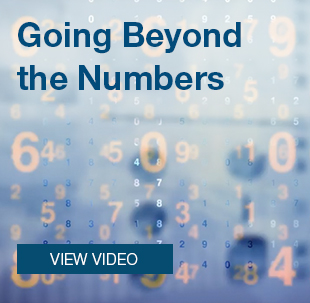