Registration incomplete.
Please reference the email we sent you and click the link to confirm. If you don't see an email, please check your spam folder orrequest another email.
We need to confirm your email.
We've been unable to send a confirmation through to the email address provided. Please kindlyconfirm your email address to complete your subscription and start receiving email updates.
Home / Insights / 2019 / Q2 / Global Growth Should Improve if Trade Disputes Don't Worsen

To a certain extent, market behavior in the first half of 2019 seemed to reflect two contradictory perceptions, argues Robert W. Sharps, chief investment officer (CIO) and head of investments:

On the positive side, market expectations for monetary policy shifted dramatically in the first half. Investors now lean toward the view that the U.S. Federal Reserve is more likely to cut interest rates rather than raise them further, according to Mark Vaselkiv, CIO, fixed income.

On the negative side, hopes for a trade deal between the U.S. and China deteriorated in May, and the Trump administration briefly threatened to impose tariffs on Mexican goods. Trade fears contributed to persistent strength in the U.S. dollar, keeping emerging market (EM) currencies under pressure, notes Justin Thomson, CIO, equity.

“A lot depends on a resolution of the trade war and on the emergence of green shoots of improving global economic and earnings growth,” Sharps says. “If we get those things, we could see the U.S. equity market make new highs. If not, expectations for 2020 clearly will need to come down.”

To a certain extent, market behavior in the first half of 2019 seemed to reflect two contradictory perceptions...

Global Growth Has Slowed, but Recessions Are Unlikely

Concerns about the strength of U.S. and global economic growth returned in the second quarter of 2019. The stellar U.S. earnings gains seen in 2018 abruptly stalled (Figure 1).

While the consensus earnings forecast is for a reacceleration later in the year, to get that result “you will have to see economies begin to improve, particularly outside the U.S.,” Sharps says. However, the global economic outlook remains subdued, according to Thomson:

Despite these headwinds, the risks of a U.S. or global economic downturn still appear limited. “I don’t see any major imbalances that would suggest a recession is imminent or even likely,” Sharps says.

The strength of the Chinese economy remains a key variable. Slow growth in late 2018 led Beijing to ease credit and boost spending, but the results may not have been as positive as Chinese policymakers desired. “If there is one thing that would make us change our generally cautious stance [on global growth], it would be if China increases stimulus again,” Thomson says.

If there is one thing that would make us change our generally cautious stance [on global growth], it would be if China increases stimulus again.

(Fig. 1) U.S. and Global Earnings Growth Has Stalled
Cumulative Growth in Earnings Per Share by Region
December 2013 Through May 2019

Thomson warns that the trade war is metastasizing into a technology war.

A series of events in May—including fresh tariff hikes by the U.S. and China; U.S. sanctions against Huawei, a major Chinese telecommunications firm; and the Trump administration’s threat to impose tariffs on Mexico—helped reignite fears of an escalating trade war.

Although the U.S. and Mexico reached a deal in June that appeared to avoid tariffs, these and other geopolitical events contributed to a surge in perceived economic policy uncertainty—particularly in China, but also in the U.S. and Europe (Figure 2).

A trade deal between the U.S. and China is still within reach, but neither country may feel a need to compromise quickly:

While the direct impact of tariffs on economics and earnings growth appears manageable at the moment, the secondary effects on business confidence, capital spending, and hiring could diminish hopes for a second‑half earnings rebound, Sharps warns. “I don’t think that’s likely, but it certainly is a possible outcome.”

Trade may be the most significant political risk facing investors, but it’s not the only one. Recent elections in Europe have shown that populist anger remains a potent political force.

In the UK, a heated leadership contest following Prime Minister Theresa May’s resignation could intensify pressure for a “no deal” Brexit, with major negative implications for the UK and European economies.

...if the Fed goes with a 50‑basis point cut, I think that could really spook the markets because that would say, ‘Wow, things are worse than anticipated.’

Growth Fears Will Pressure the Fed

The first half of 2019 ushered in a dramatic shift in market expectations for Fed policy. By late May, futures markets were pricing in as many as three Fed rate cuts by the end of 2020 (Figure 3).

A deepening inversion in the U.S. Treasury yield curve signals growing market confidence that the Fed’s next policy move will be downward, Vaselkiv says. “Fixed income investors in essence are daring and insisting that the Fed cut rates.”

But with policy rates still at historically low levels, and with the 10‑year Treasury note yielding less than 2.20% at the end of May, Fed policymakers have limited room to maneuver, Vaselkiv adds.

“We would not be surprised to see a 25‑basis‑point cut at some point later in the year to try to calm down volatility,” Vaselkiv says. “But if the Fed goes with a 50‑basis‑point cut, I think that could really spook the markets because that would say, ‘Wow, things are worse than anticipated.’”

If the Fed has limited room to cut rates, the European Central Bank (ECB) and the Bank of Japan (BoJ) appear to have virtually none, Thomson says. The ECB’s overnight deposit rate already is negative, while the BoJ is continuing to hold interest rates out to 10 years effectively at zero.

(Fig. 3) Investors Expect the Fed to Cut Rates
Futures Markets Versus FOMC Projections of the Federal Funds Rate
As of May 31, 2019 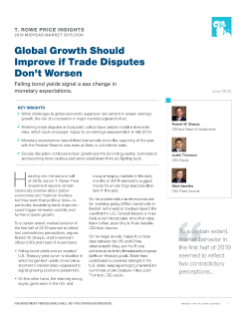 MSCI and its affiliates and third-party sources and providers (collectively, “MSCI”) makes no express or implied warranties or representations and shall have no liability whatsoever with respect to any MSCI data contained herein. The MSCI data may not be further redistributed or used as a basis for other indices or any securities or financial products. This report is not approved, reviewed, or produced by MSCI. Historical MSCI data and analysis should not be taken as
an indication or guarantee of any future performance analysis, forecast or prediction. None of the MSCI data is intended to constitute investment advice or a recommendation to make (or refrain from making) any kind of investment decision and may not be relied on as such.

The S&P 500 Index is a product of S&P Dow Jones Indices LLC, a division of S&P Global, or its affiliates (“SPDJI”), and has been licensed for use by T. Rowe Price. Standard & Poor’s® and S&P® are registered trademarks of Standard & Poor’s Financial Services LLC, a division of S&P Global (“S&P”); Dow Jones® is a registered trademark of Dow Jones Trademark Holdings LLC (“Dow Jones”). T. Rowe Price’s product is not sponsored, endorsed, sold or promoted by SPDJI,
Dow Jones, S&P or their respective affiliates, and none of such parties make any representation regarding the advisability of investing in such product nor do they have any liability for any errors, omissions, or interruptions of the S&P 500 Index.