Over the past 10 years, financial markets have been conditioned to expect a ‘China Put’: they have benefited from abnormal times in which China’s money printing could seemingly extend the global economic cycle indefinitely. My thesis is that this option is now out of the money, and that the probability of a China Put is at its lowest for the last decade. I believe the playbook is changing with respect to China’s ability and willingness to provide monetary stimulus. If I’m right, this has profound implications well beyond Chinese corporate bonds. Every global reflation trade since the global financial crisis (GFC) has been caused by, or coincided with, an expansion of Chinese monetary stimulus (Display 1).

Past performance is not a reliable indicator of future performance.
Through July 31, 2019
Source: Bloomberg Finance LP

In 2013, amid widespread headlines about ghost cities and property bubbles, Chris Kushlis and I undertook a detailed analysis of China’s financial system risks that concluded that there was further room for the Chinese credit cycle to run. In the six years since, my risk budgeting has been informed by the expectation of reliable Chinese monetary stimulus. And, for example, we’ve enjoyed outsized returns taking contrarian views in Chinese property as yields in that sector have compressed from approximately 12% to about 6%.

Today, however, it can be said without hyperbole that China has presided over the largest credit expansion in the history of the world post GFC. China’s outstanding credit stock equals about RMB 220 trillion ($US 32 trillion). Sometimes in our industry we get desensitized to large numbers, so to put this in context: $US 32 trillion is roughly 240% of China’s GDP and 40% of global GDP. Both the stock and flow of credit are at levels unforeseen in history, as shown in Display 2. There is simply not enough liquidity in China to continue funding that type of monetary stimulus. 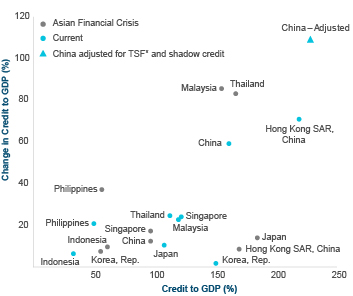 As of 10 July 2019
*China's total social financing (TSF) is a broad measure of credit and liquidity in the economy.
Source: World Development Indicators and data analysis by T. Rowe Price

Whether we are facing the actual end of Chinese monetary stimulus depends on two things: (1) the willingness and (2) the ability to provide stimulus. Any discussion of China’s willingness to continue with reflation would involve a lengthy detour into global power politics, so for the time being I will confine my comments to ability, which is based on economics applied to China’s unique development model.

China’s economic model has followed successful state capitalist development models from Japan, Korea, and Taiwan. There are patterns we can pick up on from previous cyclical evolutions, but we always need to take into account the idiosyncrasies of China’s unprecedented expansion. Constraints on China’s ability to provide stimulus include:

Inefficient credit. As the cycle has aged, each new unit of credit has produced a little less GDP as the efficiency of credit transmission has declined. China’s incremental credit to GDP output ratio has dwindled from a high of 1.1 in 2005 to less than 0.4 by the end of 2018.  The downtrend from 2005 to 2018 may have abated as shadow banking has been retrenched (deflating double- or triple-counted round-trip money) but we also know that China’s GDP numbers are thought to be overstated by around 170 basis points per annum1. Declining credit efficiency also reflects declining investment efficiency of state-owned enterprises, despite episodic periods of reform. The conclusion here is that the benefits of incremental money printing may be outweighed by the way in which it compounds the existing issue of unrecognized loan delinquencies.

Funding constraints. After a decade of monetary expansion, China has run into funding constraints, particularly outside the Big Four banks. Recent small bank failures are indicative of this. Capital controls (a form of financial repression) and more than 40% savings rates have driven unprecedented domestic monetary expansion. So far, China has successfully managed an unprecedented credit cycle because of its unprecedented control of liquidity. That’s the piece most Western observers have missed: they have focused on the assets rather than the liabilities. Loan-to-deposit ratios (LDRs) in the banking system have risen significantly, to above 110% when adjusted for shadow banking. (Historically, banking systems have run at 110% – 120% LDRs without ill effect but, beyond that level, the risks start to rise quickly.) Increased regulation of the shadow banking system has taken effect, with shadow-banking-adjusted LDR levelling off since 2017.  Nevertheless, China’s level of funding stability is not what it was in 2013.

External buffers are no longer adequate. It’s well documented that China’s current account surplus has eroded (from a high of 4% of GDP in 2010 to a range of 0% – 2% today) and will inevitably shift to deficit. That’s the reason why China has opened up its domestic equity and bond markets to foreign participation. With a more vulnerable balance of payments composition, foreign currency (FX) reserve adequacy comes more into focus. One way to measure this is the International Monetary Fund’s reserve adequacy ratio which sums up a weighted average of FX reserves relative to broad money, exports, short term debt and other liabilities. Compared with the IMF’s suggested range of 100% to 150%, China’s reserves have steadily declined from a high of 200% in 2009, to around 80% in 2019.

In other words, after several years of having more than enough reserves to meet its needs, that trend has flattened out in recent years, leaving China less comfortably over-insured than it used to be. The key variable explaining the deterioration in reserve adequacy has been expansion of money supply since 2008 (Display 3).

China’s predominantly local-currency denominated debt, largely closed capital account and soft-peg exchange rate regime could be considered mitigating factors for headline reserve adequacy, but the conclusion would be unchanged: compared with previous periods of monetary stimulus, China’s balance of payments position and reserve adequacy afford it less flexibility than they have in the past.

Rapid increases in credit to GDP raise crisis risk, but there are historical examples of countries that have managed to avoid a crash. Japan, Malaysia, Thailand and India, for example, have been through large credit expansions without a hard landing. China shares characteristics with this outlier group. However, almost no country has escaped secular growth stagnation following these credit booms2. As much as China’s path has resembled Japan’s on the way up, we may also see parallels during the unwind. China’s ability to provide monetary stimulus is declining. Willingness, a usually reliable component of the framework, has come more into question given the current paradigm of great power politics. If we do get the monetary response, given the enormous amount of historic stimulus, each reflation trade is likely to have less impact than the last. China can ease enough to support itself, but not the rest of the world, via the traditional reflation channels we’ve enjoyed in the last ten years.

Where could I be wrong? There could be either upside or downside challenges to my assumptions. On the upside, China could engineer another short-term credit stimulus. China has (brilliantly) managed down expectations for monetary stimulus, so it would only take a couple of months of surging credit and liquidity data to make me look foolish.  China would effectively be taking one last drink from the punch bowl at the risk of the tradeoffs discussed above. Aside from February 2019, the recent pattern has been to experiment with other forms of stimulus (fiscal, regulatory, etc.) to stimulate the economy.

The downside scenario is that China ‘cracks’. One of the most important equations in Emerging Markets is:  Vulnerability + Catalyst = Crisis. We know the vulnerability, but so far the catalyst has always been missing. Thinking outside the box, there is a small but growing probability that the US government, via the Treasury OFAC (Office of Foreign Assets Control) department, will target Chinese entities (state owned, technology, or military) with sanctions. President Trump has used OFAC sanctions more aggressively than any other administration in memory (see Russia, Venezuela, Turkey).  I know sanctions may sound like a dramatic escalation, but tariffs were also once considered a tail risk.

Finally: this note is intentionally titled ‘The Coming End of Monetary Stimulus’. As a portfolio manager I know first-hand that whether this happens in two months or two years makes a world of difference to our clients. But, throughout my career, I’ve found that documenting an investment thesis is essential before one can begin to discuss the timing.

2For example, in recent decades Vietnam has experienced a credit boom without suffering a banking crisis. But there have been material problems in its banking system including a large jump in non-performing loans.

See all article(s) by Malik Asif...
Dismiss
Tap to dismiss