What a Rough Quarter for Bonds Means for Asset Allocators

The bond market just had its worst quarter in more than 30 years. In fact, U.S. Treasuries performed worse than they have in a three-month period dating all the way back to before the Great Depression. So Sebastien, What happened?

Look, lower bond returns are not wholly unexpected when the Fed turns more hawkish. In the first quarter, we saw expectations for rate hikes basically for the Fed more than double.

And what I see as even more unusual is that, in a quarter in which stocks were largely down, bonds were also down.  So stocks and bonds typically move in the opposite direction during market sell-offs. So what happened?

That’s why we’re seeing a sustained positive correlation between stocks and bonds returns basically for the first time in 10 years.

And of course, diversification underpins well-built portfolios, and, Sébastien, you’ve written quite a bit about the power of diversification. But the question asset allocators may be asking now is—and I’m gonna be a bit dramatic on purpose here—Why invest in bonds at all?

Yeah Tim, that's a dramatic question. I think getting out of bonds completely would be short-sighted for most investors. We think a lot of the Fed’s hawkish turn has been priced in first of all. Besides, if we get a large equity sell-off, Treasuries could still be the most defensive asset class in a portfolio. It's very hard to find alternatives to Treasuries. And remember, when rates rise, the expected return on bonds rises too, which could provide a better entry point. Bonds are cheaper now than they were a year ago.

Alright, let’s talk about Asset Allocation Committee positioning. The Fed made it pretty clear at the end of last year that it was moving toward a more hawkish stance. And we adjusted. Coming into the year, our Asset Allocation Committee had lowered our exposure to interest rates while also favoring higher-yielding sectors such as floating rate. So, how are we positioning now?

That’s right, Tim. We were positioned for the Fed to adjust from a tactical perspective. Also, we maintain a strategic or long-term allocation to investment-grade bonds, we also include alternatives such as absolute return-oriented strategies. Tactically, if we take a six-to 18-month horizon, we are also overweight to higher-yielding sectors, including in particular floating rate loans, and, for potential defense, short-term TIPS.

Investors have different investment objectives, time horizons and risk appetites and not all investments are suitable for all investors.

Alternative Investment Strategies risks- Strategies such as absolute return involve risks, including possible loss of principal and are not suitable for all investors. There is no assurance that a strategy's investment objective will be achieved. These strategies may utilize derivatives. Additionally, they may utilize short positions. Short sales are considered speculative transactions with potentially unlimited losses. The strategies may use leverage which can magnify the effect of losses. Alternative investments may be more difficult to value and monitor. Certain alternative investment vehicles are illiquid, require certain investor qualifications be met and/or have higher investment minimums and fees than traditional investments, amongst other differences.

Diversification cannot assure a profit or protect against loss in a declining market. Actual outcomes may differ materially from expectations.

Fixed-income Risks- Fixed income securities are subject to credit risk, liquidity risk, call risk, and interest-rate risk. As interest rates rise, bond prices generally fall.  Investments in high-yield bonds involve greater risk of price volatility, illiquidity, and default than higher-rated debt securities.  In periods of no or low inflation, other types of bonds, such as US Treasury Bonds, may perform better than Treasury Inflation Protected Securities.  Investments in bank loans may at times become difficult to value and highly illiquid; they are subject to credit risk such as nonpayment of principal or interest, and risks of bankruptcy and insolvency.

The S&P 500 Index is a product of S&P Dow Jones Indices LLC, a division of S&P Global, or its affiliates (“SPDJI”) and has been licensed for use by T. Rowe Price.  Standard & Poor’s® and S&P® are registered trademarks of Standard & Poor’s Financial Services LLC, a division of S&P Global (“S&P”); Dow Jones® is a registered trademark of Dow Jones Trademark Holdings LLC (“Dow Jones”). T. Rowe Price’s products are not sponsored, endorsed, sold or promoted by SPDJI, Dow Jones, S&P, their respective affiliates and none of such parties make any representation regarding the advisability of investing in such product(s) nor do they have any liability for any errors, omissions, or interruptions of the S&P 500 Index.

The views contained herein are those of the authors as of April 2022 and are subject to change without notice; these views may differ from those of other T. Rowe Price associates. 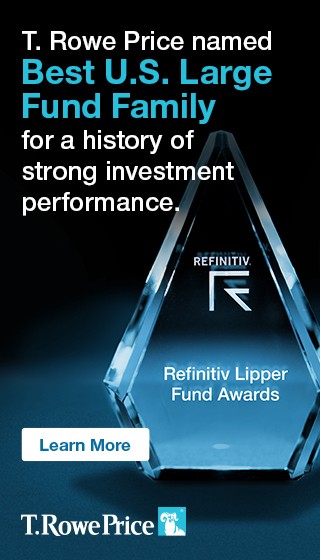