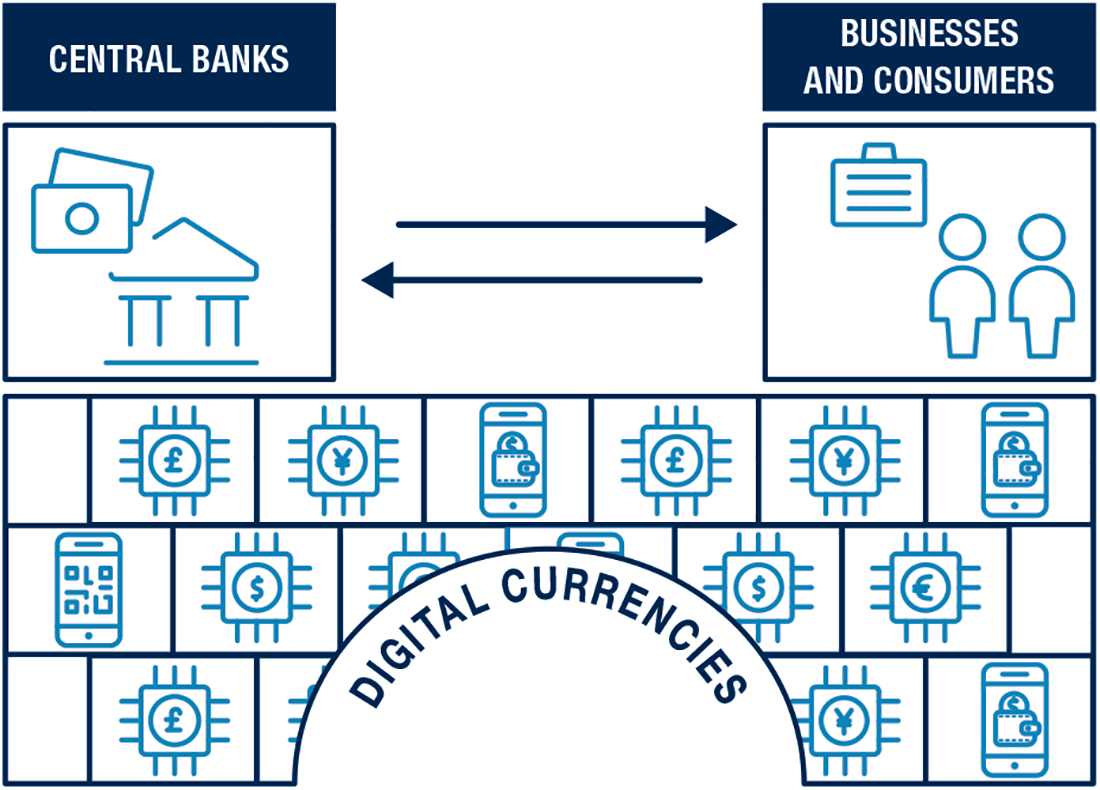 Developed Market Policy Rates* Are Near Their Lower Bounds

The introduction of CBDCs could change this by allowing central banks to stimulate economic activity in times of crisis by transferring funds directly into retail accounts on its balance sheet, akin to “helicopter money” (increasing the money supply by distributing large amounts of money to the public). This can be done by transferring a one‑off high interest rate payment on CBDC holdings. The recent issuance of stimulus checks by the U.S. government to individuals is similar in practice; however, it was only possible due to a unique cross‑party consensus, and its implementation suffered from delays due to operational challenges. The speed and efficiency benefits of digital currencies support an immediate transfer of funds from the central bank to CBDC retail accounts.

"...we believe the independent status of many central banks means they are better placed to respond quickly to economic shocks..."
— Tomasz Wieladek International Economist

Furthermore, we believe the independent status of many central banks means they are better placed to respond quickly to economic shocks and are less influenced by political pressure. Central banks can also dial back stimulus quickly if these new instruments lead to a significant inflation target overshoot. A further benefit of CBDCs is that central banks could also perform targeted transfers to help specific sectors of the economy during a crisis, for example, by transferring funds to CBDC accounts held by high‑contact services firms that have been negatively impacted by the coronavirus.

Printing and redistributing money via a central bank’s balance sheet is likely to be politically controversial, but there are at least three ways in which an independent central bank could transfer funds to account holders without creating new money: First, it could deposit seigniorage (the profit made by a government from issuing currency) straight into retail bank accounts held at the central bank; second, it could use the deposited digital currency to purchase positive‑yielding government debt and pass on part of the positive interest rate to deposit holders; and third, during times when the policy rate is negative, the bank could redistribute fees charged on commercial bank deposits to retail account holders. We estimate that the macroeconomic stimulus derived from these measures would be between 0.5% and 1.5% of gross domestic product,2 sufficient to counter small to medium‑sized recessions.

If commercial banks became less systemically important, they could lose the implicit backing of the state, which in turn would mean they would face a higher cost of debt and greater disciplinary pressure from investors, while financial markets would likely require banks to hold more equity against their assets. This should make individual banks more resilient to shocks to their income stream, such as being hit by negative rates on their reserve holdings at the central bank. This disintermediation process from banks to central banks would have to be slow and carefully managed to avoid unintended financial stability consequences. However, this is the likely direction of travel in our view, even if it takes years.

The arguments previously stated rest on the assumption that households and firms would be willing to hold CBDCs. Private banks would likely be able to offer a higher interest rate than CBDCs, not only out of necessity to attract deposits, but also as a reflection of their ability to make riskier (hence higher return) loans. Firms and individuals will therefore require an incentive to hold CBDCs. Given the safety of holding large amounts of funds at the central bank compared with the limited protection offered by deposit insurance schemes, firms would be strongly incentivized to choose the former option. For households, CBDCs would need to offer benefits that offset the disadvantage of lower interest rates, for example, greater security and lower transaction costs. In particular, many smaller retail businesses may only allow small transactions in CBDCs since the transaction may be uneconomical if the more expensive retail payment network is used.

To summarize, firms and households would likely accept a negative interest rate on CBDCs as long as there are some features that make them more convenient to use than regular bank accounts. The size of this “convenience yield” would ultimately determine by how much CBDCs can help to lower the reversal rate and hence the effective lower bound for policy rates.

Whatever policy avenues central banks pursue through CBDCs (and we have only scratched the surface in this article), it is clear that bond and currency market investors need to understand the changes to the depth and breadth of monetary policy that these new instruments will likely bring. With lower reversal rates, central banks could have greater credibility when discussing the prospect of reducing policy rates, which could have negative consequences for currencies. On the other hand, the ease of implementation of “helicopter money” may also mean that yield curves steepen earlier in the recession than in the past. Finally, permanently larger holdings of government bonds as the asset counterpart to CBDC liabilities will likely lower term premia, meaning that long‑term interest rates will likely be lower, all else equal. The implications for emerging market central banks are very different—and we will explore those in a forthcoming article.

1 “Term premium” refers to the greater expected return available on a long-term bond over a shorter-term bond.

The views contained herein are those of the authors as of July 2021 and are subject to change without notice; these views may differ from those of other T. Rowe Price associates.

Information contained herein is based upon sources we consider to be reliable; we do not, however, guarantee its accuracy. Actual future outcomes may differ materially from any estimates and forwarding-looking statements made.

Past performance is not a reliable indicator of future performance. All investments are subject to market risk, including the possible loss of principal. International investments can be riskier than U.S. investments due to the adverse effects of currency exchange rates, differences in market structure and liquidity, as well as specific country, regional, and economic developments. Fixed-income securities are subject to credit risk, liquidity risk, call risk, and interest-rate risk. As interest rates rise, bond prices generally fall. All charts and tables are shown for illustrative purposes only.

Subscribe to get email updates including article recommendations relating to fixed income.