Bitcoin’s meteoric rise in late 2017 put cryptocurrencies on the map. To many, its collapse by mid‑December 2018 put the cryptocurrency “craze” in its rightful failed place among other famous asset‑price bubbles that ultimately burst.

Yet, bitcoin and cryptocurrencies in general aren’t dead. They are evolving and, in our view, warrant the renewed attention they are now getting from analysts and investors.

While T. Rowe Price portfolio managers have not invested in Bitcoin to date, our investment professionals recognize that blockchain technology has the potential to disrupt companies and industries in which we do invest on behalf of our clients, including financial services, health care, and key technology areas, such as cloud computing and cybersecurity.

Beyond technology disruption, another reason for closely following the cryptocurrency evolution has to do with the currencies themselves. In a “deglobalizing” world driven by heightened geopolitical tensions, there is a growing demand for alternatives to the U.S. dollar.

Stocks and Bitcoin Rally as the Fed Pivots

Much has occurred since the end of 2018 in relation to bitcoin, cryptocurrencies, and more traditional alternatives to fiat currencies such as gold, as well as to U.S. equities. Before elaborating, it is first necessary to back up to the year 2015.

The Fed rate normalization efforts that began in 2015 were dramatic. Not only did the effective federal funds rate move from zero to the 2.4% range, but the Fed also shrank its balance sheet from USD 4.5 trillion to less than USD 4 trillion by the midpoint of 2019.

Beyond actual rate normalization, throughout the fall of 2018 many investors and analysts believed that the Fed would follow its rate hike of 25 basis points in December 2018 with four more similar rate rises in 2019.

...we think that cryptocurrencies and the blockchain technology driving them are a story that is just getting started.

The Rise, Fall, and Revival of Bitcoin
Crypotocurrencies have been in the public eye for a decade, but currency that is not backed by a physical commodity dates back to the 1970s. 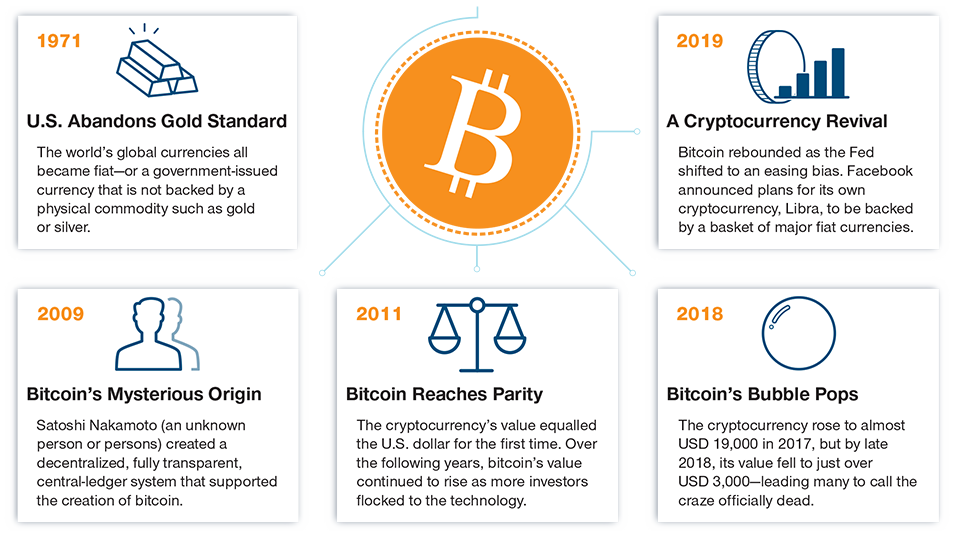 In aggregate, these moves, realized and anticipated, would have ranked among the Fed’s most restrictive policy regimes ever, and markets felt the pain.

As higher rate expectations boosted the appeal of traditional cash instruments, some bitcoin investors questioned the viability of cryptocurrencies. Bitcoin prices cratered along with U.S. stock prices as the S&P 500 Index dropped over 19% from September 20 through December 24, 2018.

Quietly, however, in late December, the Fed changed its bias and bitcoin and U.S. equities both found their respective bottoms. The prospect of a Fed pause helped the S&P 500 rally over 25% through April 30, 2019. Then, following a market relapse in May, the Fed communicated its intent to shift to an easing policy, driving the S&P 500 to record highs as the first half of 2019 ended (Figure 1).

Against the current economic fundamental backdrop, an accommodative Fed is unprecedented. Consumer confidence is high, inflation trends are benign, and unemployment is low. While U.S. real GDP growth is slowing, it is still expected to exceed 2% in 2019. Yet, in response to what it views as widespread economic uncertainty, it appears the Fed will be cutting interest rates. The question is by how much.

Outside of the U.S., a number of other central banks also have turned dovish in what increasingly looks like a race to the bottom for global fiat currencies. Global debt markets have responded powerfully, and the stock of negative‑yielding debt has reached a record level of almost USD 13 trillion (Figure 2).

In this atypical environment, it appears to be far more than a coincidence that bitcoin (as well as other cryptocurrencies) and gold also rallied powerfully in the first half of 2019.

Practical Use of Cryptocurrencies Is Accelerating

In its earliest days, it seemed as if bitcoin was only accessible to tech‑savvy individuals seeking to conduct commerce outside of the current global financial system. Coins could be earned (mined) by solving complex mathematical problems with an algorithm that had significant computer power behind it. Accumulated coins were housed in a bitcoin account, and those coins could be exchanged or traded outside of the conventional financial system with other individuals that also had a bitcoin account.

For individuals who entered this early ecosystem by buying bitcoins with conventional fiat currencies, such as the U.S. dollar, their experience was a bit like the insect who visited the pest hotel: They could check in, but they couldn’t check out.

Halfway through 2019, the perception of bitcoin as an “off the grid” instrument with limited conventional use is looking increasingly antiquated. A number of major companies, including Overstock, Microsoft, Amazon, and others, are now accepting bitcoin for commerce. We don’t think they will be the last. Meanwhile, use of bitcoin is becoming increasingly popular for online sports betting and other gambling sites.

This evolution has been greatly facilitated by the development of the cryptocurrency wallet, which stores the public and private keys needed to track individual ownership and record transactions in bitcoin and other digital currencies.

Cryptocurrency exchanges such as the San Francisco‑based Coinbase, which opened in 2012, have made it relatively easy to obtain a cryptocurrency wallet. A Coinbase wallet can be easily funded with fiat currencies, but then, importantly, the contents also can be converted back to fiat currency. ATM‑like fees are involved, but the process is quickly evolving.

Coinbase is also global. It can broker exchanges of Bitcoin, Bitcoin Cash, Ethereum, Ethereum Classic, and Litecoin with global fiat currencies as it operates in approximately 32 countries and also provides a platform that allows bitcoin transactions and storage in 190 countries.

Meanwhile, although a number of key global policymakers recently have spoken out against cryptocurrencies, wholesale institutional funding markets appear to be sending cryptocurrencies a more constructive message. As the Financial Times recently reported, the UK has authorized the first asset manager that specializes in cryptocurrencies, while in June 2019, Ledger X won approval from U.S. regulators to trade bitcoin derivatives that are settled in the digital currency.1

The revival of interest in cryptocurrencies has captured the attention of financial regulators and other policymakers worldwide. Fed Chairman Jerome Powell, U.S. President Donald Trump, and officials at the Bank of England all have acknowledged the prominence of cryptocurrencies in their public statements and tweets.

Facebook’s announcement in mid‑June that it intended to launch its own cryptocurrency, Libra, proved a particular lightning rod for regulators and politicians. While the strong critical reaction led Facebook to put a hold on Libra’s planned 2020 launch, the details of the proposed currency help explain why it triggered such a strong reaction:

With some two‑thirds of Facebook’s 2.3 billion users residing in the developing world and having limited access to traditional banking facilities, we think a stablecoin currency like Libra potentially could gain traction quickly as consumerism continues to take hold in fast‑growing emerging markets.

As Facebook’s David Marcus explained in June when discussing the rationale for Libra versus global fiat currencies, “It feels like it is time for a better system. This is something that could be a profound change for the entire world.”

Libra is an ambitious idea, and we believe Facebook has approached its development thoughtfully. The way Libra and its governance are structured make sense to us and ultimately should leave Facebook with no meaningful control over the cryptocurrency once it is launched. In addition, Libra’s documentation seems to strike an appropriate balance between data privacy concerns and working with regulators to construct a global payments vehicle with low friction (i.e., high speed and low fees).

However, given the many regulatory uncertainties surrounding Libra, T. Rowe Price currently does not include the cryptocurrency as part of the firm’s rationale for owning Facebook stock.

While Libra sounds extraordinarily promising in theory, there are high regulatory hurdles standing in its way—as evidenced by recent responses from policymakers.

The grievances voiced by global politicians may appear unreasonable to some observers. But from a realistic perspective, no one ever said that regulation has to be reasonable. Against this backdrop, despite its potential merits, Libra could present an even easier target for Facebook’s critics than the company’s existing services themselves.

Meanwhile, even if Libra were to get regulatory approval, Facebook and the Libra Association still would face significant logistical challenges related to getting the cryptocurrency into the digital pockets of the people in the developing world who would find it most useful.

Libra visibly represents the relentless evolution that is taking place in the cryptocurrency space. Although it appears policymakers may have the ability to slow down cryptocurrency evolution for developed world consumers, we believe that the process will continue and that Libra will not be the last stablecoin in this conversation. Meanwhile, and perhaps out of necessity, wholesale funding markets look to be moving faster on the digital currency front.

Based on their recent negative responses, it is obvious that cryptocurrencies have recaptured the attention of financial policymakers. They also should have ours.

Bloomberg Index Services Limited. BLOOMBERG® is a trademark and service mark of Bloomberg Finance L.P. and its affiliates (collectively “Bloomberg”). BARCLAYS® is a trademark and service mark of Barclays Bank Plc (collectively with its affiliates, “Barclays”), used under license. Bloomberg or Bloomberg’s licensors, including Barclays, own all proprietary rights in the Bloomberg Barclays Indices. Neither Bloomberg nor Barclays approves or endorses this material, or guarantees the accuracy or completeness of any information herein, or makes any warranty, express or implied, as to the results to be obtained therefrom and, to the maximum extent allowed by law, neither shall have any liability or responsibility for injury or damages arising in connection therewith.