China’s rapid pace of industrialisation and economic growth has been extraordinary over the past few decades, but its impact on the environment has also been well documented, with the country responsible for over 30% of global emissions today1.

Many remain sceptical of China’s commitment to change and to put the environment ahead of the economy. President Xi Jinping’s absence from COP26 only added more proverbial fuel to the fire from those who view China as increasingly isolated from coordinated global efforts to tackle climate change. During the summit, however, China and the US did announce plans to cooperate together to cut greenhouse gas emissions over the next decade. While this move will also have its doubters, for many it offered a strong signal to China’s direction of travel.

Despite his no-show, we believe it is fair to say that President Xi’s government has made environmental policy a top priority, which should also help him secure further economic and social goals. At the UN General Assembly in 2020, President Xi announced two significant environmental initiatives. First, to target peak carbon dioxide (CO2) emission levels by 2030. And second, to transition China towards carbon neutrality (net-zero CO2 emissions) by 2060. These goals will require unprecedented multi-year levels of commitment and investment from the Chinese government, its corporations and its people, and it will likely be a bumpy ride. But we are already seeing meaningful progress, and we believe that the associated regulatory and spending initiatives will open up significant opportunities for investors.

Work in progress, but a clear direction of travel

In order to meet President Xi’s ambitious goals, state and private enterprises are expected to pull their weight, with new regulation being rolled out rapidly. As investors we are already seeing some changes in corporate behaviour. For instance, the percentage of companies in the MSCI China All share index reporting carbon emissions has risen sharply to 43.7% (as at 30 June 2021), almost double what it was 12 months previously. This is a significant and rapid change.

It is true that standards of company disclosures can vary widely in China, and they can be particularly weak and patchy in some areas. Yet increasingly, many of the corporates we talk to are recognising the importance of being on the right side of change. These are entities that place stronger emphasis on improving their environmental standards and on being more transparent when communicating with investors. In addition, we believe that as the array and appetite of international investors continue to grow, so too will the level of disclosure and transparency.

While cycles of regulatory clampdowns relating to anticorruption and social equality have unnerved investors and weighed on markets in recent times, not all regulatory change in China has been negative. President Xi has clearly articulated his goal of carbon neutrality by 2060 and it is no surprise that policy is already shifting in this direction.

As Fig.1 highlights, China has been extremely busy in its efforts to transition to a greener economy over recent years – its positive momentum having been relatively unhindered by the pandemic. Chinese authorities have already announced plans to improve financial regulation that would incentivise the development of ‘green finance’ products, for example. And we’ve seen an acceleration in domestic renewable energy generation, most notably when it connected its largest solar power plant (and the world’s second largest in terms of generation capacity) to the grid in October 2020.

China’s per capita fossil fuel emissions are likely about to peak at just over 8 tonnes, significantly lower than some other global countries (comparable levels for the US are around 13 tonnes, for example, having reached a peak of over 20 tonnes). And with China responsible for around 30% of the world’s industrial output, its efforts to transition to a more sustainable economy should contribute meaningfully to global carbon reduction.

China aiming to be the leader in green energy

Indeed, China is taking the lead in the global transition away from carbon, producing 70% of the world’s solar panels, 50% of its electric vehicles, and one third of all wind turbines. China has also established a prominent position in the global supply chain for the raw materials essential to electrification, such as rare earth elements, cobalt, lithium, and copper.

In our view, China is well positioned to be a leader in renewables and green energy (Fig 3). It is estimated that China’s share of green investment will be equivalent to that of Europe and the US combined by 2050 (source: Credit Suisse). Historically, the country has been a major importer of traditional (i.e. non-green) energy. Yet, a policy shift towards a new ‘green’ agenda for renewable energy sources will enable China to become more self-sufficient (another priority for President Xi). 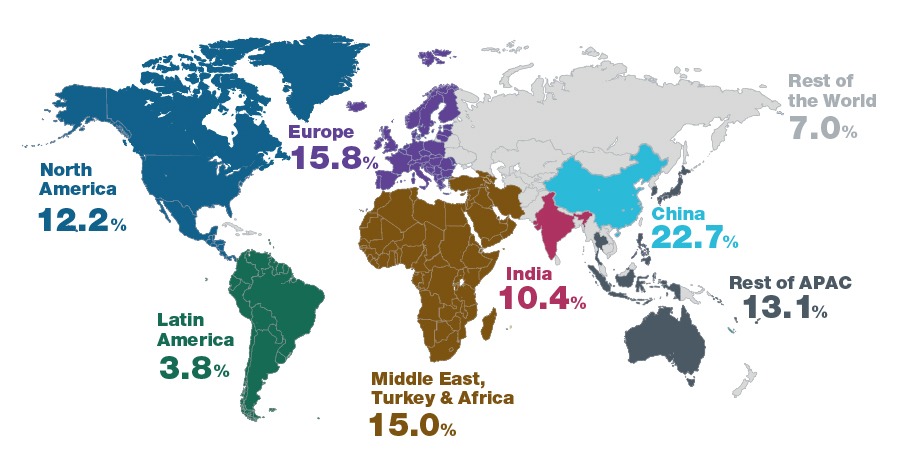 Wind and renewables are already playing a much larger part in energy consumption too. Again, importantly for Xi this will help serve two purposes, by not only allowing the government to meet an economic goal of becoming a global green energy leader and achieving self-sufficiency, but also at the same time advance a social goal by improving the living standards for Chinese people who have previously been subjected to high levels of pollution.

China’s energy consumption, as at 30 September 2021

China will need to spend to reach its targets

In order to meet its green transition goals, it is estimated that the Chinese government will need to pledge some US$16 trillion across a number of sectors (Fig. 5). That investment is estimated to be most significant between today and 2040. For bottom-up investors, this has the potential to create some very exciting opportunities to invest in multiple industries and companies. This will not be just about investing in renewable power or the next EV (electric vehicle) play, but it will mean carefully identifying bottom-up opportunities across the entire supply chain. Traditional sectors will be key to facilitating the green transition and are expected to be winners too.

Fig. 5: Cumulative investment across sectors to achieve Net Zero by 2060

In addition, the transition away from a carbon-intensive economy to a more sustainable economy offers a further tailwind to industrialisation. Government support is gradually shifting away from traditional sectors like oil and gas to modernised industrial and business services sectors. This includes differentiated solar industries and innovative businesses that can increase power efficiency, as well as those that can provide solutions which are aligned to government goals.

For investors, China’s transition to net zero will offer a potentially vast opportunity set. In our view, understanding renewable infrastructure and alternative fuel sources together with their supply chain is key. For example, solar energy is an area of significant growth, but we believe it’s necessary to focus on areas of less intense competition within the supply chain.

Given the scale and speed of change and the inefficiencies that present themselves in the market, we believe China remains a fertile ground for good stock selection.

Global Equities: Thoughts from a Value Investor
Next Article

See all article(s) by Irmak Surenkok...

Robert Secker is a portfolio specialist representing the firm’s Asian and Chinese equity strategies to institutional clients, consultants, and prospects in the Equity Division.

See all article(s) by Robert Secker...
RELATED FUND
SICAV
China Evolution Equity Fund
Class I
ISIN LU2187417469
An actively managed, style agnostic, index unconstrained portfolio investing in c. 40-80 names across A-shares, H-shares and US-listed Chinese stocks. We focus on areas of the market that may be overlooked by some investors, going beyond the top 100 largest companies in the China universe by market cap to identify future winners.
View More...
FACTSHEET

Mainstream indices are a poor reference point for investors in China

China is an economy and market that is constantly changing.