Opportunities Beyond The Macro and Political Headwinds

Over the past year, China’s growth slowdown, the commodity price weakness, and unexpected political developments have produced widely disparate economic performance across Southeast Asia. While T. Rowe Price has a positive long-term outlook for the region, our views are more guarded for select countries in the near term. We are very bullish about the Philippines and moderately positive on Indonesia and Thailand. We are less enthused about Malaysia, mostly because of a limited pool of potential investments. Investors will need to be careful as they navigate Southeast Asia, given how continued divergence in economic policies and local developments will affect each country’s growth outlook.

Since the 2008 global financial crisis, China’s fast-growing economy and accommodative U.S. monetary policy have driven strong growth across Southeast Asia. Now with China entering a slower-growth phase and the Federal Reserve poised to raise short-term interest rates sometime in 2015, Southeast Asia is grappling with many issues exposed by external factors.

Exports, the region’s traditional growth driver, have flagged amid falling demand from China and the drop in oil prices. Disinflation spurred by the commodities slump appears to be spreading, leading several central banks in Asia to cut interest rates this year. Currency volatility and investment outflows spurred by higher U.S. interest rates are big headwinds for the region, as evidenced by the emerging markets sell-off in 2013, when long-term U.S. rates climbed after the Fed said it might start tapering its monthly bond purchases.

Political uncertainty has complicated the growth outlook in many countries, making it harder to predict the direction of the economy and the pace of economic reform. Last May, Thailand’s army seized power after months of street protests in the country’s 12th coup since 1932. Months later, Indonesia swore in a reform-minded candidate as its new president.

The combination of China’s slowdown, commodities weakness, and unexpected political developments has produced widely disparate economic performance in Southeast Asia in the past year. The Philippines, a large exporter of human capital with a relatively stable government, reported its third straight year of economic growth above 6.0%. Conversely, Malaysia’s growth is expected to drop from last year’s pace as lower energy prices weigh on Asia’s biggest oil and gas exporter. We expect moderate but below-potential growth in Indonesia and Thailand, but their economies should pick up next year as infrastructure spending and other reforms come through. 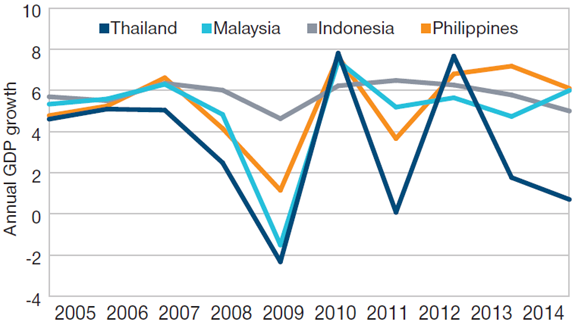 FIGURE 2: External Debt as % of GDP 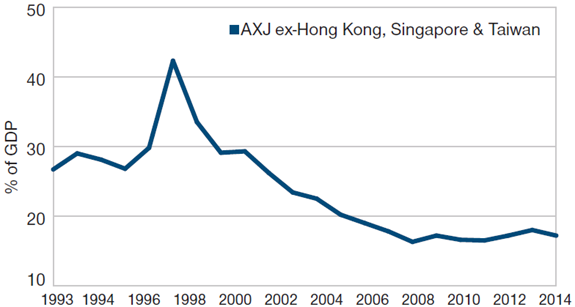 Our outlook for Southeast Asia is positive overall despite the macroeconomic challenges and volatile politics of the past year. Near-term growth should benefit from major infrastructure spending in most countries. Over the long term, rising domestic consumption and a growing middle class are powerful secular trends that should drive economic growth for many years to come. Finally, most Southeast Asian economies are fundamentally stronger than they were prior to the 1997 Asian financial crisis, with current account surpluses, much less foreign debt, and substantial foreign currency reserves.

Increased economic integration within the Association of Southeast Asian Nations (ASEAN) should be another catalyst for longer-term growth. For the past several years, governments in Southeast Asia have been working to create the ASEAN Economic Community (AEC), a eurozone-style trade bloc encompassing the ASEAN’s 10 member countries that aims to launch by the end of 2015. With a combined market of more than 600 million consumers and a collective GDP exceeding $2 trillion, the AEC represents a promising consumer market with the potential to become a crucial growth engine in the global economy over the long term.

FIGURE 3: External Vulnerability of EM Asia Has Improved Since 2013

PHILIPPINES: NO LONGER THE “SICK MAN OF ASIA”

The Philippines has undergone a remarkable turnaround in a few years. Until recently, the country was known as the “sick man of Asia” due to its widespread poverty and weak economy following decades of government corruption and mismanagement. Since the 2010 election of President Benigno Aquino III, however, investor perceptions have improved as President Aquino introduced a technocratic government and growth began to pick up.

Last year, the Philippines’ GDP expanded at a 6.1% pace, its third straight year of growth above 6%, making the Philippines the second-fastest growing Asian country after China. An increasing young population and expanding middle class have been the big growth drivers, but the Philippines has the added benefit of a large pool of overseas workers who send home their earnings—a huge remittance of capital that has contributed to a big current account surplus. Business processing outsourcing is another significant growth driver for the Philippines, which now rivals India in the global call center business.

Philippine stocks are a bit expensive, trading at 18 times 2015 earnings as of March 31, 2015. We believe that current valuations are supported by solid GDP growth—which we see exceeding 6% again this year—as well as strong earnings growth. Stable interest rates, tame inflation, and low oil prices should also support domestic consumption for the Philippines, a net oil importer.

Our overweight position to the Philippines has slightly increased over the past year in part because our holdings have appreciated. The country’s benchmark stock index has risen every year since 2009. Philippine companies tend to be large, family-controlled conglomerates with diversified businesses that face limited competition. Our positions are concentrated in financials and other consumption-driven names.

Indonesia’s economy has steadied since the summer of 2013, when a plummeting currency after the Fed’s first mention of tapering earned it a spot among the “fragile five” emerging markets most vulnerable to capital outflows. Since then, the cheaper rupiah, prudent monetary policy, and a renewed focus on the current account deficit have improved its economic imbalances. The domestic benchmark Jakarta Composite Index climbed 22% last year and rose to record levels in March, reflecting optimism in the country’s outlook.

Investor expectations for Indonesia surged after Joko Widodo, a former furniture exporter, was elected president last July. However, the economy has slowed since President Widodo took office in October. Indonesia’s GDP growth eased to 5.0% last year from a revised 5.6% in 2013 due to lower prices for oil and coal. We expect growth will slow further this year. Over time, the new government aims to make Indonesia’s economy less reliant on natural resources and more dependent on manufacturing. To accomplish this, the government has focused on infrastructure spending, improving the business environment, and attracting foreign investment in manufacturing and infrastructure projects.

We have a positive view of Indonesia, which has shown good progress on many fronts since its transition to democracy began in 1999. With roughly 252 million people, Indonesia is the world’s fourth most populous nation and the 10th largest economy in terms of purchasing power parity, according to the World Bank. The country has made huge strides in reducing poverty, more than halving its poverty rate since 1999 to roughly 11% in 2014, and has a large young population that will underpin consumption growth in the coming years.

Indonesia’s biggest negative is the politics, in our view. Widodo is an untested leader who faces stiff political opposition, and his ability to implement reforms remains to be seen. Currency risk is another headwind. Indonesian officials appear to want a gradually depreciating currency as they try to make the economy more focused on manufacturing. While a weaker rupiah benefits Indonesia’s competitiveness by making its exports cheaper overseas and imports more costly, it makes dollar-based returns on Indonesian assets less attractive.

We have gradually raised our Indonesia exposure to slightly overweight over the past year. Many Indonesian companies are state-owned and the opportunity set is limited. Our holdings are concentrated in a few banks that are well-managed and offer good exposure to rising domestic demand, as well as retail and other consumer discretionary names.

Thailand’s economy has long demonstrated an ability to bounce back from setbacks, but signs are emerging that it has lost some resilience in the latest political crisis. Thailand’s economy is expected to grow slightly more than 3.0% this year after edging up 0.7% in 2014, its slowest pace in three years. While not bad, several factors have restrained the recovery, such as overextended consumers, rural incomes under pressure from weaker commodities prices, tight fiscal policy, and stagnant exports. The pace of government spending—widely seen as the most important growth driver— has been disappointing since the May 2014 coup.

Thailand is one of the region’s biggest beneficiaries of lower oil prices, which should lead to a current account surplus. Consumers, however, will likely use the windfall from lower oil prices to reduce household debt, which grew strongly a few years ago as the previous government encouraged consumption. This year, the new military-led government announced an ambitious infrastructure program, which calls for spending the equivalent of 16% of Thailand’s 2014 GDP over the next eight years on infrastructure.

Our longer-term outlook for Thailand is tempered by several trends that weigh on its growth potential. Thailand has been losing competitiveness for the past decade due to a lack of business reforms, a shortage of skills sought by foreign investors, and an aging population. The continued political instability finally appears to be deterring foreign investors. The current political crisis—which boils down to controlling the succession to the country’s ailing king—is the worst Thailand has experienced since the 1970s. Its outcome is uncertain.

On the plus side, Thailand stands to benefit from growing economic integration. Its central location in Southeast Asia ensures that it will benefit from the free movement of capital, labor, and goods as the ASEAN economies become more economically intertwined.

We have maintained a modestly overweight allocation to Thailand over the past year. Despite this year’s expected growth pickup and Thailand’s vital role in the ASEAN’s growing economic integration longer term, we see it as a lower-growth country relative to other markets in the region. History has also shown that political uncertainty in Thailand can lead to many planned infrastructure projects being delayed or cancelled.

Until recently, Malaysia enjoyed decent growth, thanks to a resilient economy driven by oil and gas exports and solid domestic consumption. Malaysia’s GDP grew at an annual 6% rate last year compared with 4.7% in 2013. Falling energy prices, however, have reduced this year’s growth expectations to about 4.5%. The drop in natural gas prices is seen as costing nearly $10 billion in export revenue this year for Malaysia, the world’s second-largest exporter of natural gas. A new goods and services tax effective in April 2015 may curb consumer spending.

Malaysia has a healthy electronics sector and is a regional manufacturing hub, which should allow its economy to avoid an energy-induced crisis. The country runs a current account surplus, though the fall in energy revenue has caused the surplus to deteriorate.

Malaysia’s tendency to resort to controversial policies—such as imposing capital controls in 1998 during the Asian financial crisis and employing a national race-based affirmative action program—is a risk that investors need to be mindful of. Recent headlines about 1Malaysia Development Bhd, a state investment firm that is struggling to pay back creditors, highlight the pervasive corruption that has long held back Malaysia’s economy.

Economic and governance risks are the main reasons for our significant underweight to Malaysia. Despite having a vibrant consumer economy, the country has a limited opportunity set with relatively few steady-growth, consumer-driven companies open to foreign investors.

We have a positive outlook for Southeast Asia overall despite the macroeconomic challenges and volatile politics over the past year. Governments in Thailand, Indonesia, and the Philippines have recently announced plans to spend billions of dollars on new infrastructure in the next few years to spur growth as the traditional export-driven model loses steam, though the pace of those projects has so far been disappointing.

We are encouraged that most Southeast Asian economies are stronger and more resilient than they were less than two decades ago as they worked to repair the damage from the 1997–1998 Asian financial crisis. Since that tumultuous period, the investment climate in Southeast Asia has benefited from a relatively stable 500 Internal Server Error

Cannot serve request to /content/tpd/it/it/thinking/articles/2015/q2/opportunities-beyond-the-macro-and-political-headwinds.html on this server