Read Nick’s monthly column to get the latest perspectives on what we are seeing on the ground in Asia, with observations from the team’s travels around the region.

Within Asia, Korea (1.76%) and India (0.46%) managed positive returns for the month. Korea was aided by strong performance from the auto sector where weaker FX is being seen as a positive catalyst. India benefitted from a surprise 50bps rate cut by the Reserve Bank of India (RBI) on 29 September, the currency appreciated against the dollar and IT services and Financials were especially strong performers. Indonesia was the weakest market in Asia in September (-13.12%), hindered by a 3.7% depreciation of the rupiah.

Several members of the team were in India in September meeting companies covering a broad range of sectors. There was also a side trip across the large southern Indian state of Tamil Nadu, a follow-up to the trip across northern Indian states earlier in 2015 (see February’s Asian Diary notes). Our broad take-away on the macro situation was that things are slowly moving in the right direction, although without a major pick-up as no major reforms have happened yet. We continue to hear that the private sector is reluctant to invest in infrastructure, and changing this will be important for India’s success over time.

On a more positive note, it is becoming apparent that individual states in India are playing an increasingly important role in development. Road and rail construction is picking up in several states. Our visit to Tamil Nadu confirmed this trend, with some of the best roads to be found in India, even in the villages. The first photo below is a main highway, second is a road through a village with miles of smart tarmac – compare them to the muddy scenes in Uttar Pradesh from our February diary, in the third photo (all photos source T. Rowe Price).

Tamil Nadu is also an example of a state that has encouraged foreign direct investment and improved the ease of doing business. Industrialisation has had a powerful trickle-down effect into the economy. Part of Prime Minister Modi’s ‘Make in India’ campaign is to encourage more states to follow this model. We heard that wages at these factories were growing significantly – not so good for the companies but great for consumption over time. Below is a photo of the Hyundai Mobis factory (source: T. Rowe Price). It is one of their top three global supply centres for auto parts and now sources 70% of its product from local vendors1. 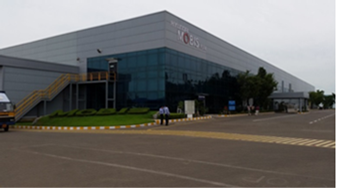 We remain optimistic on the longer term outlook for India. Progress on reform has been slow, but change is happening. Near term, the economy should gradually improve. Our main concern remains that India is a huge consensus overweight. We have not yet seen any improvement in earnings growth, and valuations remain at elevated levels relative to the rest of the region. That makes the market susceptible to disappointment, which tempers our enthusiasm.