Time flies, especially when markets are busy and noisy, and markets have been both in recent months, with the MSCI AC World Index up 8.7% (in USD terms) in the 100 days following the shock result of the US Presidential election (November 6th to February 17th)1. While the magnitude of the rally is garnering much attention with many major indices hitting all-time highs against a backdrop of collapsing volatility, the composition and shape of the rally is in many respects the most interesting dimension to analyse.

While generally perceived as a negative pre-election, Donald Trump’s victory, backed by a Republican majority in the House and Senate, quickly created a very different and very positive narrative; more growth-oriented US policy, constituting both tax cuts and infrastructure spending, as well as de-regulation aimed at spurring corporate investment by creating new incentives for corporate America. This led to renewed hope that after years of stagnation we might be on the cusp of a durable improvement in both US and global growth trends. In a world of higher growth, inflation and interest rates expectations, the reaction of the market was somewhat intuitive. Buy cyclicals, sell defensives, buy value, sell growth.

The anatomy of the Trump-inspired market movement can be seen in granular form in Figure 1 with the market rally initially being led by (among others), Japan, Financials, Energy, Copper and Russia. The cyclical nature of the initial rally reveals much about the market’s changing expectations around growth and inflation and the manner in which the market has followed the narrative that de-regulation and stimulus can bring back the economic animal spirits of old. In contrast, risk-aversion proxy gold, together with countries and regions in the firing line of Donald Trump’s anti-globalisation and immigration rhetoric; Mexico, China and Asia initially took the brunt of the sell-off. Healthcare also joined the list of losers upon expectations of a repeal of significant parts of the Affordable Care Act.

Although markets overall have continued to rally in aggregate in 2017, it is interesting to note that there has been somewhat of a rotation, even within the first 100 days following the election result. As shown in Figure 1, emerging markets that were initially in the firing line of a “taper tantrum II” have reversed their losses (with the exception of Mexico) following a strong start to 2017. Gold, healthcare and ‘Growth versus Value’ are also performing well in absolute and relative terms. In addition, while financials and copper (and materials more broadly) have followed on from their late 2016 strength, the uniform strength of cyclicals has somewhat faded with energy pulling back and Japan pausing after a period of significant strength.


Figure 1: The Two Halves of the Trump Rally 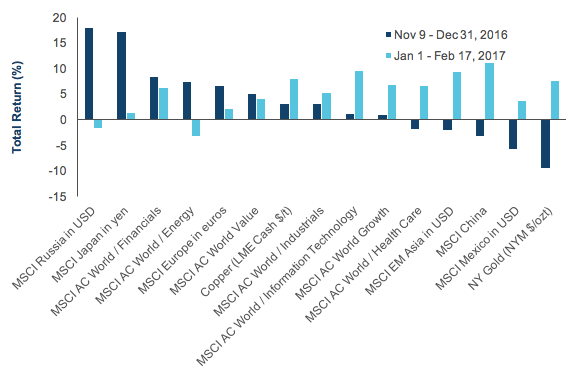 Though still too early to pass judgement, it does appear that after the initial frenzy, the sifting exercise has begun. We have observed a more granular narrative in the market in recent weeks, including which companies may benefit from tax reform and which companies may be facing earnings impairment from the very same policy. In tandem, the force of expectation around earnings uplifts to sectors and industries via potential fiscal spending has become more balanced. This is intuitive to us at least, given the hurdles to passing such policy, given in turn the Republican’s fiscally conservative history. Add in a consideration of the magnitude, duration and earnings impact of implementing fiscal stimulus and the story may be less exciting than the reality. To this point and given the need to make an impact and show some substance behind the make ‘America Great Again’ banner, an astute leadership may lead with policy that can be implemented with both speed and headline impact. Here de-regulation and tax reform seem more likely than fiscal spending, in the near term at least.

Only time will tell if the “Trump rally” continues, and what underlying shape it will take. However, earnings season has been a timely reminder of the difference between rhetoric and reality, and the need to see earnings improvement follow-through from sentiment improvement. Since the earnings impact resulting from any US economic policy change is largely a 2018 onwards consideration, it is worth noting that global economic indicators were improving independently both before and after the US election. This has raised consensus earnings expectations and now even delivered some improvement as seen via a better US earnings season versus previous quarters. 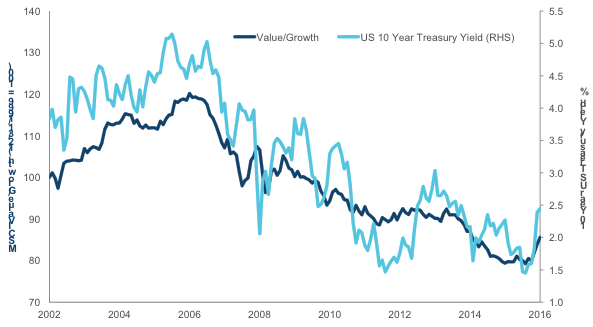 Sentiment shifts remain palpable, but this earnings season has partly underscored the strength of returns in the technology and financials sectors where earnings are showing material and broad-based strength. In contrast, weakness in earnings has somewhat put the brake on the energy and industrials rally, where earnings have continued to fall, capping off a tough 2016 for the commodity and industrials complex, at least in profitability terms.

Stepping back to the global growth and inflation question, consensus remains dispersed, albeit expectations have risen on both dimensions as reflected in the upward shift in US government bond yields (Figure 2), which has pulled up Value oriented indices in tandem, after a precipitous decade long decline. Putting aside the almost inevitable resurgence of concerns around US and European politics in 2017, the big question now is how long will this period of pent up improvement in economic and earnings data last that is independent of Donald Trump, and has it largely been priced into stocks? A second question is whether any policy-inspired improvement will drop through to global growth, and ultimately, a durable upturn in the corporate profits growth cycle?

The evolution of the Trump rally into 2017 indicates that, near term at least, some dispersion and differentiation around earnings and valuation fundamentals is reasserting itself after an initial wave of repositioning into cyclicals. While this change in tone may halt the upward momentum of markets in the near term, if such a scenario evolves, we would advocate careful contrarianism, given any reemergence of volatility will provide valuable opportunities to upgrade portfolios. Regardless, the return to fundamentals makes some sense following a year in which the market gravitated from macro-driven deep despair in early 2016, to potential complacency as the year finished on a high of politically-inspired macroeconomic policy optimism. Ultimately, while the evolving patterns of economic growth, inflation and interest rates will remain a source of intense focus and debate, 2017 will be defined equally, if not more, by earnings delivery (or the lack of it) as reality continues to meet rhetoric.

Previous Article
The team have got off to a whirlwind start so far in terms of travel, with Taiwan, China, Mexico, Egypt and Poland ticked off in the last few weeks.
Next Article
While more growth is often seen as a universal positive and is at the core of the Trump administration’s policy rhetoric, inflation is not a clear cut positive.
David J. Eiswert
Portfolio Manager
David Eiswert is a portfolio manager and analyst in the U.S. Equity Division. He is the portfolio manager for the Global Focused Growth Equity Strategy. As an analyst, he covers communications equipment.

See all article(s) by David J. Eiswert...
BLOG
Could Inflation End The US Equity Cycle?

While more growth is often seen as a universal positive and is at the core of the Trump administration’s policy rhetoric, inflation is not a clear cut positive. Read More ...
The Cyclical Rally: Why It's Time To Be Carefully Contrarian

Download Cancel
There were no documents available for the date you selected.
Data as of 31-Dec-19