Sign in to manage subscriptions for funds, thinking and email updates.

Please open the email and click on the activation link to access our full range of funds and views from our experts.

Funds Thinking
Thank you for providing your registration details.

Registration incomplete.
Please reference the email we sent you and click the link to confirm. If you don't see an email, please check your spam folder or request another email.
We need to confirm your email.
We've been unable to send a confirmation through to the email address provided. Please kindly confirm your email address to complete your subscription and start receiving email updates.
OK

You are ready to start subscribing.

Funds Thinking
Registration incomplete.
Please reference the email we sent you and click the link to confirm. If you don't see an email, please check your spam folder or request another email.
We need to confirm your email.
We've been unable to send a confirmation through to the email address provided. Please kindly confirm your email address to complete your subscription and start receiving email updates.

Please open the email and click on the activation link to access our full range of funds and views from our experts.

Rwanda will always be associated with Africa’s largest genocide in modern times. In 1994, an estimated 800,000 Rwandans were killed in the space of 100 days, and millions more were displaced. The country’s institutions, systems of government, and trust among its people were destroyed.

Very few expected Rwanda to be able to leave behind the ethnic divisions that caused the genocide and to successfully embark on a process of post‑conflict nation building. However, a remarkable transformation is underway. Rwandans are increasingly united, and progress has been made in rebuilding trust in the country’s leadership, while the economy is improving across a range of metrics.

We witnessed this transformation firsthand on our recent research trip to the country.

Rapid economic growth has been Rwanda’s overarching development goal. With this vision, Rwanda has aligned itself with the successful east Asian economies that began their development journey with a similar quest for high growth. In the decades after the genocide, Rwanda has achieved its place among the world’s fastest‑growing economies—and has seen a three‑and‑a‑half‑fold increase in per capita income1 for its population of 12.3 million since 1994.1 Moreover, growth has been broadly inclusive, and extensive investment in social safety nets has reduced poverty significantly.

Future aspirations in this regard have been set extremely high—specifically, reaching upper‑middle‑income status by 2035.1 Any future high‑growth strategy will require a multi‑sectoral approach, and services and industry now account for about half of all economic activity. Rwanda’s gross domestic product (GDP) growth is expected to remain around 8% in 20192, supported by public investment spending, private investment, and interventions aimed at promoting diversified and higher value‑added economic activity.2

Current Conditions in Rwanda
Improvement across a range of metrics
As of October 31, 2019

Improvement on a Broader Range of Metrics

Metrics other than just GDP growth can also be used to demonstrate Rwanda’s rapid progress. The country has the highest share of women in the lower house of Parliament globally. Inbound tourism is boosting the economy and having a trickle‑down effect on other areas of activity, such as the supply of fruit. Steps in transforming into a knowledge‑led service economy are aided by the fact that most Rwandans are bilingual, speaking English and French, and that there is good connectivity stemming from the high penetration of 4G networks.

Companies like Bank of Kigali are benefiting from favorable growth dynamics and the trend toward increasing digitalization.

Rwanda’s banking sector has been shaped by new innovations such as electronic payment technologies. Mobile phone penetration is high at around 90% of the population, and there is good interoperability in retail payment systems. Against this backdrop, Rwanda’s central bank has stipulated action to strengthen oversight of the financial technology sector while encouraging innovation. This has included signing memorandums of understanding with domestic telecommunications regulators.

Bank of Kigali—Expanding in the Digital Space

During our recent research trip, we met with the management of Bank of Kigali, a leading bank in Rwanda. Rare for an African bank, Bank of Kigali has both a female chief executive officer and chief financial officer. While being a top player, Bank of Kigali does face competitive pressures—notably from the merger of Banque Populaire du Rwanda (BPR) and Equity Bank, which, as a joint entity, will have a 25% market share.

Bank of Kigali has made progress with digital projects. The bank launched digital wallets three and a half years ago and already registered 170,000 people of a total of 300,000 clients. The bank has been targeting farmers in particular, as well as seeking to attract people not yet reliant on banking services. It is also building systems internally to ensure it has ownership of all aspects of the client journey.

Bank of Kigali also has the most sizable market share in point‑of‑sale systems, which allow customers to make payments for products or services at stores. It has also showed promise in the mobile payments sphere but needs to recruit more merchants to transact via phones and QR codes (machine‑readable optical labels that contain information about the items to which they’re attached). The bank’s approach has been to offer payment services and then help with working capital facilities, essentially bundling their offerings. The approach has worked well in schools, where Bank of Kigali offers systems to manage payments and ensure that fee tranches are paid on time.

The bank has an impressive loan book, with several deals in the pipeline. These involve Maraphone, a smartphone manufacturer owned by the pan‑African conglomerate Mara Group; a manufacturing facility for edible oil; and the extension of a cement plant. There is very limited competition in the corporate sphere, although this may change with the BPR/Equity Bank merger.

Growing Optimism in the Future

Rwanda has taken great strides to leave behind the socioeconomic traumas of the past. After the 1994 genocide, the country’s GDP collapsed, falling by half from an already low base, while life expectancy at birth for Rwandans was the lowest in the world. Today, on a platform of strong economic growth, the focus of authorities is on providing productive economic opportunities and higher‑quality living standards to all Rwandan citizens. Companies like Bank of Kigali are benefiting from favorable growth dynamics and the trend toward increasing digitalization. We believe that, over time, we may be able to uncover attractive investment opportunities in rapidly developing Rwanda.

As Rwanda continues to transition toward higher‑middle‑income status, we anticipate that industry competitive pressures will increase. This is particularly the case in banking, where there have been new entrants at roughly the rate of one a year in the past decade. There is vast scope for growth; however, more than 75% of the Rwandan population earn their living directly or indirectly through the agricultural sector, and formal financing is less than 2%.

See all article(s) by Iona Dent...
Frontier Markets: Notes From The Road 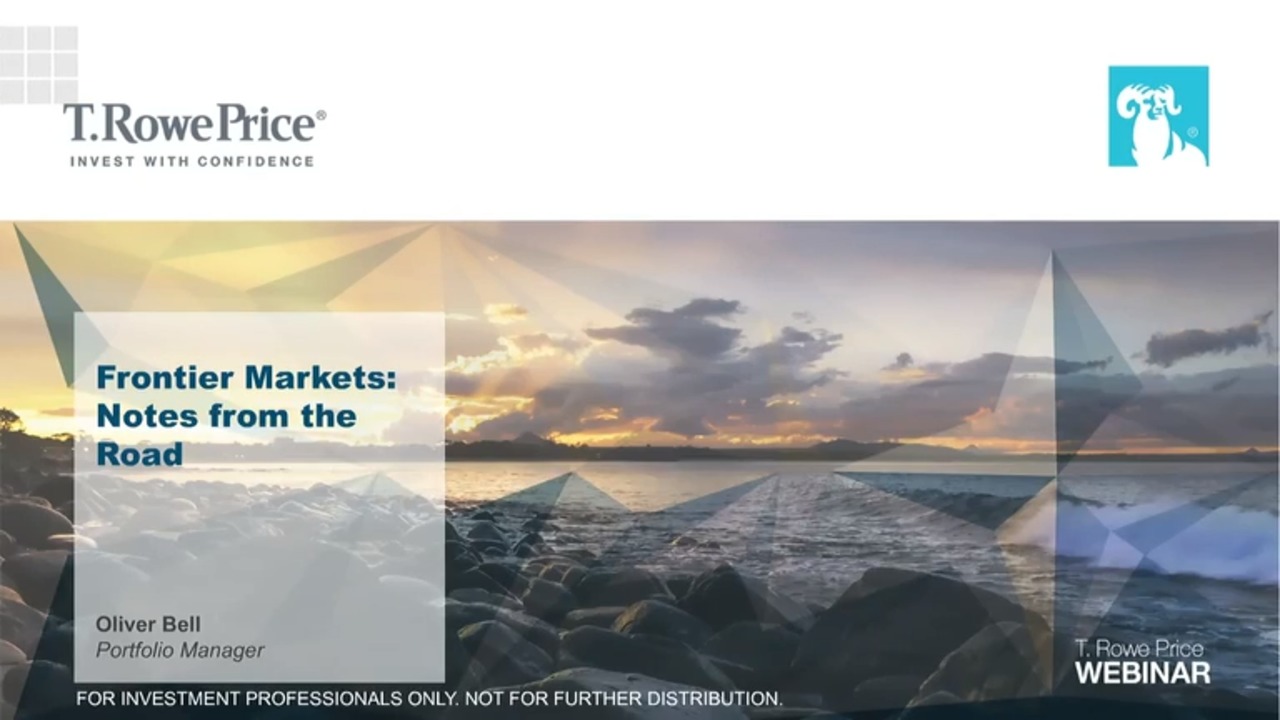 Oliver Bell , Portfolio Manager
INVESTMENT VIEWPOINT
Spotlight on Bangladesh, Myanmar, and Vietnam Read More...
May 2019
Notes From The Road
Get the inside track on Frontier Markets
VIEW