The year 2019 has been a remarkable one for Australian equities. In fact, it has been the best year for the asset class since 2009, with the S&P ASX 200 delivering 26.1% in local currency terms up to November 30. This is a much stronger return than we expected at the start of the year, and is also despite earnings growth trending downwards over the year from around 5-6% to 2% currently. This impressive return despite deteriorating economic conditions shows that the market has rerated, supported by two key factors: the global easing of monetary policy, with interest rates being cut by central banks around the world, including the RBA and the US Fed, and reduced tail risks from the trade war after China and the U.S. agreed to resume talks in June.

Against this backdrop we have also seen valuations stretched, particularly compared to history. The one year forward PE multiple for the ASX is around 17 times earnings, a 15% premium to the 20-year average. If you look at the industrial sector and exclude the miners and banks, the market looks even more expensive. The forward multiple for the industrial and consumer part of the market is a lofty 24 times projected earnings, close to a 40% premium. Only the mining sector is trading today at a slight 5% discount to its 20-year average valuation. High growth sectors like technology and healthcare have re-rated the most, with some of the industrial stocks joining in more recently.

Looking out to 2020, the good news is that we believe the domestic economy will improve from where we currently sit. And while investors shouldn’t be expecting equity market returns similar to 2019, and the economy is only growing around 1.7% year-on-year, Q3 2019, the lowest rate since the GFC, we think a number of significant factors will help support a solid year ahead for returns.

Firstly, the Reserve Bank of Australia (RBA) kept its powder dry until the conclusion of the Federal election in May. It then responded decisively to the weakening domestic economy by cutting interest rates three times, pushing the official cash rate down to a record low of 0.75% in October. Our expectation is that there will be one more 25 basis point rate cut from the RBA, with 50 basis points likely to be the effective floor for the cash rate.

While there are still a number of external risks and uncertainties, the backdrop for the global economy looks brighter in 2020 than last year.

We expect an improvement in global growth and trade. This view is partly based on an expected trade war truce between the U.S. and China, but also on a positive inventory restocking cycle which appears to be emerging. We are already seeing PMI indices in a number of countries starting to improve. While there are still a number of external risks and uncertainties, the backdrop for the global economy looks brighter in 2020 than last year.

We believe the RBA does not want to see a strong Australian dollar (AUD). This is because Australia’s major commodity exports such as iron ore and coal are priced in US dollars and a lower Australian dollar would also support domestic growth as well as putting upward pressure on inflation. While a stronger global economy would support the AUD we do not expect a dramatic currency move and a reasonable trading range for the USD/AUD in 2020 might be 65 to 75.

There are already signs that RBA rate cuts are starting to gain traction and stimulate the economy. The benefit of lower interest rates is most visible in Australia’s housing sector, which had until recently been in mild recession.

Putting It on the House

There are already signs that RBA rate cuts are starting to gain traction and stimulate the economy. The benefit of lower interest rates is most visible in Australia’s housing sector, which had until recently been in mild recession. Auction clearance rates in Sydney and Melbourne have nearly doubled, while home prices have risen by 5 to 10 per cent, depending on which region.

Australia’s housing correction has turned out to have been a mild one.  While house prices in Australia still look expensive versus history and the household sector still appears to be highly leveraged, mortgage rates are at record lows. Besides residential investment, a recovery in housing is also important for the outlook for consumer spending. There tends to be a strong wealth effect in Australia from residential property to consumer demand, operating with a lag of about six to twelve months. As long as the improving trends in housing continue, we should start to see a positive impact on consumer spending by the middle of 2020.

Besides rate cuts from the RBA, we also expect to see a more expansionary fiscal policy from the government that will support growth in 2020. We have already seen tax rebates in July and a A$4 billion infrastructure package announced in November.  We expect more to come, since Australia has strong public sector finances which allows the Coalition government to do more to support a sluggish economy.

We believe there is greater political advantage for the government from fiscal easing than from maintaining a conservative stance in order to post a large public sector financial surplus in FY19/20. The government surplus in FY19/20 on current budget projections could be as much as A$10-15 billion, thanks in part to a budget assumption for the price of iron ore that now looks far too conservative. Additionally, the weaker AUD will further support budget tax receipts.

We see a stronger economy as benefiting some domestic cyclical stocks such as retailers that have been out of favor with investors. This is one area where our investment views are somewhat contrarian. We see the retail sector as being well-positioned to benefit from any additional economic strength, and there are already early signs that the better quality domestic discretionary and home improvement retailers are already benefiting from this dynamic. A more positive view relative to our peers on Australian domestic cyclicals is reflected in our holdings of stocks such as JB HiFi and Wesfarmers 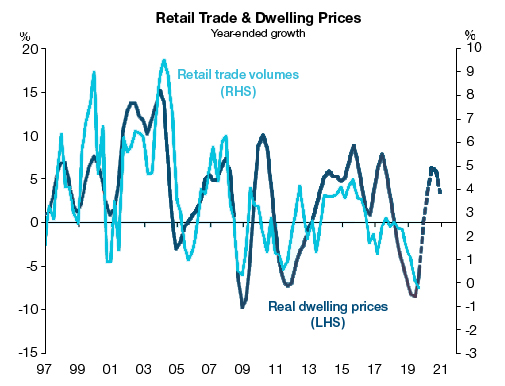 Housing and building materials stocks are likely to play a game of catch-up, but it will take time. Although building approvals continue to decline, there are signs they are stabilizing, albeit there will likely be a lag of 12 to 18 months before residential housing activity begins to rise in a material way. We believe companies that service the housing sector and which are exposed to improving transaction levels as opposed to construction activity, such as REA, should benefit earlier.  Elsewhere, we think investors should be more cautious towards health care stocks after the sector outperformed so strongly in 2019. From having been a big overweight earlier in 2019 we are now underweight the sector with valuations pushing to all time highs for many stocks. We stay positive on our holdings leveraged to areas of strength in the global economy, such as James Hardie (U.S. housing market), Treasury Wines (China consumer) and Aristocrat (US slot market).

Overall, we expect the Australian share market to deliver solid total returns next year. With the dividend yield for the ASX 200 around four percent, total returns of 6 to 8 percent for 2020 seem reasonable. Supporting a positive outlook, we think investors may become less risk averse if US-China trade discussions reach a positive conclusion and the domestic economy strengthens, which should help equity markets in 2020.

Besides rate cuts from the RBA, we also expect to see a more expansionary fiscal policy from the government that will support growth in 2020. We have already seen tax rebates in July and a A$4 billion infrastructure package announced in November.  We expect more to come, since Australia has strong public sector finances which allows the Coalition government to do more to support a sluggish economy.

Bloomberg Index Services Limited. BLOOMBERG® is a trademark and service mark of Bloomberg Finance L.P. and its affiliates (collectively “Bloomberg”). BARCLAYS® is a trademark and service mark of Barclays Bank Plc (collectively with its affiliates, “Barclays”), used under license. Bloomberg or Bloomberg’s licensors, including Barclays, own all proprietary rights in the Bloomberg Barclays Indices. Neither Bloomberg nor Barclays approves or endorses this material, or guarantees the accuracy or completeness of any information herein, or makes any warranty, express or implied, as to the results to be obtained therefrom and, to the maximum extent allowed by law, neither shall have any liability or responsibility for injury or damages arising in connection therewith.


Download Cancel
There were no documents available for the date you selected.
Data as of 31-Jan-20