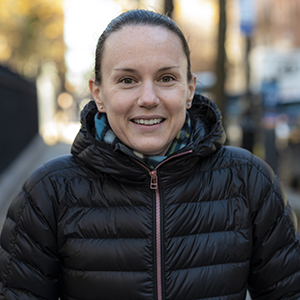 "I looked at T. Rowe Price because I wanted to marry my finance and technology backgrounds, but what really solidified it for me was seeing that there was a real focus on investment in tech and data, in strategically building systems that would be long-lasting and pay dividends in the future instead of just fixing things when they break."

With a background in tech and finance, senior data scientist Phillippa Thomson saw T. Rowe Price as the perfect place to combine her two career interests. Then, as early as her first interview there, she realized the firm had a different vision than most other companies.

“Typically there's always a large portion of an interview that focuses on your experiences and skills,” Phillippa says. For example, prospective hires are often expected to recall and explain the tasks they've performed at previous jobs. “In many places, that's the majority of the interview. But in my interview at T. Rowe Price, it was less than a quarter of it," she explains.

Instead, at T. Rowe Price, Phillippa was asked about her thoughts on office culture and her creative progression. “The interview sought details on how I think in terms of data science and tech, but also how I think culturally," she says. “There was a big focus on being a good cultural fit as well as gauging my mental agility and flexibility."

Phillippa sees a similar tone reflected in how she and her peers approach their work projects. “There's less focus on what you already know and more focus on how quickly can you learn new things, how willing you are to learn new things, and who's able to teach you new things," she explains. “It's less skills-focused and more about potential— both professional and cultural."

She also noticed the unique work culture at the firm, particularly for those interested in charting new frontiers in technology. The sincere focus on investment in tech and data science particularly impressed her. “The goal is not just to patch existing systems or apply band-aids where things are broken,” Phillippa says. “Instead, we're trying to strategically build systems that will be long-lasting and useful.”

The entire team recognizes that an investment in technology now will pay dividends in the future. “That's not an approach you find everywhere,” she explains. “Most companies only spend resources on technology when systems break down."

Since coming on board, Phillippa has witnessed how those at the firm are incredibly receptive to changing course if they realize they're not going down the right path. “Typically we have projects that are spec'd out for months if not years. And there's a real danger that once you've done all the work of outlining the project and the plan that you'll stick to it no matter what," she says. But that's not the case at T. Rowe Price, where people are open to the idea of changing course when necessary, even when there's a sunk cost associated with it. Phillippa says, “There's no investment in hanging onto things if that's not the right way to go.”

That kind of agility and focus on innovation and diversity of thought is linked to the fact that her peers at the firm come from a variety of backgrounds. “When we're looking at a new technology we want to roll out or a problem we're trying to solve, we benefit from the input of people with disparate experiences,” Phillippa explains. “It's a mistake to assume that if you bring a group of similar, like-minded people to a room together to solve a problem that they're going to come up with the best solution.” She wholeheartedly believes that gathering opinions from employees of diverse backgrounds for every decision, project, and question will ensure the best outcome.

As a woman working in technology, Phillippa also brings a special perspective to a field that is still dominated by men. “I believe that's going to correct itself over time,” she says. “I would say that I don't think I've worked anywhere where I've felt less-different because I'm a woman. The fact that I'm a woman is incidental in everyday interactions. That's not true of every place where I've worked."