The Actual Experience of New Retirees, the Generation Experiencing an Increasing Reliance on Defined Contribution Plans, is More Positive than that Expected by Workers Nearing Retirement 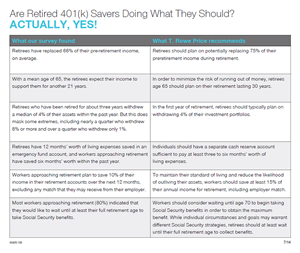 A new survey on retirement spending by T. Rowe Price revealed that many recent retirees who have 401(k)s and/or rollover IRAs have accumulated significant nest eggs, and most say they are faring well, both financially and emotionally. Meanwhile, workers in their 50s who are participating in an employer 401(k) have also accumulated significant assets, but feel more anxious about retirement than those who have already retired.

To learn about the current landscape and help 401(k) plan sponsors and participants, the survey focused on a unique population: new retirees who have 401(k) account balances or rollover IRAs and workers age 50 and older who are 401(k) participants. The survey is based on a national sample of 1,507 retirees who have been in retirement for one to five years and have a rollover IRA or an account balance in their 401(k) plan. It also includes a second sample of 1,030 workers, age 50 and older, who are currently contributing to a 401(k) plan or are eligible to contribute and have a balance of at least $1,000.

Findings among workers age 50 and older:

Aimee DeCamillo, head of T. Rowe Price Retirement Plan Services, Inc.
"For workers approaching retirement, we know there is anxiety and uncertainty as they look ahead and think they can't possibly be prepared for retirement. But this study demonstrates that you can do it. Many people are successfully saving in the private retirement system, and they report that post transition, they are fine. We have an opportunity to share these positive stories with 401(k) savers. We also need to emphasize the important role Social Security plays as the foundation of retirement income for most American households and the strategic advantages of delaying Social Security benefits."

Anne Coveney, senior manager of Thought Leadership at T. Rowe Price
"While we know there are people with little or no retirement savings, our survey suggests that many who participated in a 401(k) are entering retirement with considerable assets. And new retirees are flexible with their spending and report high satisfaction with their retirement so far."

About the survey
This research is based on online interviews with workers and retirees. This includes 1,030 working adults age 50 or over who are currently contributing to a 401(k) plan or are eligible to contribute and have a balance with their current employer of $1,000 or more. Retirees are represented by 1,507 adults who have retired in the past one to five years and who have a rollover IRA or an account balance in a 401(k) plan. Interviewing was conducted during February 19 - March 3, 2014. Findings in both samples are subject to a margin of error of just under 3%.