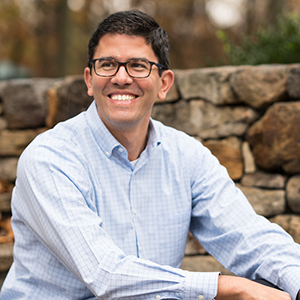 "As a financial firm, T. Rowe Price has done a great job of recruiting and developing attorneys who are at all stages of their career. But for me, because I was early in my career, the support structure brought an eagerness to learn and gave me the advantage of developing a holistic understanding of the business because I was immersed in it at the onset."

When Nicolas Lombo joined T. Rowe Price, he was just two years out of law school. "I like to say I was a 'baby lawyer,'" he jokes. Although he was just starting his legal career, Nicolas believes being closer to the starting line instead of at the finish was an asset. "Being at an early stage of my career meant I had a true eagerness to learn," he recalls.

He believes T. Rowe Price is astute for recruiting those who are at any stage of their careers or even straight out of law school because there's an advantage to using attorneys who can grow with the business. "When you're dealing with a law firm, they give advice, and then they disappear," he explains. "Six months later, something else may happen, and they come back, but they don't know what's going on."

In contrast, the in-house counsel at T. Rowe Price has grown in years and experience with the firm. "We do the research, make our recommendations, and we also see what goes on after," says Nicolas. "There's value in the continuity. We get to see what happens after our recommendation, and if any issues arise, then we're right there to respond within the pace of what's unfolding."

While the law leaves little wiggle room for interpretation, a particular asset to growing your legal career at an institution is that you see the big picture and get a unique perspective. "You can foresee where your advice is going to go," Nicolas says, explaining how he and the rest of the firm's legal team can anticipate the impact it will have on different scenarios. "With that kind of informed foresight, you can anticipate consequences and change course if needed," he adds.

In fact, according to Nicolas, T. Rowe Price's Chief Legal Counsel always urges the legal team to take the extra step. "And if you get to know the business and if you know what the impact is going to be, you can say to the person that you're working with, 'I think you should do this based on the law, I think this is the best alternative.'" Nicolas finds that the business as a whole appreciates when the legal team takes the time to lay out all the different possibilities.

Now that he's no longer one of the youngest attorneys at T. Rowe Price, he has the advantage of hindsight as it relates to the types of obstacles that attorneys can face. "As lawyers, we're conditioned to always look at the worst-case scenario. We're trained to think, 'How is this all going to go wrong, and how can I avoid everything going wrong?"

As a result, Nicolas was quite hard on himself if he thought he made a mistake. "If I could, I would tell my younger self just to relax," he says. "There's a reason they call it the practice of law. Of course, they tell you this in law school, but until you're doing it, you don't understand that you have to have patience with the practice of it."

Other wisdom imparted onto him during his law school days has also proven correct. "At graduation, one speaker told us that we were going to spend 5 to 10 years of our careers feeling like complete frauds, half expecting security to escort us out because we have no idea what we're doing," Nicolas remembers. "Then we're going to have an 'aha moment' when everything clicks, and we realize we have valuable knowledge and skills to contribute. Also, it's been true— that kind of confidence takes time and experience."