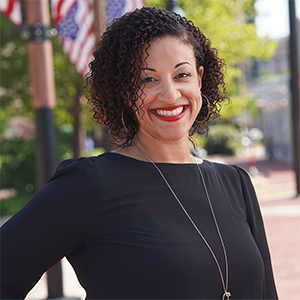 "Starting over was scary, but it’s in that scary, uncomfortable space that real development and growth happens."

As a college student, Courtney Sembly jumped at the chance to intern with T. Rowe Price to learn more about the finance industry. "I had recently switched majors from information technology and was pursuing a degree in financial economics and certification in accounting," she says. Fifteen years later, she's now a Senior Manager of Intermediary Services at the firm. Courtney recognizes that T. Rowe Price afforded her another great opportunity— the freedom to change her mind.

After seven years in accounting, Courtney realized that, although she excelled in her daily role, she wasn't finding enough excitement and passion in it. "I wanted to be closer to the action and to learn more about our products, our investments, and how we make money. Ultimately I discovered that I wanted to be closer to influencing the firm's bottom line," Courtney recalls. So she started to explore other opportunities at the firm, including attending an open house as a part of T. Rowe Price's third-party distribution group, which is now U.S. Intermediaries.

"My current department, U.S. Intermediaries, is one of the more progressive departments here at T. Rowe Price," she says. "They can have a diverse workforce because they are deliberate about sourcing talent from different pools."

That attention to cultivating a diverse workforce worked in Courtney's favor as she wasn't exactly the cookie-cutter applicant for the new role. "I'm not going to say they were willing to take a chance on me. I had already demonstrated experience and success in my previous roles," she explains. "But they were willing to give me ample runway space to get up to speed in the new role." That "runway" gave Courtney the ability to take the required exams and acquire the appropriate licenses for the new position after she was hired.

"Many firms look for someone who is the exact, right candidate at that right moment," she says. "But our department feels strongly about considering a person's capabilities and the skills they're able to transfer from one role to the next."

For instance, while Courtney didn't have any external client-facing experience, she did have internal clients who required her to be responsive as well as resourceful. "Those are two very transferable capabilities to bring to a new role," she says, "and once we start thinking of our resources and our talent in those terms, it allows us to cast a wider net."

Courtney is often the only woman on a team. Consequently, she believes women are less likely to apply for roles if they don't think they fit every single qualification. "Robert Higginbotham, the head of global distribution, has enacted a program called Women in Sales," she says. "It looks at female representation in the sales workforce and takes specific action to increase those numbers."

"For example, when it comes to hiring for sales positions, women may think they have to have extensive product knowledge, investment acumen, and capital market knowledge," she continues, "but those are skills you can read up on, things you can learn."

According to Courtney, sales is much more about building and managing relationships, as well as interpersonal skills, strong communication, influencing, and being resilient and resourceful. "And so, just as much as we look for someone with a technical skillset, those other skills are highly sought after and often harder to find," she says.

As both women and men seek out new roles or move up in management, Courtney acknowledges that another struggle is finding work and life balance. "Many times, the clients I'm working with are located nationwide," she explains. "So I may have a West Coast client who requires my attention at the same time I'd be putting my kids to bed. Some of my colleagues have clients around the world so their day could stretch even longer than that."

On a personal level, Courtney believes the solution lies in being honest about the responsibilities that pull your attention away from home as well as the support system available to you. The other key to attaining balance is having an employer that embraces flex schedules. "T. Rowe Price does a good job of that," she says. "There's a formal program for flexible work arrangements that allows people to build in the flexibility they need – when and where they work. It's important, not only to those of us in the firm currently but to our strategy of attracting talent."

Beyond being clear about work and home responsibilities, Courtney advises those thinking about entering the financial services field not to get too comfortable. In her own experience switching roles, she went from being the subject matter expert on her team to the person who knew the least in the room. "Starting over was scary," she says, thinking back, "but it's in that scary, uncomfortable space that real development and growth happens."