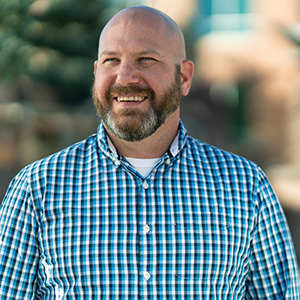 “When applying for a new position my manager was really good about helping me identify my strengths and weaknesses and encouraged me to step outside my comfort zone. We looked at a lot of the skills I learned in the military and how those translated to my work at T. Rowe Price.”

Chris Barry became convinced T. Rowe Price was an ideal place of employment after attending some of his wife's work functions like softball games. She had worked there for seven years before he came on board. "You can tell a lot about a place from the people and the way they talk about it," Chris says, noting the employees' professionalism and friendliness. "They all showed respect for one another."

That camaraderie struck a chord with Chris, who had spent seven years in the U.S. Army and another decade in the National Guard. Even in his new, civilian life, he remains motivated by the military saying, "one team, one fight." And now as a Fulfillment and Project Coordinator at T. Rowe Price, Chris realizes his time in the military helped him manage different relationships within a larger organization.

"In the service, you work with different brigades, battalions, and companies," he says. At T. Rowe Price, Chris has also worked with colleagues in a variety of roles like administrators, as well as legal and conversions groups. "Each one of those groups has their own personality types," Chris explains. "You have to be able to recognize how to leverage a specific personality type to achieve a certain outcome."

The transition from military to civilian life wasn't exactly seamless. "I was always on the move while in the military, whether I was working in logistics, transportation, or artillery. Over 12-hour days, it was always go, go, go," Chris says. "Now I'm at a desk for around eight hours a day. At first, it was an adjustment not to go stir-crazy as I was going from an extremely active pace to being relatively stationary." Chris, who has now worked at T. Rowe Price for eight years, makes it a point to step away from his desk throughout the day, go for walks, and hit the gym at lunchtime before returning to work.

He also says the firm has been incredibly accommodating regarding his and his wife's work schedules. It ensures that someone is always available for their children."If something comes up with the kids, both of us have the flexibility to work from home," he says. "If I haven't finished my project, I can go home and finish it up. T. Rowe Price is very accommodating in that way for having families."

Chris was also able to continue his life in the service. During his first five years at T. Rowe Price, he also served as a Staff Sergeant in the Colorado Army National Guard. Chris is now active with the firms veteran group, VALOR @ T. Rowe Price, which helps veterans achieve successful post-military career transitions and goals.

"Those coming from the military have a lot of good values and ethics," he says. "Those are the people you want to work with because they made a commitment, and you know they can get the job done." But according to Chris, many veterans don't think of their existing skills as easily translated to the financial industry. "So we're going to career fairs, attending and hosting networking events, and trying to get our name out there in the military community," says Chris. He believes there is a vast pool of talent available from the five military bases in Colorado Springs alone.

Chris often tells fellow veterans that T. Rowe Price offers excellent work-life balance and offers support, encouragement, and opportunities to their associates. "I was looking for some new positions because mine was phasing out. My manager motivated me to step outside my comfort zone and sell what I was really good at," Chris recalls from his own experience.

As he reflects on his career path from Army Corporal to a coordinator in the finance industry, Chris says it's crucial to stay open and flexible. "When opportunities come, you've got to be able to reach out, grab them, and then follow through with them."